Up pops someone’s face on your smart phone. Will you accept or reject that person in your hunt for a soul mate or a hookup? Zoosk and Tinder apps offer similar means of seeking a relationship. Tinder,  available for free on iPhone and Android was voted the Best New Startup of 2013 by TechCrunch. It grabs images from Facebook from a user designated geographic area and matches those people with your idea of the perfect mate. Zoosk hopes to win awards soon in the IPO arena.

It is said “A picture is worth a thousand words” which is lucky for Tinder advocates because they only have 500 characters to wow people with who they are. If you aren’t one of the most attractive people whose face is being flashed to potential suitors, it will take more than an average of 100 words to ensnare a potential date. Be careful of the direction you swipe that image or whether you tap the X or the Heart. Even a beauty can end up with a beast.

On line dating has been around for some time. Lots of Lonely Hearts Club members keep the cash registers of those apps ringing even if wedding bells rarely result from their search.

Investors keep the hopes of romantic startup companies high. In March, an analyst upgraded the parent company IAC who owns Tinder to a ‘buy’ rating. That may or may not reflect on the quality or promise of the dating service itself. IAC’s portfolio also includes non-love-affair-focused websites Ask.com, About.com, HomeAdvisor.com that seeks to hook you up with a home improvement professional, not with a one-night stand, and Vimeo.com. 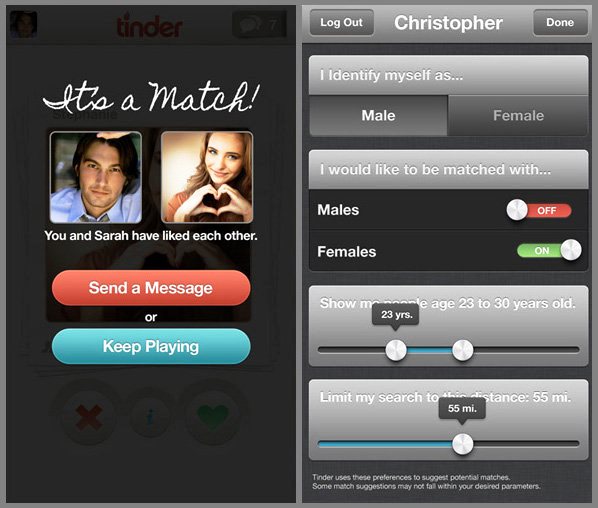 Zoosk uses a Behavioral Matchmaking engine where you just click and it builds a preference profile for you. Zoosk is hoping potential investors throw not only kisses, but cash its way. With revenues last year over $178 million accompanied by declining expenses it has a more solid financial basis than other tech companies with notorious IPO’s. Comparing revenue to number of employees, Zoosk chalks up about $1 million per employee. In contrast, IAC revenue per employee is slightly less, at $755,747.

Zoosk garnered more than $60 million in VC backing before filing an initial S-1 this week. The company is hoping to raise another $100 million. Currently, co-founders Shayan Zadeh and Alex Mehr and three VC companies hold a combined 90 percent interest. The shares will be traded under the symbol ZSK on the New York Stock Exchange.

Competition in computer dating is solidly in place with the likes of Match.com and. eHarmony which for example holds 23.5 percent market share. Zoosk lags far behind with only 7.7 percent penetration, even though its 650,000 subscribers are distributed worldwide. It doesn’t help that Tinder which was started by four entrepreneurs is backed by IAC, the parent company which also owns Match.com. This upstart claims to be generating 10 million matches per day. The question is: How long does a subscriber remain a paying customer? Weddings result in membership loss as people remove themselves from the dating scene or people simply tire of the superficial approach most on-line dating services offer.

If you think there’s competition in the bar scene for finding a date, try competing with all those flashy photos thrust on your smartphone one after another after another.