AMD has been working on enabling their customers and partners to be able to create new and exciting products that utilize their technology, and with the final launch of Beema and Mullins we finally see what all the hubub is all about. These are going to be AMD’s latest offerings for the mainstream APUs and for low-power with Beema being the mainstream APU and Mullins being the low-power APU, even though both of them are fairly low power as it is already. With the introduction of these new chips we will be seeing AMD increasing the CPU and GPU performance while simultaneously reducing power consumption and improving overall performance per watt to levels that AMD has never seen before. AMD claims that their new APUs are capable of compute performance per watt levels that their competition can’t even touch, even though there are realistically very few scenarios today where you can easily compare compute performance in applications. Compute performance is going to be important, it is just a matter of time until it happens and it seems to be taking longer than everyone had thought. 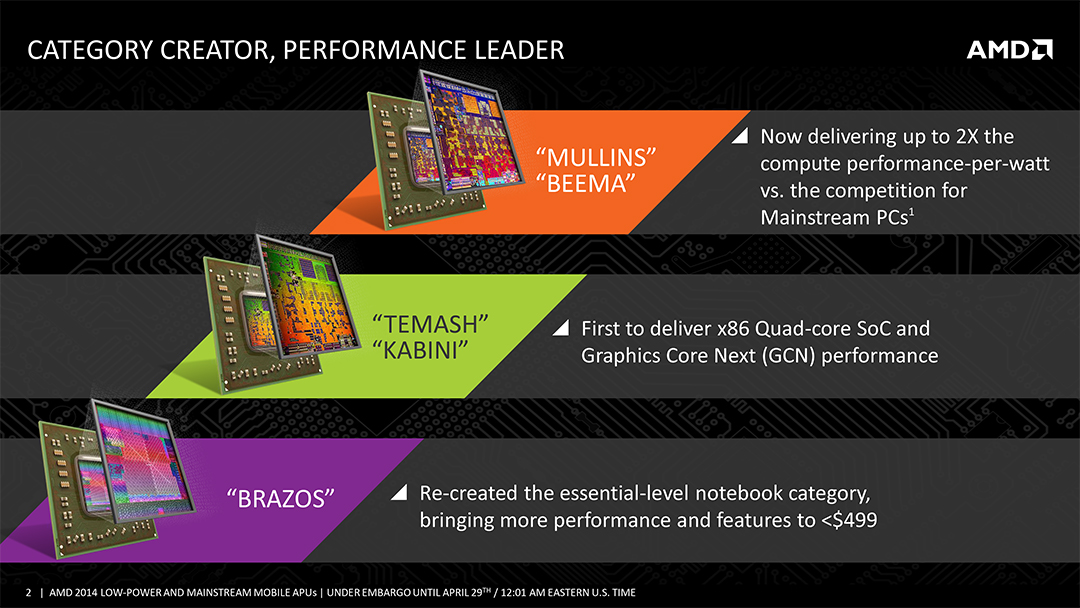 With the introduction of both of these new APUs you are getting new Puma+ cores, updated GCN cores, system-aware power management (and battery boost), the Cortex A5-based hardware security platform, DDR3-1866 support and some pretty decent overall frequency improvements at lower TDPs.

Below, you can see that there are going to be four Beema series APUs, with two being A-Series and two being E-Series with varying GPU and CPU clocks but fairly similar TDP. Meanwhile, Mullins will be shipping in three different SKUs with two being A-Series APUs and one being an E-Series. All of Mullins’ TDPs are sub 5w and their SDP (I don’t like that they’re going along with this) is sub 3w.

In addition to the bumps to CPU and GPU clocks and performance, they have included the AMD Platform Security Processor, which is a dedicated hardware security ARM Cortex A5 chip designed along with ARM’s TrustZone in order to follow industry standards and to enable better usability in the enterprise. This is the 1st and only x86 processor to integrate an ARM core on-die. 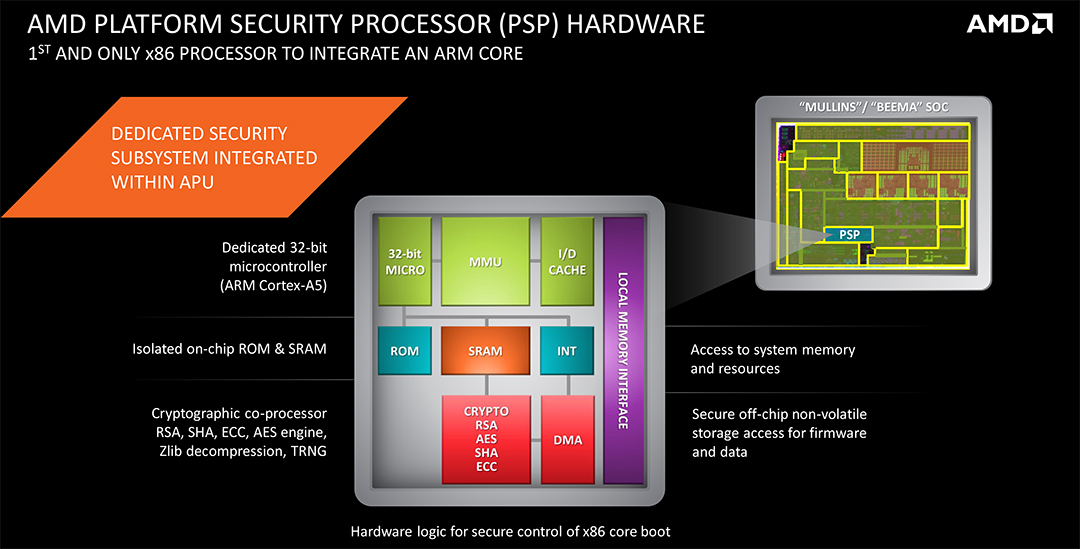 In Futuremark’s PCMark 8 and 3DMark, AMD’s Beema APU takes some competition to Intel’s lower-end parts, which bodes well for AMD’s ability to sell cheap chips, but the lack of a real high-performance low-power part is still a bit concerning. And yes, we know AMD crushes in OpenCL they always have against Intel and Nvidia.

Here you can see how Beema compares against Kabini in terms of power consumption and battery life, delivering a reduction of upto 20% power reduction.

AMD also introduced some really interesting power management and power reductions with Beema and Mullins, especially with Mullins in the tablet formfactors. The creaction of the STAPM or Skin Temperature Aware Power management is definitely something that a lot of companies should take into consideration and shows some real creativity on the part of AMD to utilize as much available TDP comfortable to the user as they can. 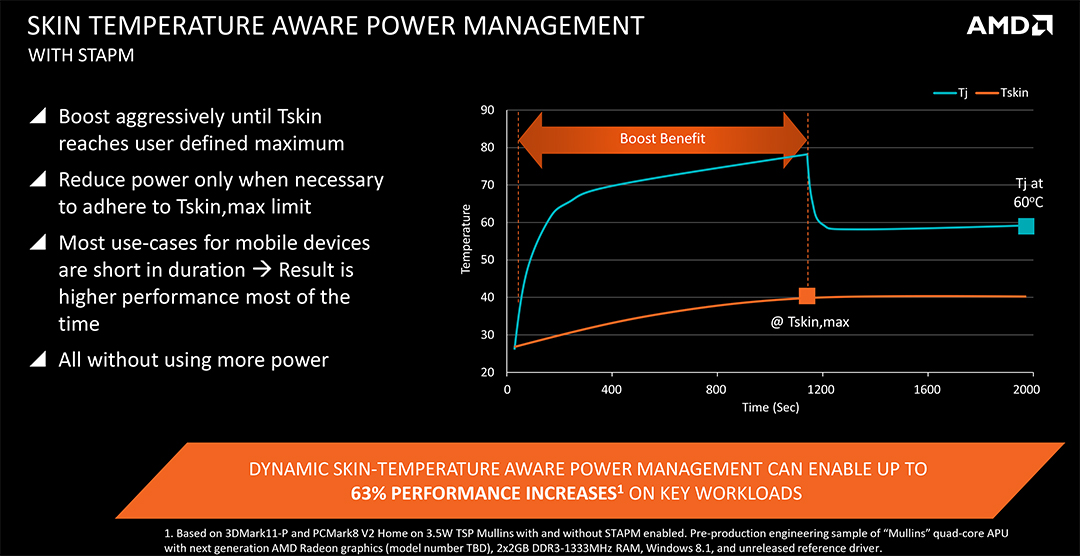 Here you can also see the CPU and GPU core architecture enhancements that AMD made in order to reduce power consumption while simultaneously increasing clocks and performance. AMD reduced the leakage of their Puma+ cores by 19% and their GCN GPU cores by more than 38% which attributes to a lot of lower level power consumption savings. 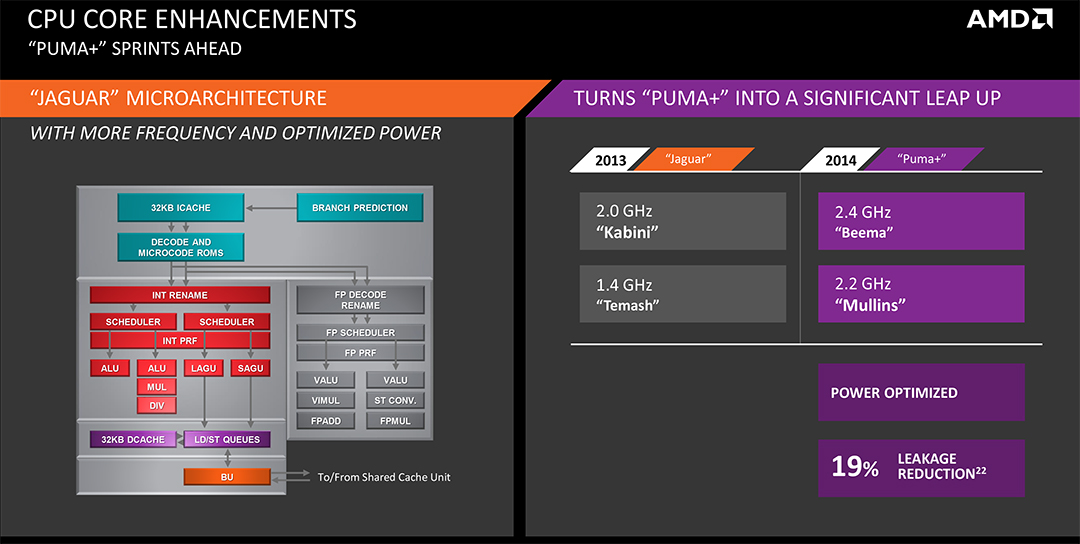 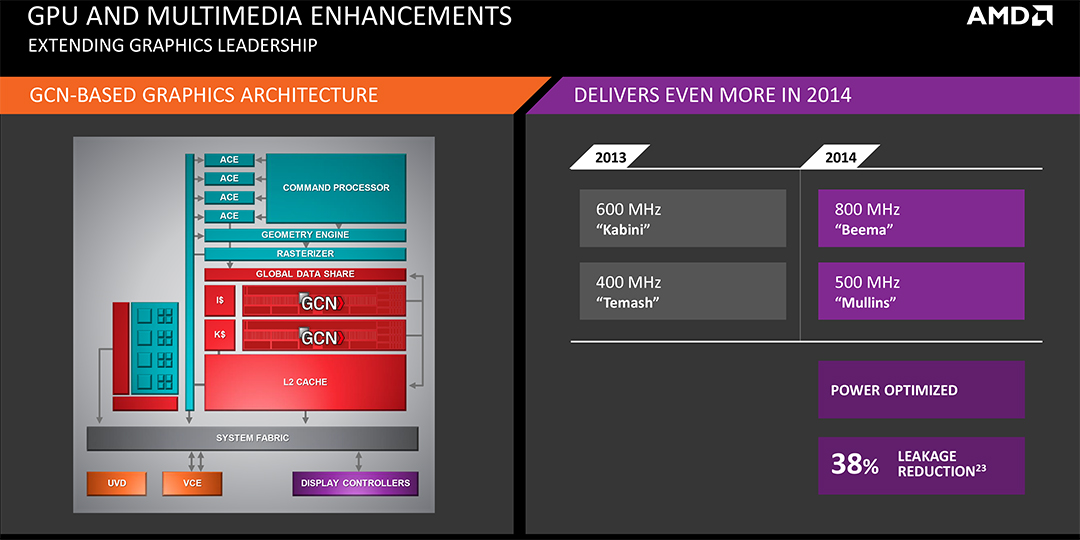 AMD also says that Beema and Mullins APUs are merely the beginning of the company’s strategy towards reducing power, increasing overall performance and making things smaller, but for us, the most interesting thing to see will be how they get HSA to work in lower power parts and when we can really see some real HSA applications across AMD’s entire product stack. 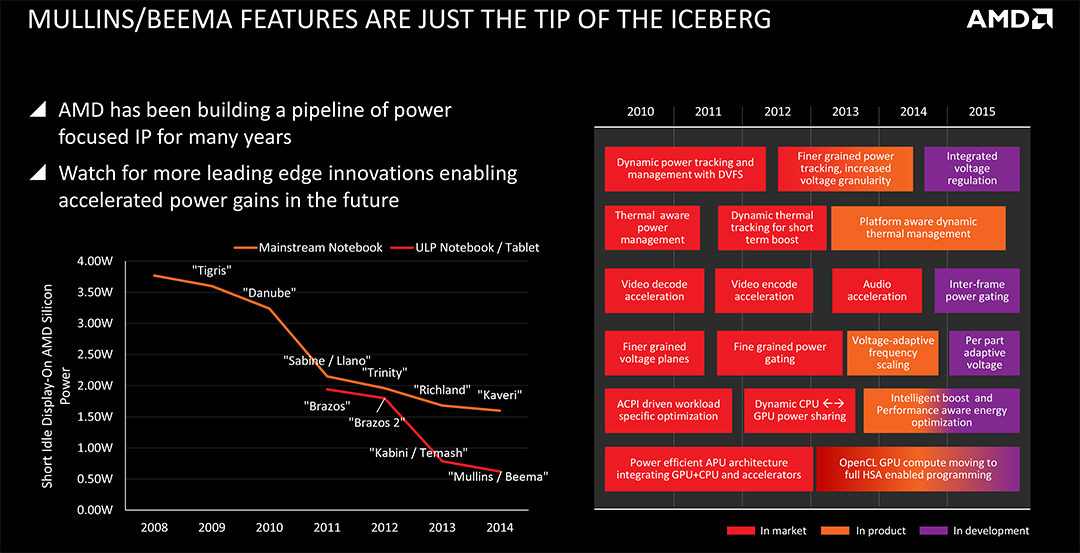 I personally can’t wait to see what kinds of products come out of AMD’s partners as a result of these developments and what interesting formfactors they’ll come in. Because at CES, AMD had some really impressive prototypes for gaming, TV and much more. Hopefully some of their partners are encouraged by these prototypes to think of something even better.