Today T-Mobile announced the closure of their deal to acquire 700 MHz A-Block spectrum from Verizon, which was originally announced back in January. This A-Block of spectrum was purchased from Verizon to the tune of $2.4 billion and gives T-Mobile some very high-quality spectrum in areas where it is most needed. The deal also supposedly gives T-Mobile some AWS spectrum as well, to help them shore up any holes they might have in their existing AWS spectrum holdings. Ultimately, though, T-Mobile wants this A-Block spectrum so that they can enable much higher speeds and better overall bandwidth to their customers. They will likely accomplish this through carrier aggregation with various different 10 or 20 MHz blocks of spectrum. 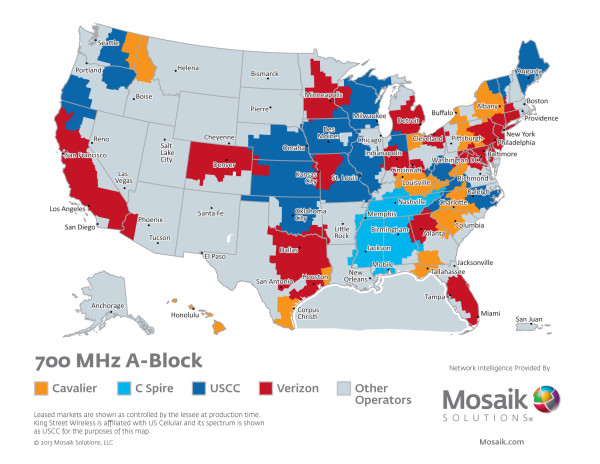 As you can see from the Map above, Verizon’s 700 MHz A-Block holdings are the vastest and cover cities like Los Angeles, San Francisco, Dallas, San Antonio, Houston, Kansas City, Denver, Minneapolis, Atlanta, Miami, Tampa, New York City, Washington D.C., Philadelphia, Baltimore, Detroit, Cleveland and Cincinnati. All of the customers that reside within these cities should expect to see the benefits of living in a T-Mobile market with A-Block 700 MHz spectrum, and to see those benefits within the next year or so. Keep in mind that T-Mobile went from Zero LTE coverage in March of 2013 to Nationwide LTE coverage in September of 2013, so we could realistically see this new spectrum getting utilized possibly by the end of the year.

In fact, T-Mobile states that they expect to actually have this service rolled out by the end of the year, which is by their own words, wicked fast. In fact, such fast and robust rollouts may be one of the primary reasons why T-Mobile has managed to actually steal away customers from their competition in ways that their competitors never thought possible. T-Mobile isn’t really just fighting with them on price, they’re also fighting with them on speed and coverage. There are some places that I go where I am shocked to find that I have T-Mobile service but no Verizon service and not just that, but I have T-Mobile LTE service in those areas and nothing from Verizon. With T-Mobile’s expanded spectrum holdings in these lower frequency blocks, I would expect to see T-Mobile recreating such an experience in many urban centers where their low-frequency signal is capable of penetrating more urban landscapes.