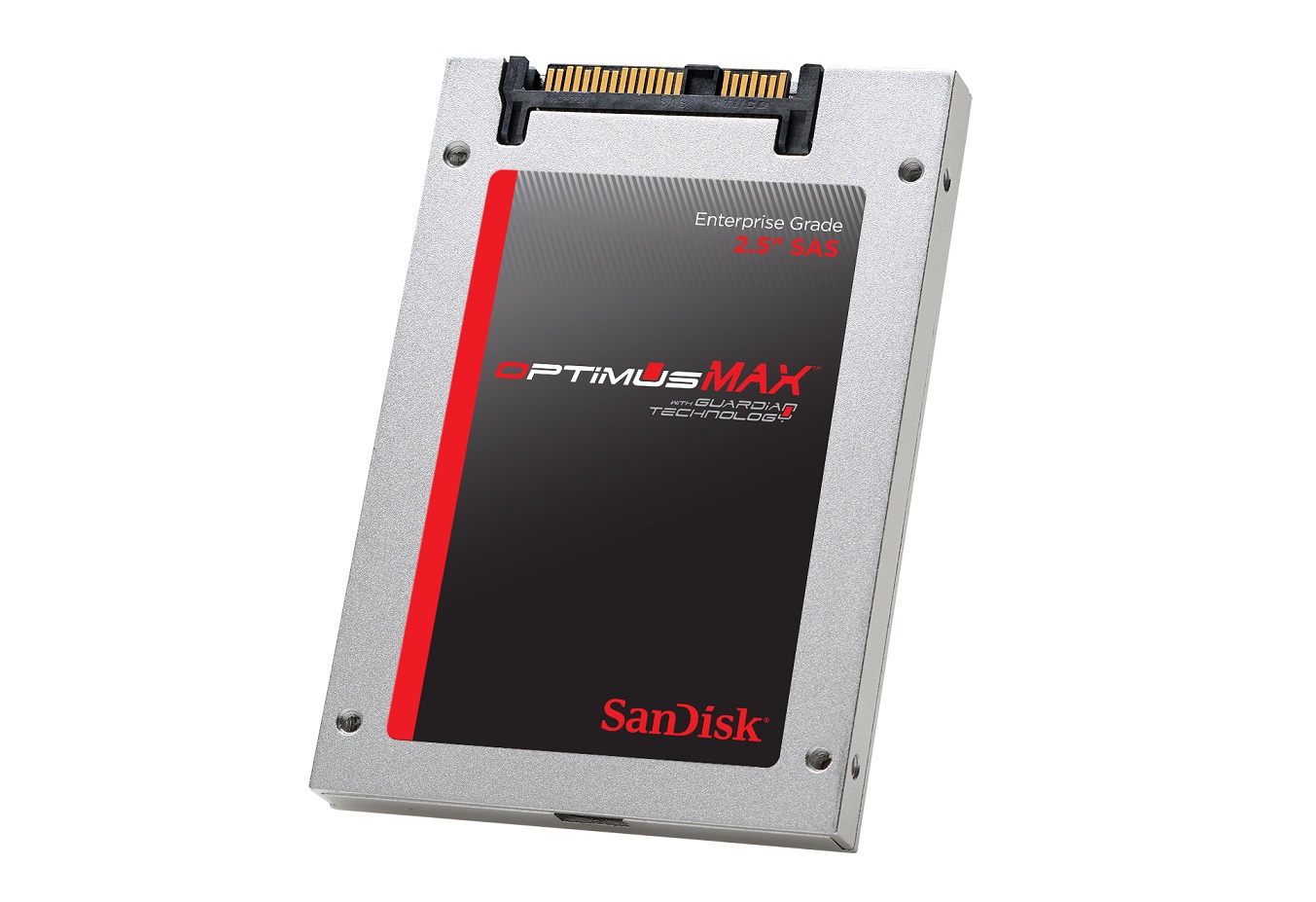 There is no denying that SSD capacities have been steadily increasing with each generation of NAND improvements and with newer and newer controllers. But the holy grail has always been how much capacity can you fit into a 2.5″ drive since that is the most commonly used form factor for more enterprise drives nowadays. As such, it was astonishing to hear that SanDisk was able to cram 4TB of solid state storage into a single 2.5″ drive, which supposedly isn’t the end of SanDisk’s innovation. The SanDisk Optimus MAX SAS SSDs are specifically designed to replace spinning 10k and 15k RPM 2.5″ HDDs and to do it without compromising on performance or capacity, in fact, with the new 4TB drive (if you can afford it) you can actually get far more capacity than with a traditionally 600GB 15K RPM drive. If you go down towards a 10k RPM drive, you can probably get a drive up to 1.2 TB, but even then you’re nowhere near 4TB or anywhere near the IOPS that the SSDs are capable of delivering.

The drive’s performance numbers are using SAS 6Gb/s (they have a different series of drives that are SAS 12Gb/s) sporting a Sequential Read/Write (MB/s) of up to 400/400 MB/s and random read/write IOPS of 75K/15K. This is all backed by SanDisk’s 5 year warranty which covers the drive for at least 5 years or until the drive is ‘worn’ down completely (which ever comes first). The reason why this drive is capable of such speeds and such capacities in such a form factor is because SanDisk is using their new 19nm eMLC NAND which is going to give the drive unbeatable capacity. Even more importantly with the 19nm eMLC, this drive will be capable of unparalleled writes compared to most other MLC-based enterprise drives, which will give it fairly good performance but unparalleled longevity and stability, which is ultimately the most important thing when replacing 10k and 15k RPM spinning disks.

There are talks of SanDisk introducing 8TB and 16TB models of the Optimus MAX drives down the road, but as of right now, the 4TB drive is the biggest that SanDisk is offering, but enables petabytes of SSD storage per rack rather than per row. In fact, if you went with a Supermicro SC417E series server, which is only 4U. You could cram a massive 288 TB of SSD storage per server, meaning that you could get 1 Petabyte of SSD storage in essentially half a rack, or around 2 Petabytes per rack. Keep in mind, that this isn’t even possible with spinning disks as the 2.5″ drives are only capable of capacities of up to 2TB per disk and even those are rare. There’s no denying that these 4TB drives are going to cost a pretty penny, but they consume very little power, generate very little heat and cause zero vibration which means they don’t negatively affect each other’s longevity like a lot of other spinning disks do when they’re installed in high density clusters.

I’m excited to see what Seagate’s competitors can come up with, namely Toshiba and Samsung, but as of right now they are the high capacity kings and they’re probably going to win some serious business because of it.