The FCC recently decided that they would have a Twitter chat with the public via Twitter using the hashtag #FCCNetNeutrality. Using this hashtag, for an hour, Gigi Sohn the FCC’s Special Counsel for External Affairs would answer questions for the FCC’s Office of the Chairman. Which would essentially mean that she is representing the Chairman, Tom Wheeler, even though he didn’t participate directly in the chat itself. So many people started asking questions and tweeting and retweeting the #FCCNetNeutrality hashtag that it became the number one trending topic on Twitter at that time. 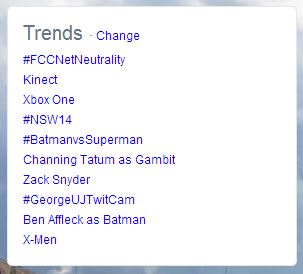 In addition to responding to users that tweeted the #FCCNetNeutrality hastag, Gigi Sohn actually responded to me as one of the people asking about Net Neutrality. I was complaining (as us journalists usually do) about the fact that the FCC is constantly talking about and asking about comment from the public but doesn’t actually tell us how our comments affect their decision making process. Surprisingly enough, Gigi responded directly to me, which I must admit is very honorable of her to do considering how hostile much of the Net Neutrality crowd has been. Most of my negativity about this comment process has been with the fact that the email responses that I got from Chairman Wheeler and the Open Internet initiative were effectively the exact same email with a few formatting differences. Sure, they were probably getting bombarded by the public, but that’s kind of their own fault, really. 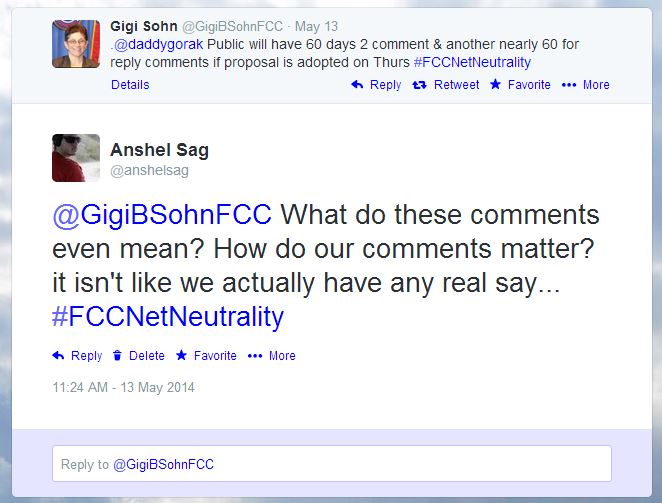 Ultimately, it appears that the FCC is being somewhat responsive to the public’s desire to be heard and protect the internet. The way that FCC Chairman Tom Wheller talked about Net Neutrality with his Open Internet initiative simply didn’t rub a lot of people the right way. This is primarily because of the vague nature of his proposal and the fact that it didn’t really protect the internet in a way that would make it the successful medium it has been for so long. Obviously, his past reflects quite poorly upon his motives and a lot of people question whether or not the FCC is capable of properly regulating the ISPs considering how many of them are former telecom executives and how many of them will likely go back to working for those companies after their terms end.

There has been a lot of talk that if the FCC wants to regulate Net Neutrality and protect an ‘Open Internet’ that they should reclassify ISPs as common carriers and to regulate them that way. However, many people, including Tom Wheeler see that as a nuclear option, even though they haven’t quite explained what is wrong with that perspective on things. After all, the current ISPs have already taken $200 billion of our money to build a nationwide broadband fiber service and to this day we basically haven’t seen a shred of that. Meanwhile, the ISPs continue to charge more money for worse service while claiming that they are getting better and better as the US gets left behind by countries like Korea.