We got a unique opportunity last week to benchmark Qualcomm’s latest SoC using their reference platform MDP (mobile development platform). The Snapdragon 805 MDP itself is basically how Qualcomm launches a new SoC by releasing a reference platform to allow developers and manufacturers to see the maximum capability of the SoC and then to build their hardware or apps based upon those possibilities. The Snapdragon 805 itself is Qualcomm’s latest and greatest SoC and is what they believe to be the premier ‘built for 4K’ SoC that we’ll likely see in smartphones and tablets later this year. 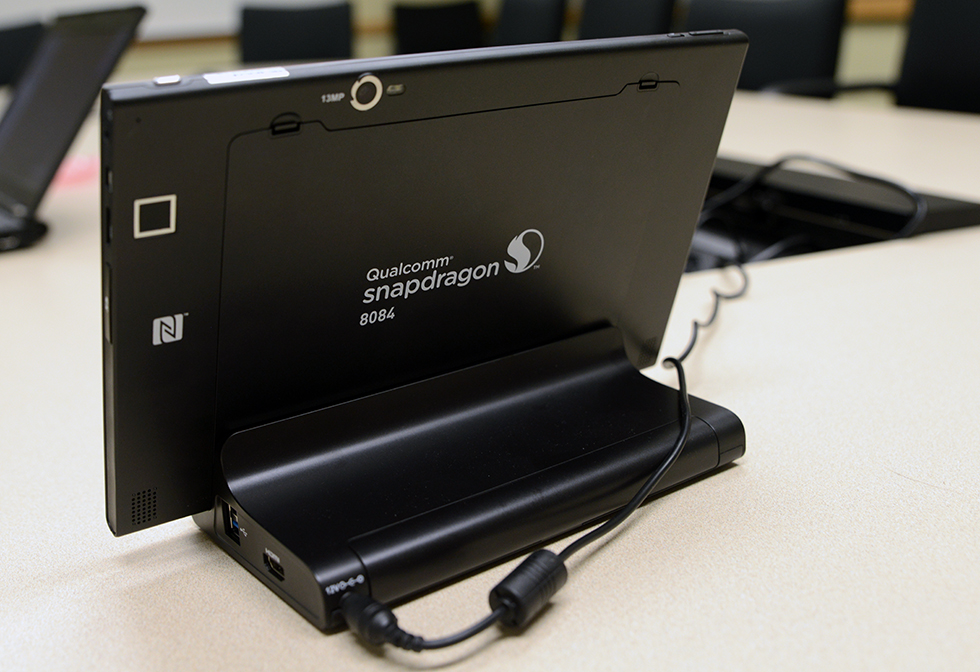 Snapdragon 805 MDP on the powered dock

For the Snapdragon 805 MDP tablet itself, we have a hands-on video that gives you an idea of what the tablet looks and feels like as well as what kind of connectivity it has. If you’re not particularly interested in watching the video you can see the images below the video or head over to Intrinsyc’s site and check out the tablet for yourself.

You can also get the various features and specifications of the Snapdragon 805 MDP in the images below provided to us by Qualcomm. 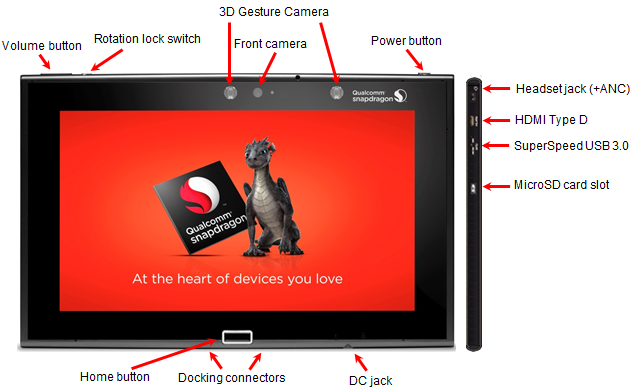 The tablet is powered by a 3400 mAh battery which is fairly small for a tablet, but the battery is also a lot less relevant in terms of size when looking at a development platform. Especially since this tablet comes with a dock that is powered and has a USB 3.0 and ethernet hub. It also has a multitude of microphones (7), gesture cameras (2) and a 2 megapixel front-facing camera and a 13 megapixel main camera. It also has a fingerprint sensor and stereo speakers in addition to the expected MicroUSB 3.0 connector and microHDMI connectors you saw in the photos and videos above. Don’t forget, it also supports MicroSD, meaning that you could get up to 128GB of additional storage to the already built-in 64GB of eMMC.

Do keep in mind that this Snapdragon 805 is an APQ8084 which means it is an applications processor only and is manufactured on the 28nm HPM process. We may eventually see a version of the 805 with a modem attached to it, but realistically Qualcomm has enough products coming down the pipeline like the 64-bit capable Snapdragon 808 and 810 that an integrated 805 doesn’t make much sense. The SoC is also capable of supporting image sensors of up to 55 megapixels and stereoscopic 3D, even though use of that is fairly uncommon. It also enables users to have 4K playback with H.264 (AVC) and H.265 (HEVC) in hardware as well as 4K capture with H.264 (AVC). The Snapdragon 805 doesn’t have an H.265 hardware encoder yet, but I would expect future SoCs to once the standard is nailed down.

We wanted to run more benchmarks, but not all benchmarks ran on all systems, so we narrowed it down to the benchmarks where we had the best amount of data. 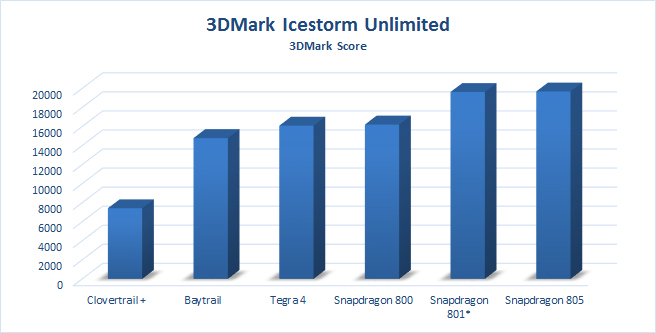 In 3DMark we weren’t surprised to see the results we got as most of the SoCs performed well within their expected figures. The Snapdragon came in with a score of 19,676 which was nearly matched by the Snapdragon 801, which peculiarly performed much better than expected until we remembered that HTC was boosting their smartphones’ performance in benchmarks. The Snapdragon 800 is much closer to where the 801 should have scored, which means that the 805 is a solid 20% faster in 3DMark than the Snapdragon 800. 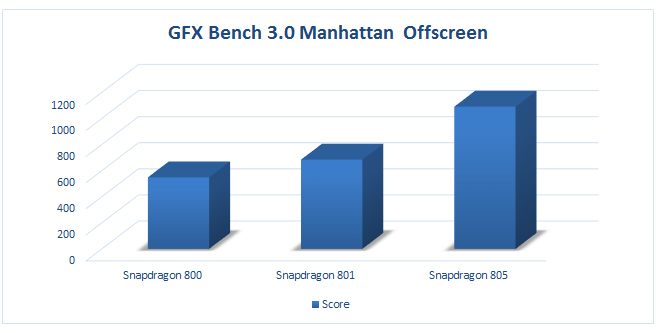 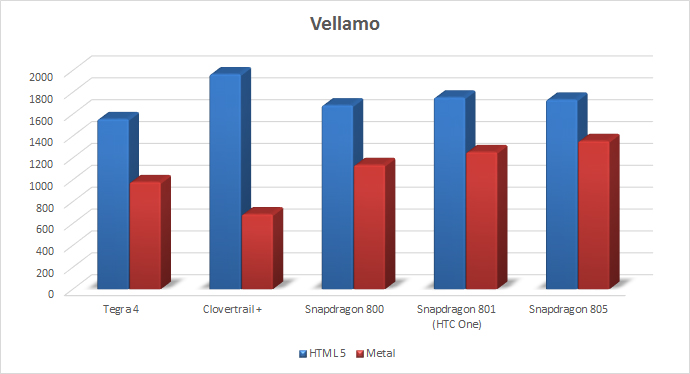 In Vellamo, a Qualcomm HDML 5 and CPU benchmark, we saw pretty much the same trend as we did in the previous benchmarks with the exception of the Clovertrail+ HTML5 performance on the Dell Venue 8 which was leaps and bounds ahead of everyone else’s. However, their overall CPU performance wasn’t so great and actually came in last. Unfortunately, we weren’t able to run this test on our Baytrail tablet since it was a Windows tablet and this is an Android benchmark. We also saw the Snapdragon 801 overperform again on the HTC One M8 with it outperforming the Snapdragon 805 in HTML5 even though we know that isn’t really the case. In the Metal CPU test, however, the Snapdragon 805 still took the performance crown. 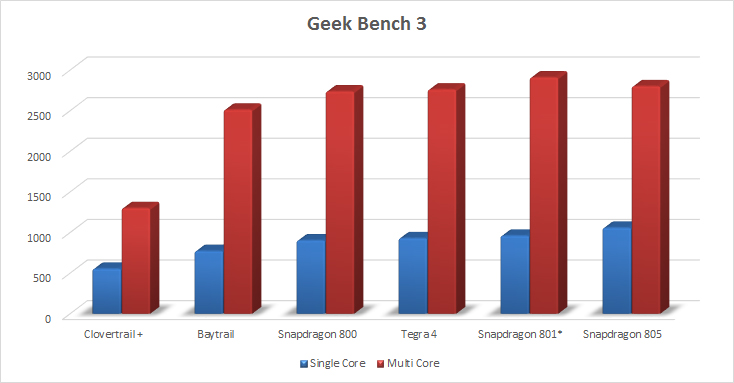 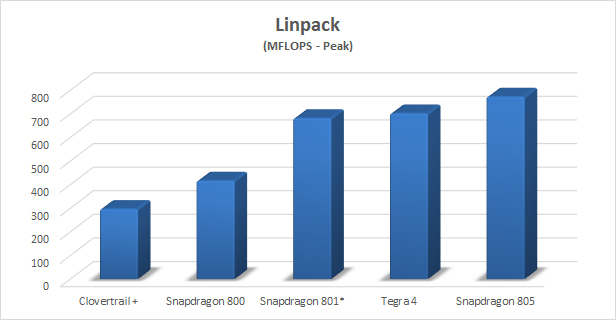 Based on our benchmarks, there’s clearly no doubt that the Snapdragon 805 is the new king of the Qualcomm Snapdragon family of SoCs and the current crop of mobile SoCs as a whole. Obviously, these benchmarks need to be taken with a grain of salt because performance varies between device manufacturers and their system designs. The expectation for the Snapdragon 805 is that it will enable users to properly experience the full 4K experience end to end. In smartphones users likely won’t experience 4K on their devices directly, but they will still be capable of quality capture and playback. And in tablets, we will likely see 4K tablets with the Snapdragon 805 probably launching later this year.

The Snapdragon 805 is a great chip and we will have to wait until we see consumer devices in order to see real performance as well as battery life. As it stands right now, we weren’t given any figures on battery life, which should theoretically mean that we should expect the same level of power consumption as we saw from the Snapdragon 801. After all, this is still a 28nm chip and there is only so much that you can do to improve performance. We do know that the Snapdragon 805’s GPU, the Adreno 420 does have reduced power consumption but it is also a bigger more powerful GPU as well, so I wouldn’t expect much difference especially when driving higher resolution displays on the 805 compared to older SoCs.