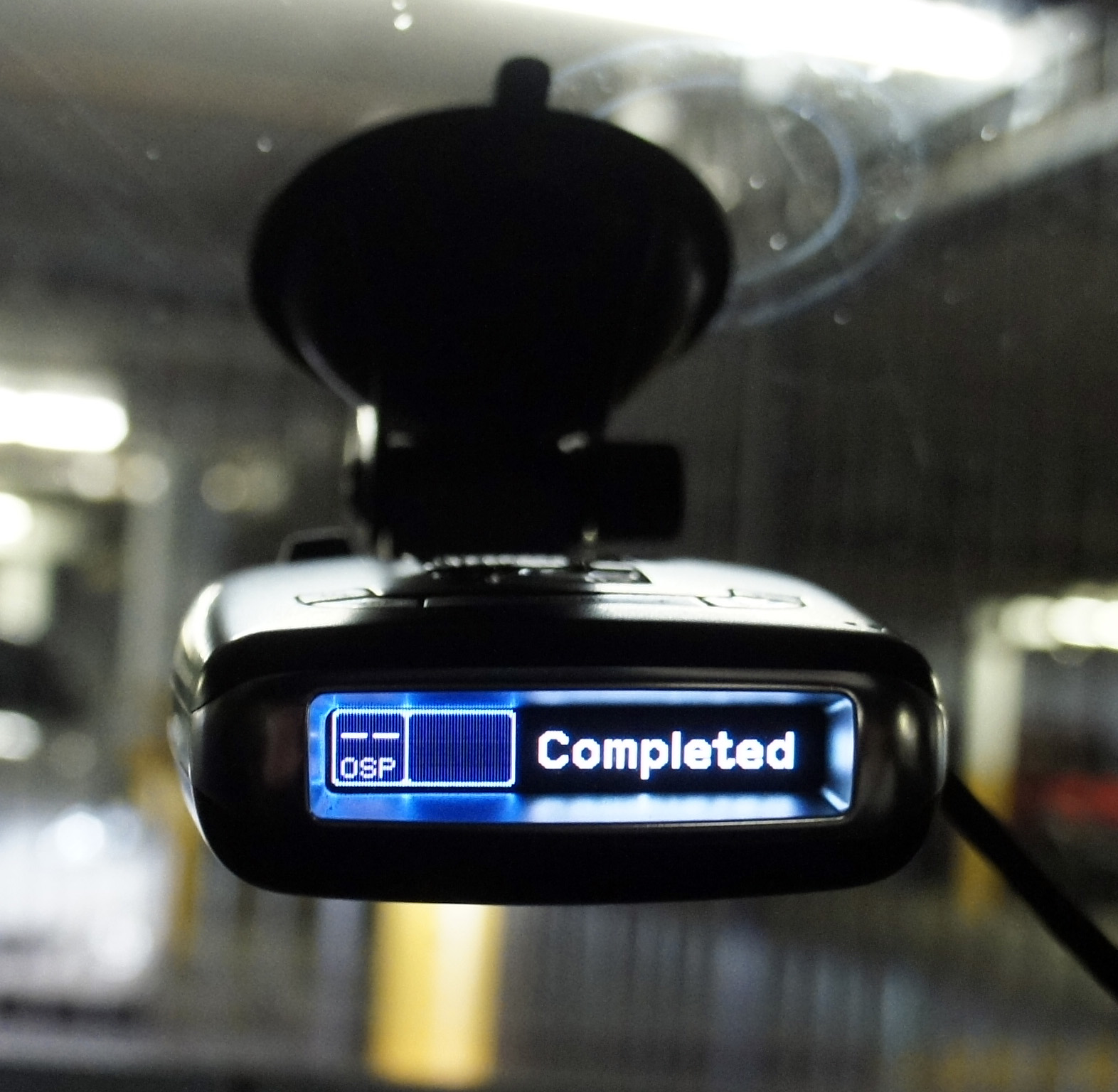 Today we’re taking a look at the Escort PASSPORT Max radar detector. I’ve been using the PASSPORT Max daily for the past year or so, so I’ve gotten a pretty good sense of how the device works and how useful it is.

Let’s start off with the unboxing.

The PASSPORT Max came in a simple box, which contained the radar detector, the SmartCord power adapter, the StickyCup Windshield Mount, the manual, and a soft carrying case for the detector and accessories. In addition, I also received a SmartCord Live to utilize for the purpose of the review. 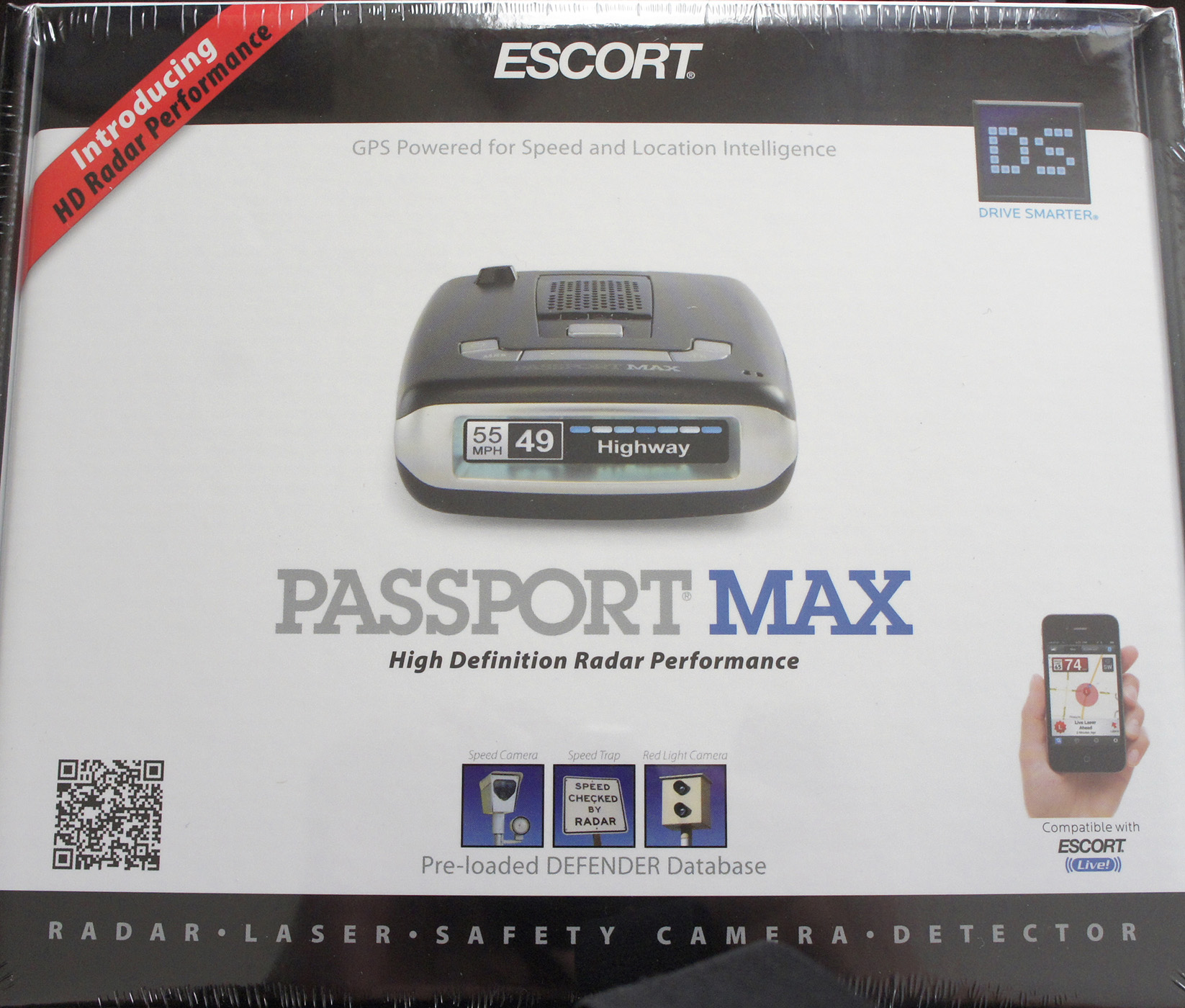 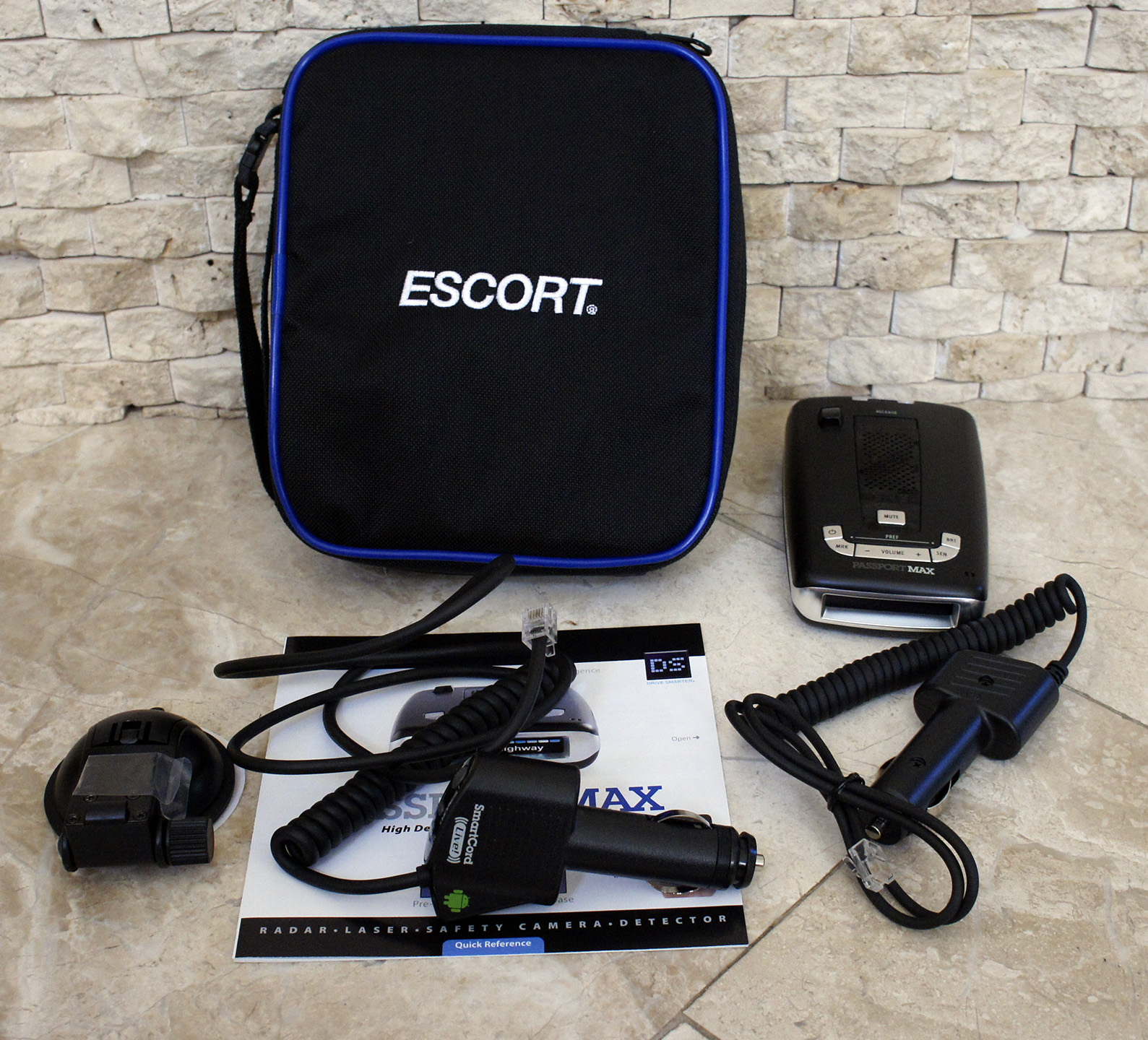 The PASSPORT Max is easy to set up, just place the StickyCup Windshield Mount in the center of the car’s windshield, and push in the locking mechanism. Then slide the PASSPORT Max onto the mount, and plug it into the car’s power port.

I was extremely impressed with the StickyCup mount, it feels very solidly attached to the windshield, and has never come even slightly loose in the past year of use. It can easily be removed and adjusted or moved to a different car, something I’ve done on many occasions, with no loss in suction capability. 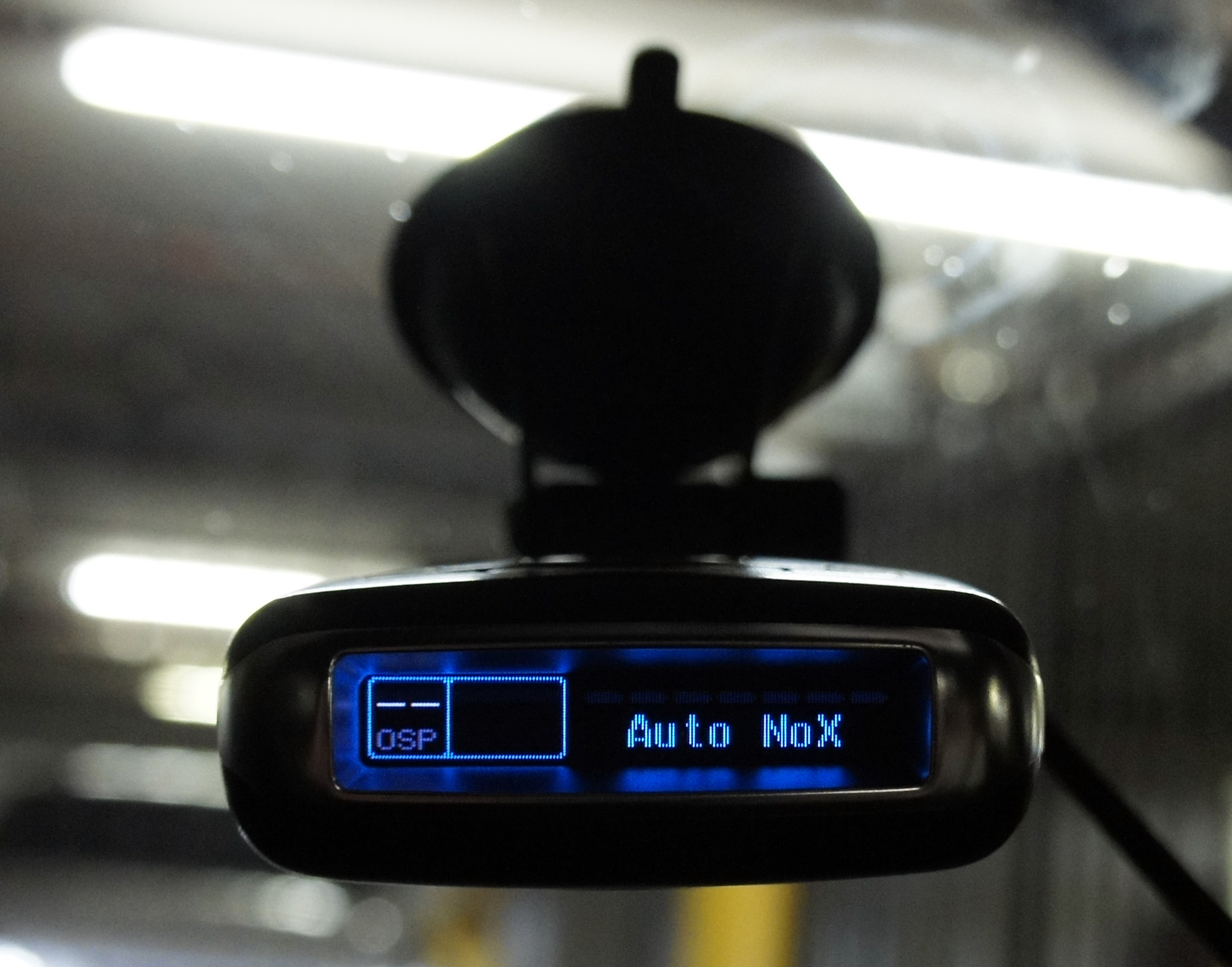 The PASSPORT Max has a variety of different settings and options, however, rather than cover all of them, I’m going to talk about my user experience with them, what I liked, and what I didn’t. The full list of options and abilities can be found in the PASSPORT Max’s manual.

I chose to use the PASSPORT Max in Standard mode the vast majority of the time. However, it has four options: Simple, Standard, SpecDisplay, and ExpertMeter. 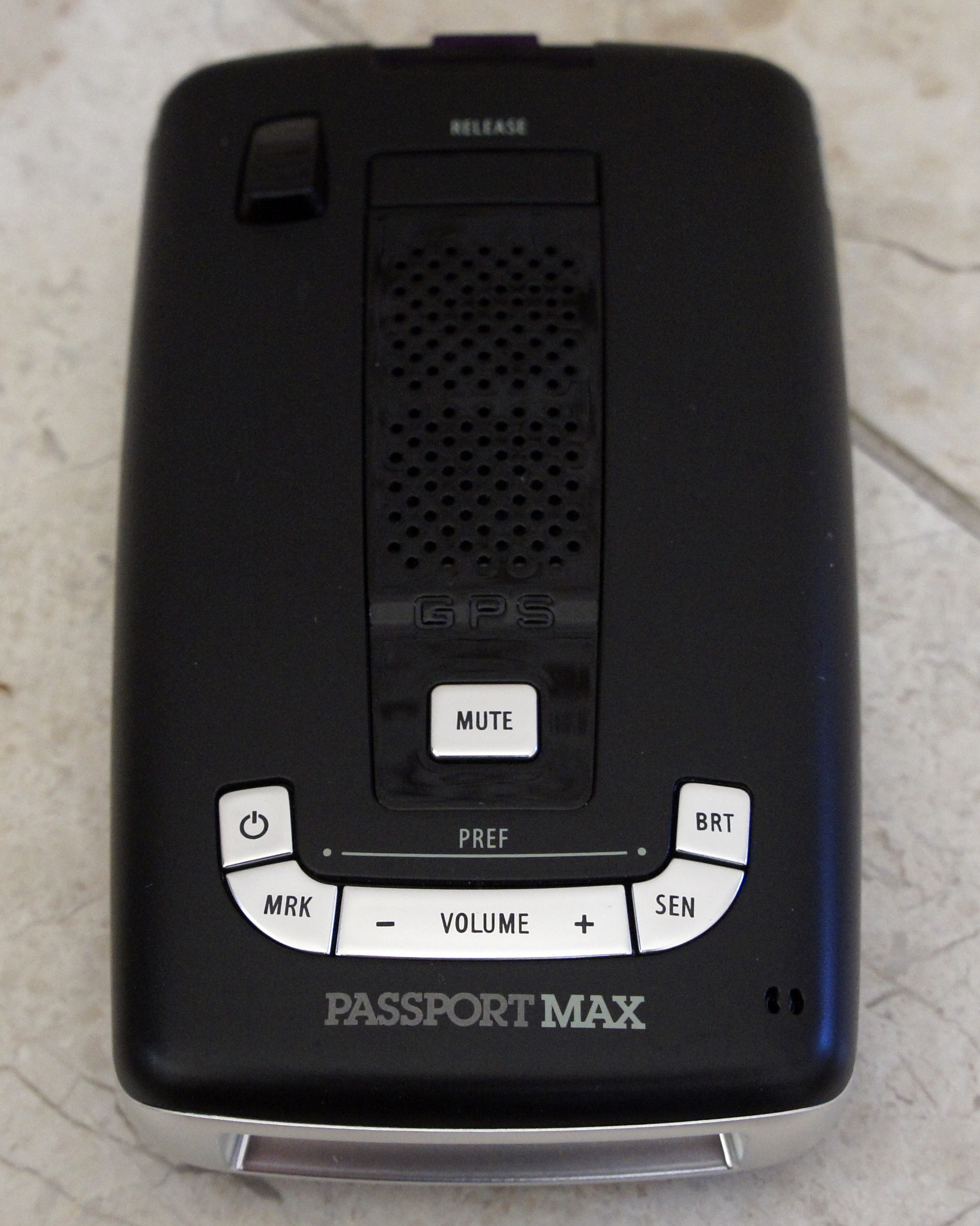 The Simple mode is for people who just want to get warnings of when to slow down or be cautious without actually caring what type of band is being detected, although these can still be set in the preferences.

The Standard mode shows the user the current band being detected (X, K, KA, Laser) and what the signal strength of the band is. It shows whichever signal it believes is the greatest threat.

The SpecDisplay mode is almost identical to Standard mode, but it also shows the user the actual numeric frequency of the detected band.

The ExpertMeter mode shows bars for all the signals at the same time, and has a meter for each one that fills up based on signal strength.

I found that Standard mode did everything I needed and did so with an intuitive display.

The PASSPORT Max has an option called Overspeed Protection, which alerts the user when they’ve gone over their preferred speed, warning them to slow down. I chose to disable OSP since I felt capable of managing my own speeds without nagging from my radar detector.

For most of my time with the Max, I used Auto mode, though lately I switched to Auto No X as my preferred setting. Before I explain my reasoning, I’ll mention what each mode does.

In my experience, Auto did a great job even on the freeway, so I never felt the need to switch to Highway mode. However, in my entire year of driving, I never found a single credible threat on X band, but it’s the signal that most frequently occurs. Due to that, I felt comfortable turning off X band detection and giving my ears a rest.

Speaking of which, the default sounds on the radar detector are very annoying and jarring. In Escort’s defense, they certainly get your attention, which is what they’re designed to do. After a while though, the alerts begin to grate your nerves. Luckily the Max begins to drop in volume after the initial detection so that it doesn’t constantly annoy the driver with the same signal.

Also, the PASSPORT Max used to have a terribly annoying and loud beep that would occur every time it booted up. Luckily a firmware update has improved upon that issue by making the beep much quieter.

The PASSPORT Max also has a Mild alert tone option where the obnoxious Standard tones are replaced by chimes. This mode is far less grating on the nerves, though people who listen to loud music in their car may want to consider staying on Standard mode to make sure they actually notice the alerts, annoying as they may be.

The PASSPORT Max has a 3.5mm audio jack on the side for audio out so that it can be plugged directly into the stereo system (or headphones I suppose). While a nice thought, it seems somewhat pointless since most car stereos play sound from only one source at a time. This means that if you’re listening to the radio or music played from a phone via Bluetooth, you won’t hear your PASSPORT Max going off at all, since the radio would have to be set to AUX. Maybe the workaround would be to plug a phone and the PASSPORT into an audio splitter that is plugged into the AUX port, but I’d expect some audio degradation with that setup.

In terms of detection, the PASSPORT Max worked very well, Ka band signals were always picked up and always signified a police car nearby. Laser detection was good as well, though due to the short detection range of Laser signals, the warning time was fairly short. K band signals also had great detection, though didn’t always specify a policeman or speed trap.

It does do a very good job ignoring false positives. The PASSPORT Max marks and grays out false positive signals so that the user won’t be alerted on subsequent detections. The user can also manually mark a location’s signal as a false positive.

Using GPS and Escort’s database, the PASSPORT also had great detection for red light cameras and speed traps, and it alerted me to how far away they were from me.

One thing I do wish the PASSPORT Max had is the ability to change settings and choose options on a computer. The PASSPORT Max can be plugged into a PC via miniUSB in order to upgrade the firmware or update the database of speed traps and red light cameras, however, that’s all the software is used for. The PASSPORT Max also can’t boot without being plugged in through it’s primary power port, meaning it can’t be booted up while plugged in via miniUSB, it can only be turned on in a car. I would like the ability to set up the device through a GUI on my computer, or barring that, at least be able to change settings from the comfort of my room rather than be forced to change them in the car while it’s on.

Since it was provided to me for the purpose of the review, I figure I should talk about the SmartCord Live and Escort Live service a bit. I used the SmartCord Live throughout my usage of the PASSPORT Max since I really liked having the extra USB port. However, when it came to using Escort Live and the Escort Android app, while they functioned very well, I very rarely felt the need to utilize them.

The Escort Live service operates much like Waze; a user and their PASSPORT Max detect or see a threat, report it, and it gets uploaded to the Live service. In doing so, it makes it so that other drivers using the Live service don’t need to worry about their radar detector detecting the threat because their phone already knows about it.

Most of the time, I felt it was more of a hassle to start up the app and begin usage than it was worth, especially since the PASSPORT Max already did a great job detecting threats. When going on longer journeys, it became more practical to use since the time it took to set up versus the time spend driving was minimized. I’d say that for people who plan on driving a lot of long distances, the Escort Live service is worth it, but for daily commuters or people who only take an occasional drive longer than 30 minutes, it’s probably not worth it.

The Escort Inc PASSPORT Max retails for $550. While it is certainly on the high end for a radar detector, it seems to be worth it considering how well it detects threats and also ignores false positives. While I wish I could modify a few more things about the interface, and have a better way to do so, I’m still very happy with my PASSPORT Max and it has saved me on numerous occasions over the past year. If you’re in the market for a new detector and you’re looking for the best, you can’t go wrong with it.