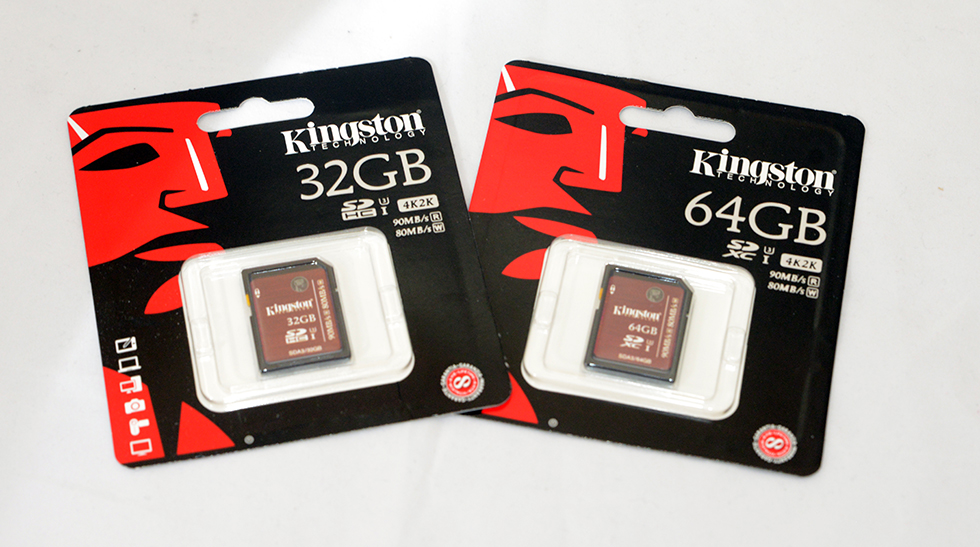 Recently, Kingston launched a new line of  ‘4K’ SDXC memory cards and they sent us their 32 GB and 64 GB variants for testing. Over the course of the past few months, we’ve put these memory cards through our paces, shooting thousands of images through each memory card, making sure that they were put to the test. In our testing, we will check the memory cards’ speeds relative to the competition as well as how they perform inside our D800. In addition to that, we will likely try to adjust our real world test to be used with something like an a6000 in the future because it is capable of 11 FPS compared to the 4 FPS of our D800.

Since memory card tests are simple, we’ll keep things simple. We’re looking to see if Kingston’s 4K memory cards are going to be comparable to using something like a CF card since their speeds are theoretically reaching CF card speeds. Also, remember that SD cards are fundamentally going to be slower because of the DRM built into the SD standard, something that the CF cards do not have. Also, one must remember that SDXC cards are not backwards compatible with SDHC devices, meaning that in order to get these faster UHS speeds you must have an SDXC capable device. Sure, SDXC, SDHC and SD cards will work fine in an SDXC device but the SDXC cards simply require hardware support, so keep this in mind when buying any SD cards for your camera, tablet or whatever else might use an SD card.

The back of the packaging of the Kingston SDXC 4K cards

As you can see, the back of the packaging is pretty simple much like the front but tells you how to and how not to use these cards. They are qualified for all of the standards, and if you noticed on the front of the packaging, these cards are warrantied for life, unlike a lot of their competitors that might only slap a 1 or 2 year warranty. For this alone, you can believe that Kingston’s cards are going to have some serious longevity and reliability. After all, nobody wants an SD card to suddenly go bad on them and corrupt itself and lose tons of images.

So far, I’ve been using both cards pretty heavily since I got them around March and they’ve continually performed quite well through my USB 3.0 card reader and we’ve got some performance benchmarks for you to see exactly how fast. 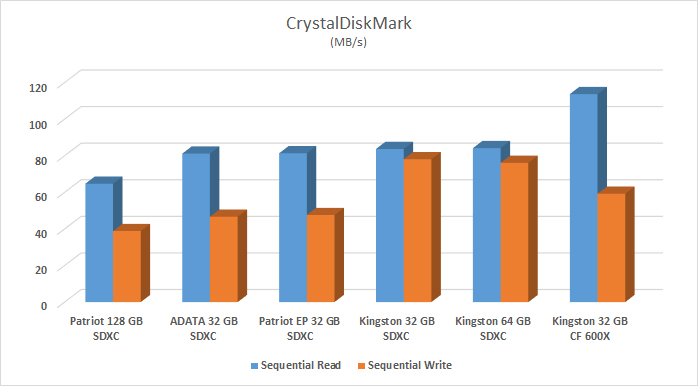 First, we tested CrystalDiskMark to get an idea of what kind of performance you could see from these memory cards in a best case scenario. Here, we saw the cards performing very close to each other, but they didn’t quite reach 90 MB/s that was rated on the front of the cards and packaging themselves. However, they were still faster than all of the SDXC cards that we tested from ADATA and Patriot. The 32 GB card had a sequential read of 83.72 MB/s and a write of 78.11 MB/s while the 64 GB card had a slightly better read speed of 84.19 MB/s and a slightly worse write of 76.14 MB/s. All of these speeds were taken as an average of three tests, which themselves are an average of 5 tests in CrystalDiskMark. The Kingston 32 GB CF 600X card blew away the competition in terms of read speeds with a 113.7 MB/s read speed but a much worse 59.24 MB/s write speed, indicating that the 4K cards actually have better write performance than the CF card does.

After these findings, we were excited to see how the 4K SDXC cards from Kingston would perform in our D800. The D800 supports both CF and SDXC which makes using these cards in it a perfect test platform to compare CF against SDXC. For our testing, we simply took each card, properly formatted it, and then held down the shutter button for 30 seconds and counted the amount of photos that were written to the card. We did this both in RAW+JPEG as well as RAW only, depending on your style of shooting. Since this is a professional camera we did not bother with JPEG only. 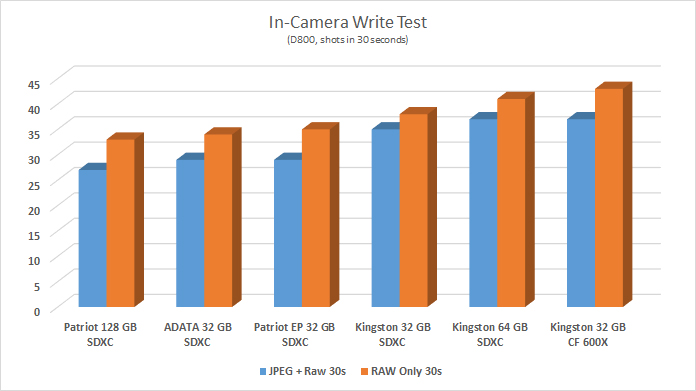 Here we saw a slightly wider gap between the different speeds of the cards. The Patriot 128 GB card performed at 27 shots per 30s while the ADATA 32 GB card shot 29, as did the Patriot EP 32 GB. The Kingston 32 GB 4K SDXC card managed 35 shots in 30 seconds and the 64 GB 4K card 37. However, the CF card bested both of these cards with a 20% or so improvement of 43 shots per 30 seconds, which means that either the SD pipeline on the D800 is fundamentally slower or that the memory cards are having a hard time coping with the JPEG + RAW write load. This question gets answered when you look at the RAW only performance.

With RAW only, the performance between all of the cards goes up except with the Kingston 32 GB CF card. The removal of the JPEG write obviously makes a difference on these SD cards very likely because of the SD DRM combined with the processing necessary for the camera to process JPEGs. The slower cards saw the best performance improvements, significantly reducing the performance gap between cards. The Patriot 128 GB SDXC card improved to 33 shots per 30 seconds while the ADATA 32 GB SDXC card got 34 and the Patriot EP 32 GB got 35. The Kingston 32 GB 4K SDXC card managed a speed of 38 shots in 30 seconds while the 64 GB card got 41 shots in 30 seconds. But once again, the CF card overall performed the best with 43 shots per second, indicating that the JPEG compression doesn’t appear to affect the performance of the CF card like it does the SD cards. 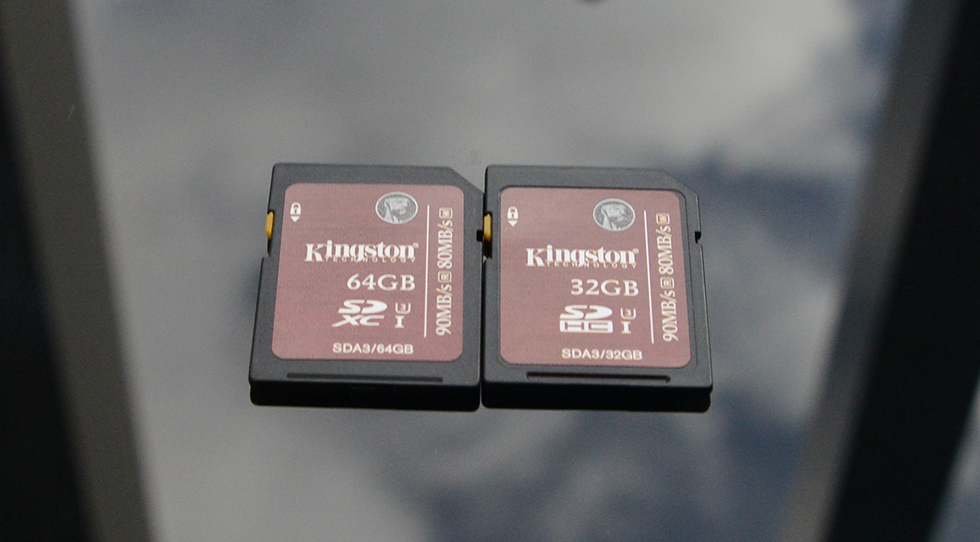 Unfortunately for our review, we weren’t able to test these cards capability of actually recording 4K video, but there are very few cameras that can actually record 4K to an SD card, and almost all of them require an SDXC card like the Sony FDR-AX100 4K video camera and Panasonic GH4. However, both of these cameras record at 100 Mbps, which means that these cards’ write speeds are more than ample enough to handle 4K recording from these cameras. Plus, their higher read speeds will mean that you’ll get your 4K footage off these cameras much more quickly as well.

The cards themselves are pretty reasonably priced for their performance and warranty, with the 64 GB version selling for $100 on Amazon and the 32 GB version selling for $53, so you’re not really saving any money by going for the bigger card if you don’t need the capacity. However, I personally prefer larger SD cards so that I don’t have to worry about running out or swapping. These cards are good enough that they’ve forced me to swap out my favored 128 GB Patriot SDXC card in favor of the 64 and 32 GB 4K SDXC cards from Kingston purely because of how quickly I can transfer the images. However, these cards slightly underperformed in our expectations for their read and write speeds, most likely because Kingston’s figures were tested using ATTO which is usually ‘best case’ scenario for any sort of storage medium.

Either way, these cards are going to be great for any photography or video you might shoot with them and you don’t have to have a 4K camera in order to use them. There are plenty of uses for such high performance cards and at a fairly reasonable price. SanDisk has a similarly priced card that quotes a 95 MB/s rating instead of Kingston’s 90 MB/s but the reality is that their card will likely perform about the same, even though it is a few dollars cheaper and doesn’t have a lifetime warranty. We will try our best to get one of their cards in our hands shortly, but until then, the Kingston 4K SDXC cards are the new kings of the SDXC hill.