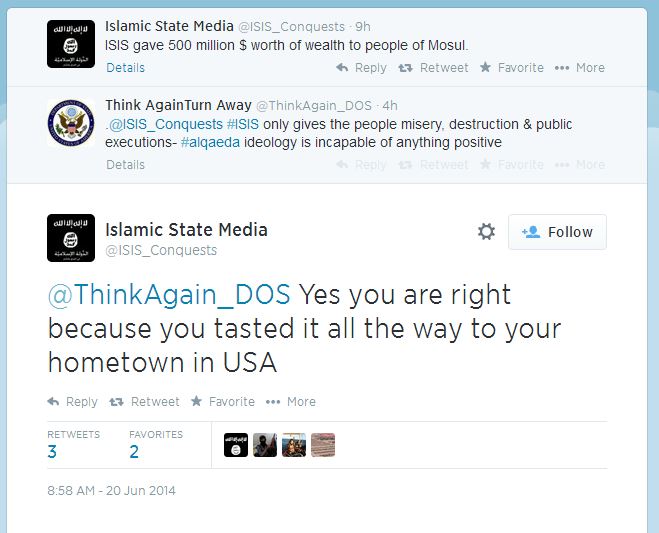 As the war in Iraq rages on with an upsurge of ISIS (Islamic State in Iraq and Syria) violence in the northern parts of the country, a battle also rages on in the web, especially on Twitter. Originally started by a tweet from what appears to be an unofficial ISIS Twitter account which stated that ISIS brought $500 million worth of wealth to the people of Mosul. This is in reference to the fact that they managed to break into Mosul’s central bank and steal 500 billion Iraqi Dinars which comes out to about $425 million, making them possibly the wealthiest terrorist group the world, overnight.

Well, the Department of State maintains a Twitter account that goes by the name Think Again Turn Away, trying to make people aware of the ills of terrorism and to convince people to walk away from terrorism and not cause people harm. The account states that it talks about “some truths about terrorism” and looking at their feed and responses, they clearly are more on the offensive on Twitter. Then, the following tweet came from the ISIS account.

ISIS gave 500 million $ worth of wealth to people of Mosul.

This was followed by the Department of State account

This once again shows how even Twitter can be used as a battlefield between governments or in this case governments and terrorist organizations. Right now, the situation in Iraq isn’t a pretty one and we’re hoping for the best for the people of Iraq, regardless of these Twitter wars that are designed to change the perception of the public through tweets.