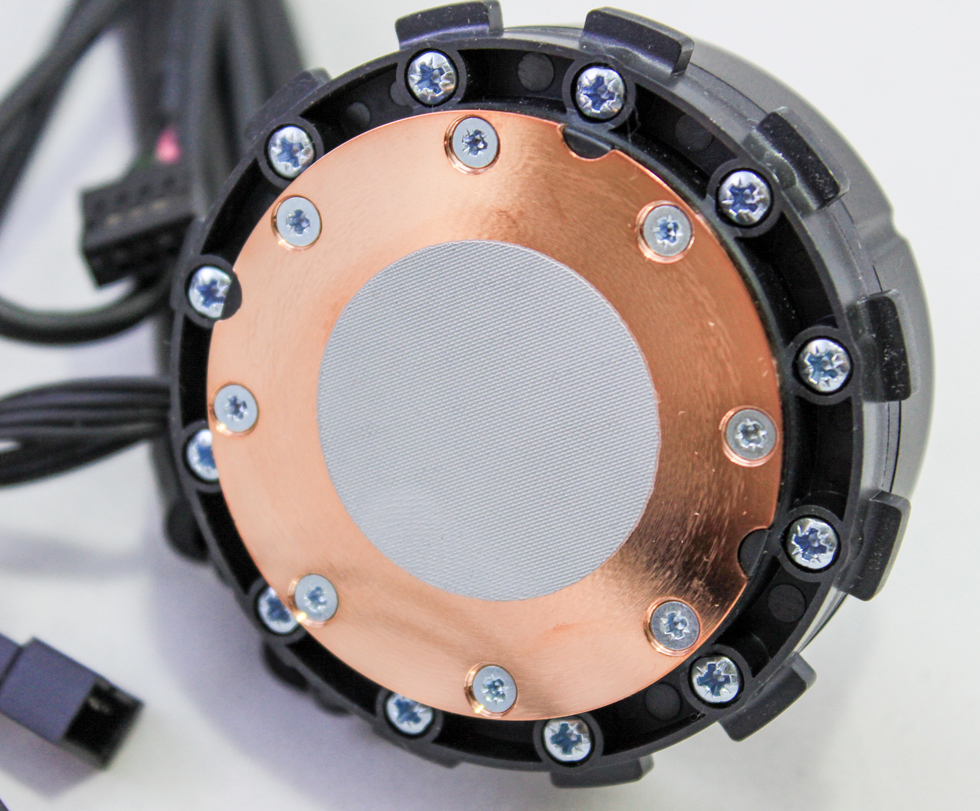 Enthusiasts are on a never ending quest to find better cooling for their CPUs.  Air cooling is the norm these days, but affordable water cooling systems are becoming more affordable.  Water cooling is the next step and can provide great cooling effectiveness.  There are two ways to install a water cooling system into a computer. They are piecing together a system from individual parts, or a “closed-loop” system.  Closed loop water cooler contains the block, pump, and radiator in a sealed loop (that usually require no maintenance).  Many companies are now coming out with their own closed loop systems for enthusiasts.

Today we will look at Thermaltake’s Water 3.0 Extreme closed loop cooler and see how it preforms.  The cooler is Thermaltake’s top end closed loop system, and has a 240mm radiator.  The pump for the system is built into the water block, which can mount to multiple AMD and Intel sockets.

After seeing the pictures you will probably be thinking “I have seen this kit before”, indeed you have if you have looked into AIO water cooling kits.  Asetek is the ODM for this and many other kits and some would argue that the company has a monopoly on the AIO water cooling hardware industry.  Recently, Asetek has caused a stir in being granted another liquid cooling patent by the USPTO which may ultimately hurt consumers. Unfortunately for consumers, Asetek’s aggressive patenting and litigation hurts consumers’ ability to have choice as most kits are now Asetek based.

The kit has many variations through the various companies who sell variants of it, usually with their own fans, features, and packaging.  Many will be buying the kit for those options weighted heavily on price.  With this kit just under the $100 mark it is a definite contender for your case 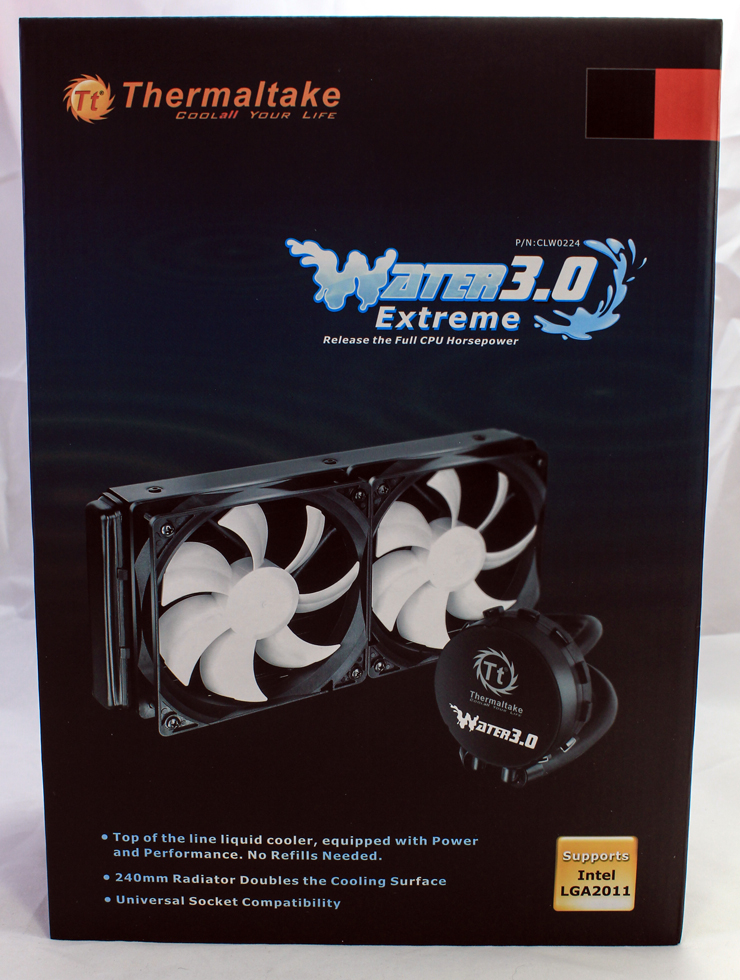 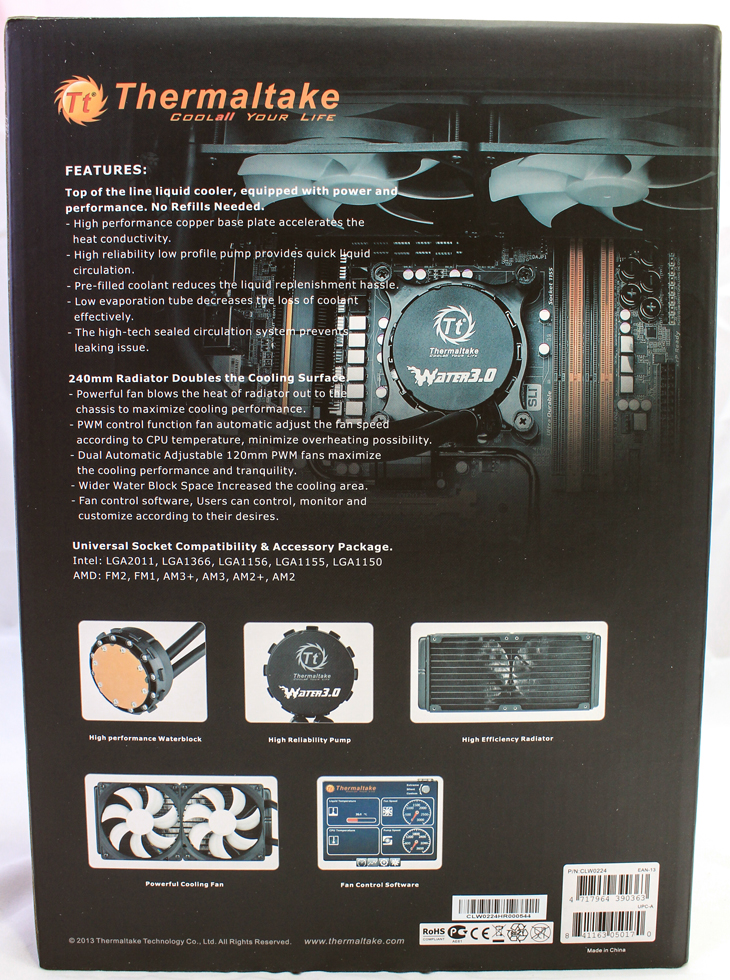 Everything was well packaged and secured within the box 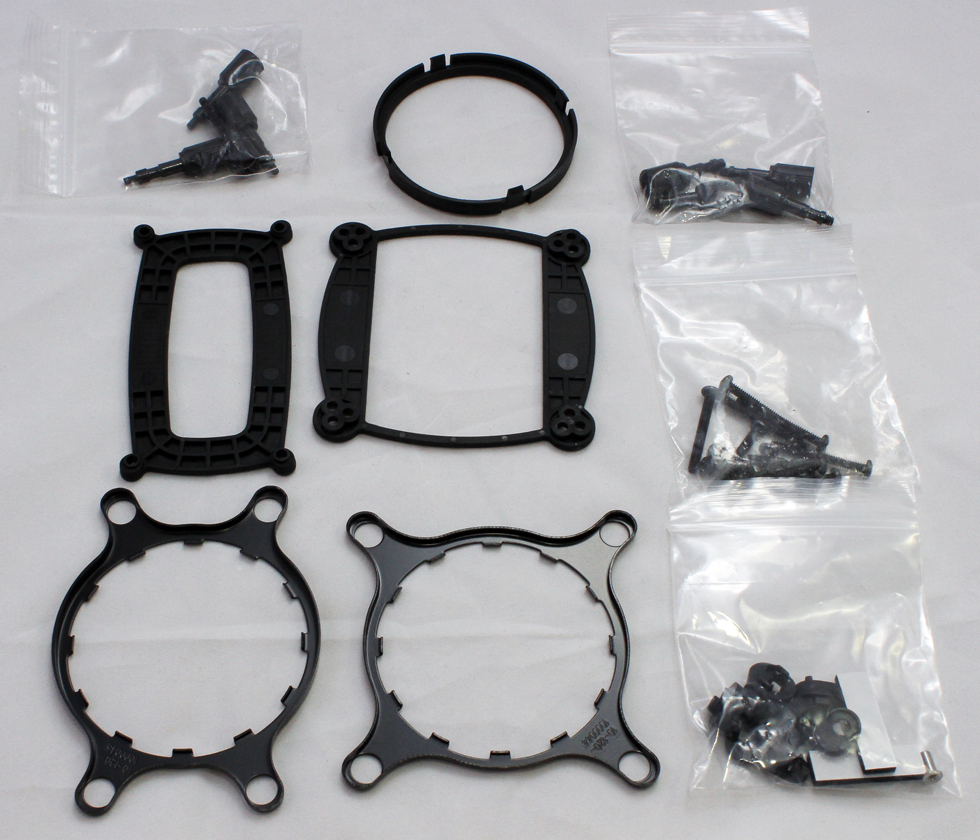 Mount kits for multiple sockets of Intel and AMD are included; once again it was well packaged and organized 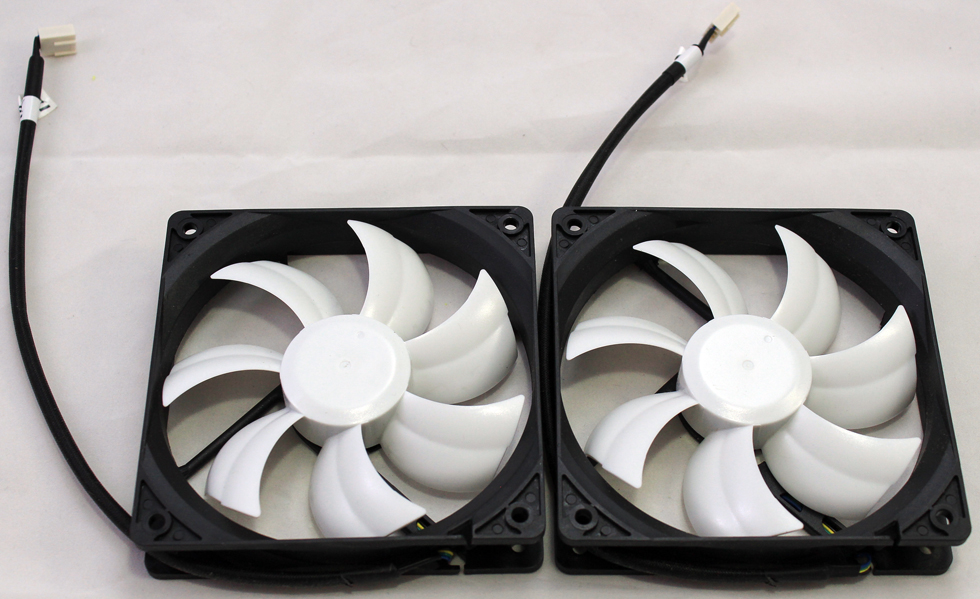 2 PWM Fans are included with the kit. I am told that these were specifically chosen for the kit and that replacing the fans with higher speed models won’t make a big difference.

The instructions that came with the system are very easy to read and understand I do suggest that you get the latest fan control app from the Thermaltake global website, so you can be up to date. 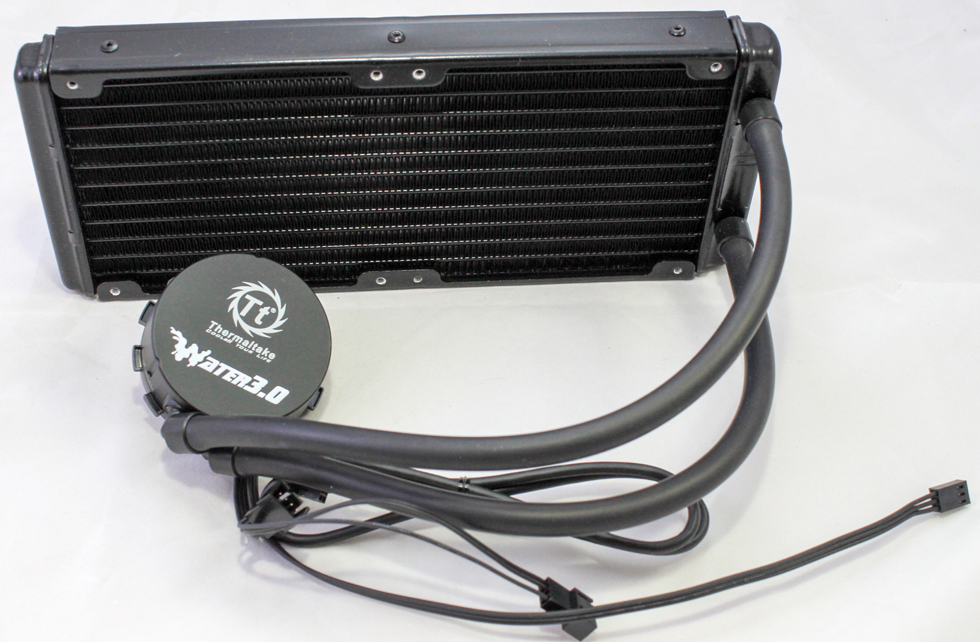 Everything was intact with no blemishes on the system.  There is a USB cable that attaches to a USB2.0 internal header, if you want to use the fan control app with it.

The base is clean with a very flat surface, though not a mirror surface as it still had some machining visible.  Pre-applied TIM is provided on the base, though many (like me) will clean it off and use some fresh product of choice.

Installation is very straightforward and easy to do; the instructions are clear and nicely drawn out.  The Intel mount which I used was easily installed within a couple of minutes.  The 120mm fans plug into the CPU block/pump combo, which itself plugs into an internal USB 2.0 header as well as CPU fan pin-out on the motherboard.  It can then be automatically controlled via the desktop application via the USB. I suggest that if you want to use the included app to regulate your fans, set CPU fan to 100% in bios (or a curve forcing that) with fan failure alarm set. 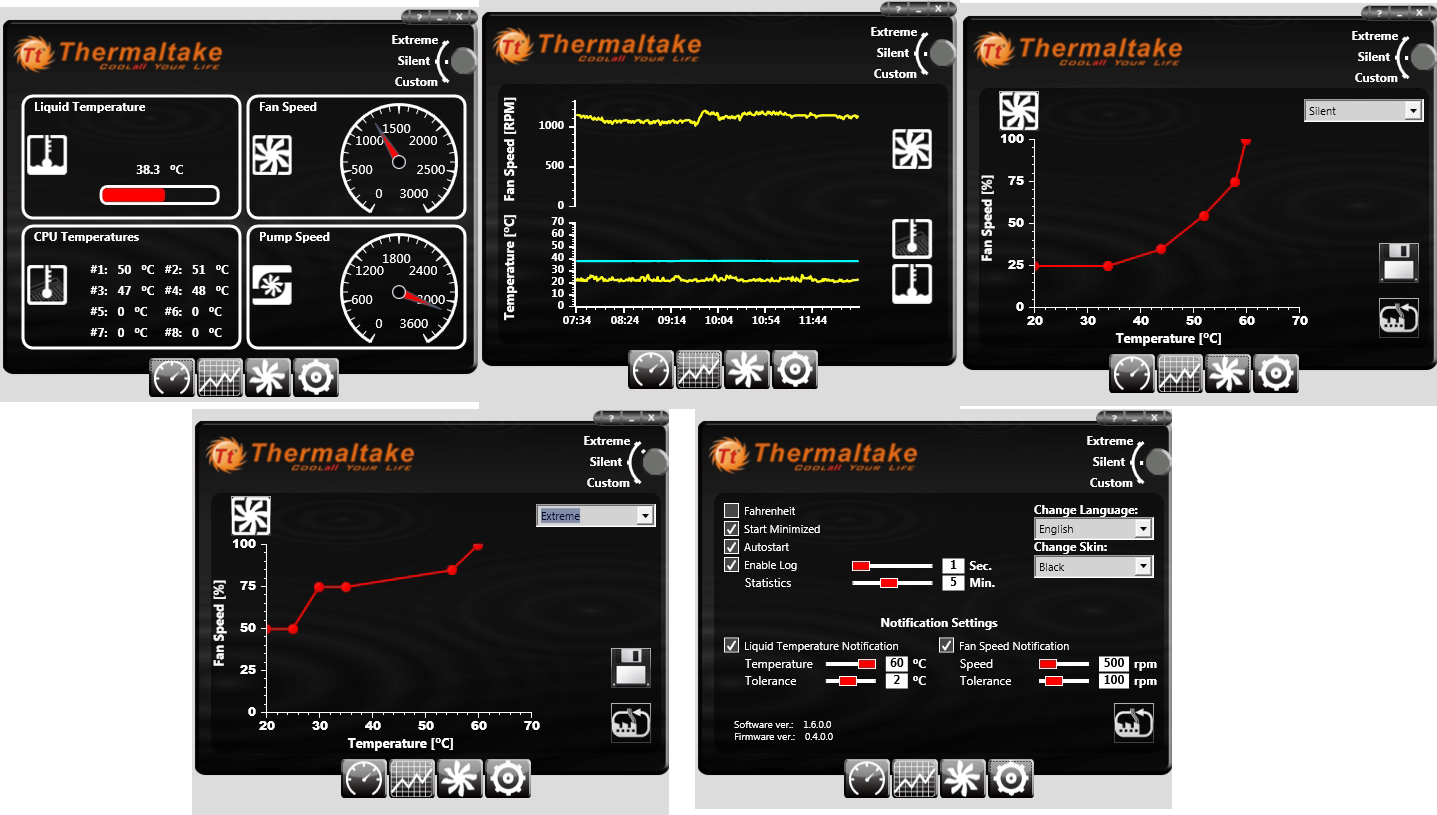 The application for the water cooling system is very easy to use and allows you to run different profiles.  Silent, Extreme, and Custom which is best for running your own fan profile.  I learned that modifying the Silent or Extreme profiles didn’t seem to work as well as setting up custom profile.  Swapping from one profile to another doesn’t have a fast response and sometimes requires fiddling with multiple times to get it to switch. There are Notification options for the coolant temperature and Fan speed, which are good safety measures.  The main thing you get from the app over just plugging fans into headers on the motherboard are viewing coolant temperature, notifications, and fan profiles based on  CPU temps (if you have the pump plugged into the CPU header).

I stress tested my Intel Core i7 4790K Devil’s Canyon ES at 4.7GHz using OCCT against the Cooler Master TPC-812 (their highest end air cooler) and then again with this Water 3.0 Extreme.  I let it run for about 8 hours and over the times when I checked it I was getting readings that were about an average  8C cooler overall.  The sound level at full speed is very reasonable, and thankfully not too distracting.

Overall I would recommend this kit based on its ease of installation, performance, and cost.  I think that the price point is good for a dual 120mm Asetek ODM all-in-one cooler as other of the same type can go for up to $30 more.  The performance is definitely there, holding the 4790K ES solidly @ 4.7GHz while being stressed 100 %.  The only real issue that I saw with this kit was the control app can be a bit buggy, although works well aside from that.