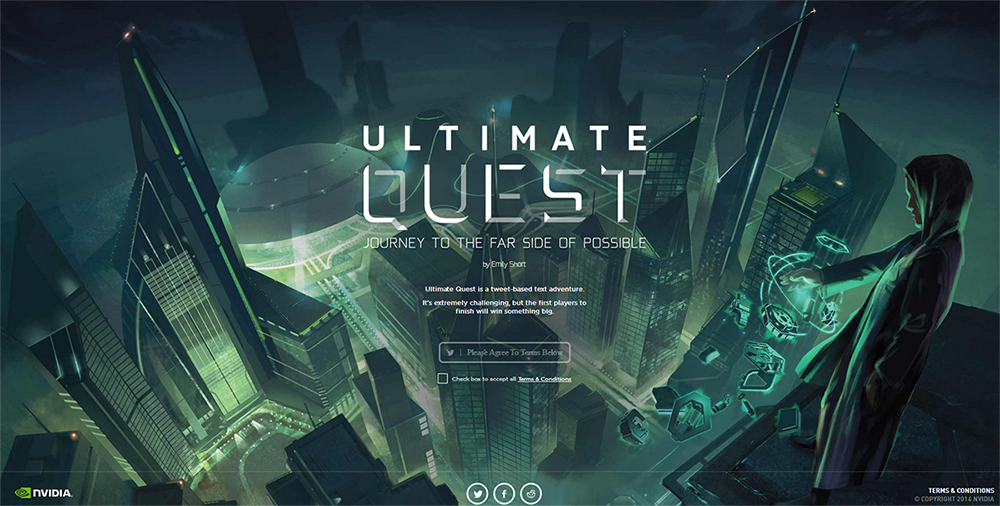 Nvidia sent us a link to a contest that they’re running which is a series of puzzles that will eventually lead you to a ‘new release’. By the looks of it, Nvidia is doing some sort of launch next week, July 22nd. This actually lines up with a recently rumored release of an Nvidia Tegra K1 tablet, which is supposed to launch on the 29th according to Videocardz, but originally stated the 22nd (they changed the date since we last saw the rumor). It is rumored to have a full HD display, which is still quite desirable for mobile gaming and a separate game pad to accommodate gamers that still like the thumb sticks and dpad from the original SHIELD.

This contest is called the Ultimate Quest and there are five phases to the quest, with each one being available each day, leading up to the 5th on the 22nd of July which will reveal the ‘new release’. Obviously this is gaming related and there’s very likely something related to Tegra gaming, much like the SHIELD Tablet that is supposedly being rumored towards the end of the month.

In order to participate, you must use Twitter (which Nvidia will obviously be able to gain quite a bit of data from) and you must use Twitter to textually answer each puzzle along the way. The Ultimate Quest is supposed to be some creative endeavor between Nvidia and Emily Short, a well known writer. In fact, she’s already left some hints on her own blog and there are some hits on the first page of the puzzle if you have already signed in via Twitter and checked on the first module of the story.

Hopefully we’ll see a Tegra K1 device, maybe it will be the rumored SHIELD Tablet, and maybe it won’t be. But ultimately, nobody will complain if it is because Tegra K1 looks like a very promising chip and hopefully this Ultimate Quest will keep some gamers occupied over the weekend.