What makes this mouse unique is that it has what Logitech calls Darkfield Laser Tracking. This feature enables it to track on glass. How often someone mouses on their windshield is uncertain, however.
The mouse is advertised to work anywhere, on anything, and with anything. Anywhere MX works with old and new systems from Windows XP through Vista – if anyone is still using this failed operating system – to Windows 7, 8 and RT. Mac compatibility wasn’t overlooked in the design either. The Unifying receiver connects up to 6 compatible devices.

Logitech offers several wireless Unifying mouse choices from $29.99 to the top Performance MX at $99.99. They have eight Unifying keyboards in various configurations including solar powered, touch, and illuminated. 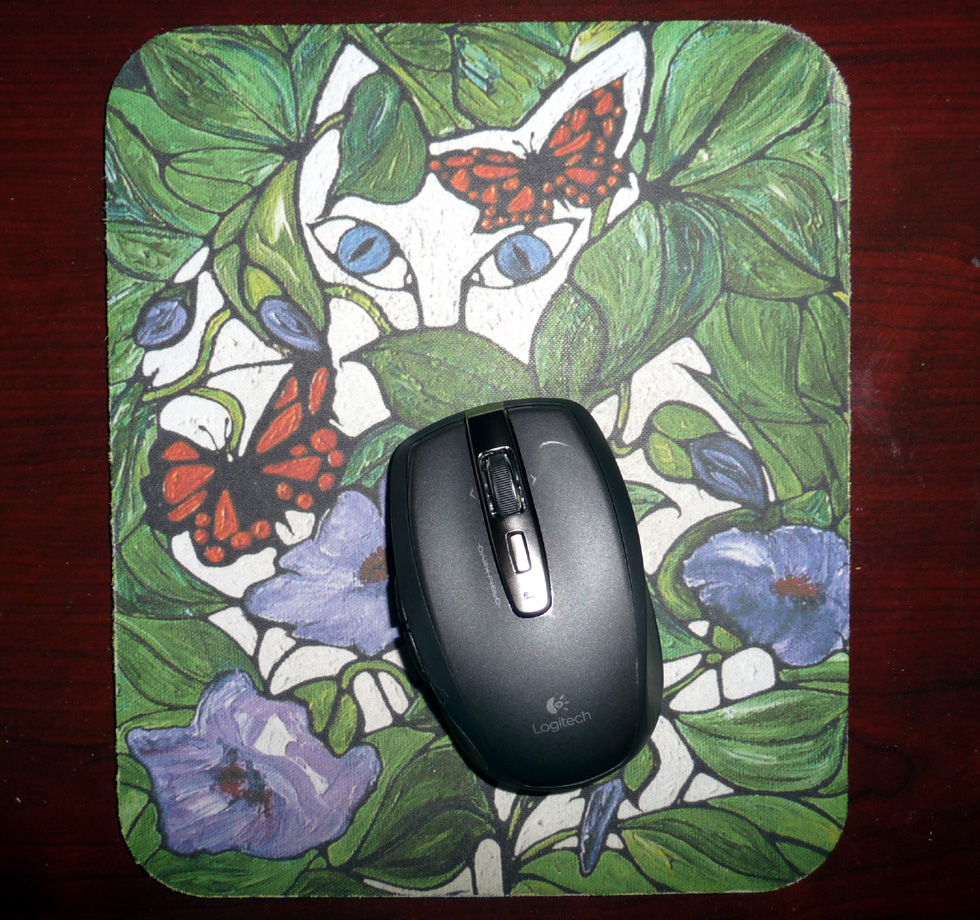 The mouse glides across my cat-n-mouse pad and the scroll wheel moves like silk rolling the image quickly and smoothly. Here, the documentation is helpful. The wheel works as a toggle, pressing it down changes the scrolling from a smooth rolling action to a slower, jerky page up/down movement. If you have good coordination, you can press the wheel left or right within the web page to scroll the screen in those directions. It is not necessary to position the cursor on the horizontal scroll bar to do so.

The left click button is solid and effective for selecting items from a list and positioning the cursor within a document. Right click immediately displays the appropriate menu listing. Navigating forward and back between web pages is controlled by buttons beneath your thumb if you run the mouse right handed. The buttons are slightly stiff, but you can apply appropriate pressure without interference from buttons on the opposite side of the mouse since there are none. 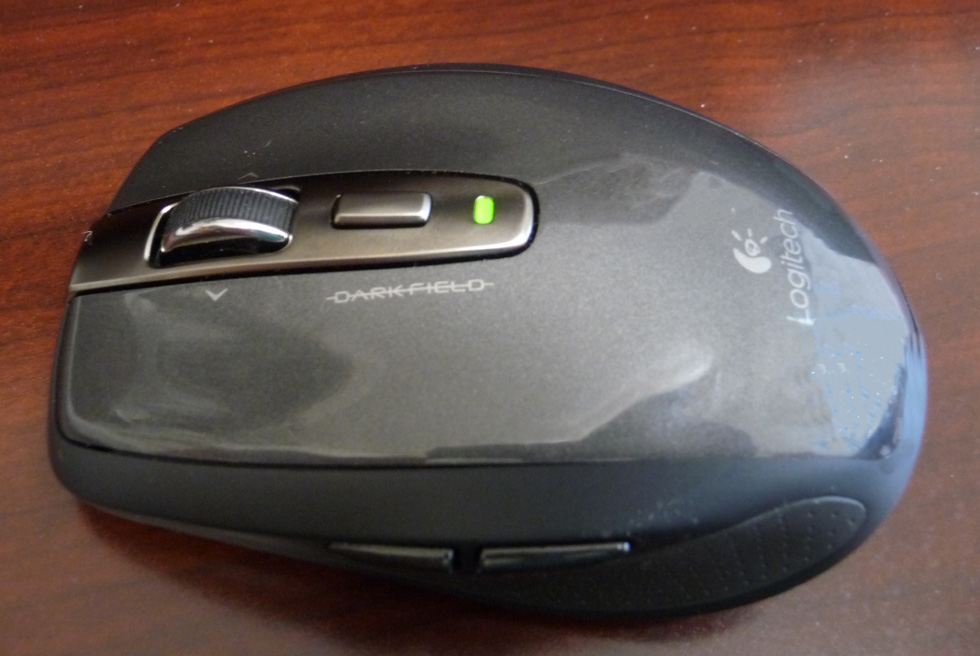 Symbols beside the scroll wheel and on the side buttons indicate directional movement.

A little green light on top of the mouse comes on when you set the Darkfield slider at the bottom of the mouse to On. There is also a button above the Darkfield label which led me to think they functioned in tandem. However, the identifier in the documentation indicates the Middle button’s function varies by application.

The back-to-back, single page of documentation provides mostly graphic images rather than text. For example, Item 1 points to what are described as left and right buttons. Item 7 indicates back and forward buttons. It obviously is assumed the user has mouse experience and knows what these left/right, back/forward buttons do. Yes, there are still people out there who are computer novices and could use a little more guidance. I suppose it could be argued that they shouldn’t buy a computer until they’ve attended a few classes, but who does?

The Anywhere MX package includes two AA batteries, however documentation which is written in four languages – English, French, Spanish and Portuguese – claims it runs on either one or two batteries. 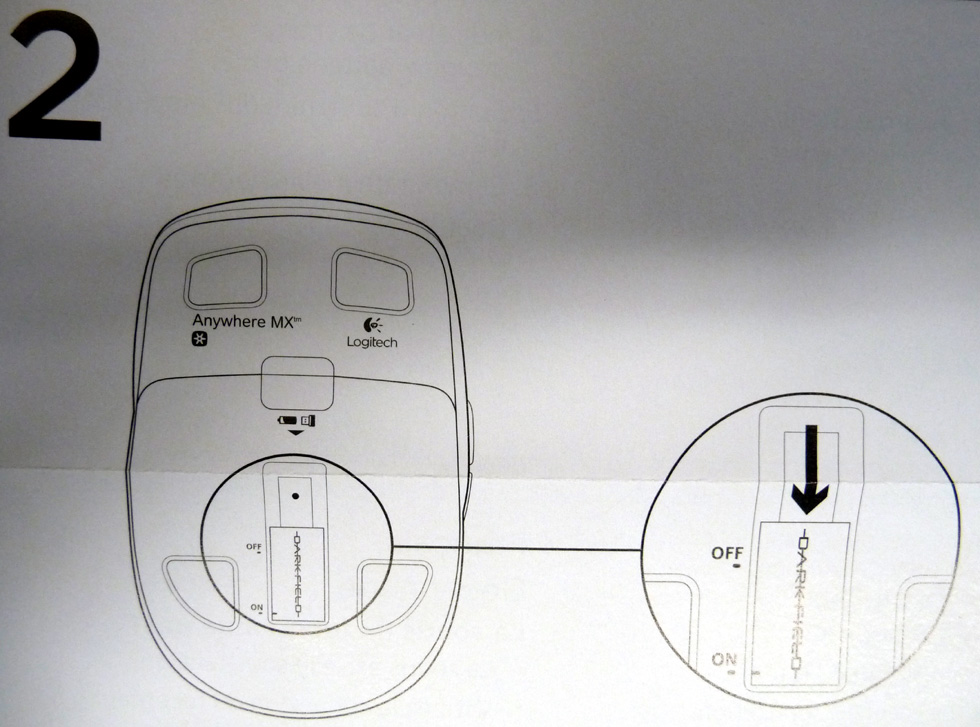 Get the picture? Can’t get more concise than this.

Step 2 of the documentation has a great graphic that indicates you can slide the Darkfield button On or Off, but oddly, it doesn’t explain what the Darkfield function is. Don’t throw the box away. That’s where you’ll find the explanation which as I mentioned earlier says you can use the mouse on glass.

The graphic in Step 3 indicates where the USB is inserted into a laptop and contains the most information of any step. It tips Mac OS X users that if the Keyboard Setup Assistant appears they need to close the window.
Step 4 directs you to the Logitech website to download the most recent software and review other configurations and features. Finally they ask you to go to the “ithink” website to tell them, well, what you think.

If the mouse is not working, a very brief Troubleshooting paragraph asks: Is the mouse turned on? Yes, the fundamental first “duh” question asked by every support department. Maybe the problem is related to the USB port, maybe the battery is in upside down or the mouse is too near a metallic object. Other than those tips, you must go to their support website for help. Phone numbers for the US, Argentina, Brazil, Canada, Chile, Latin America and Mexico are listed. We can only assume they are direct lines to the support department and not the corporate president.

I’ve always been happy with mice from Logitech, but the assumptions evident in the documentation only makes one wonder what other assumptions might have gone into its design and operation. We all know what ASS-U-ME stands for.

The Important Information, read CYA, insert is more comprehensive and in smaller print than the quick start instruction page. It warns of potential carpal tunnel damage from repetitive mousing, although it doesn’t mention the disability by name. Keep the mouse away from water and heat. Now isn’t this one piece of information they could assume the user would already be aware of?
Radiation is mentioned as a concern – BTW, did they ever decide if cell phones caused brain cancer or not? Misuse of or using the wrong batteries can be harmful to you and/or the device. You are warned to keep the batteries [and fireworks] out of the reach of children. Just how dumbed down has the general public become?

Oh, did I mention they warned of possible interference with your TV or radio? A couple paragraphs regarding compliance with FCC and International Standards for laser products rounds out the Important Information insert.

This mouse comes with a 3 year limited hardware warranty. That could be a good thing because several user comments around the web since 2009 indicated they needed to replace the Anywhere mouse or fix its left click button. The mouse received 3.5 out of 5 stars and 70 percent said they’d recommend the device. I haven’t had their latest version long enough to vouch for the viability of the model I received, but so far so good.