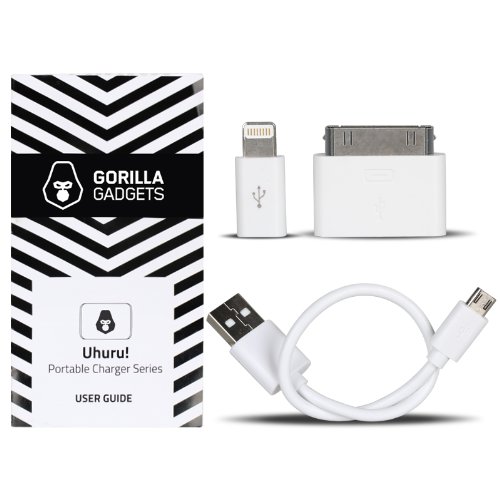 We caught wind of a pretty sweet backup battery deal on woot.com, a daily deal website now owned by Amazon. This is for the Gorilla Gadgets CHR-150 Uhuru! 16,800 mAh External Portable Battery Pack Charger with LED Screen. Why is this a great deal? Because Amazon is selling it right now for $70, but Woot.com is selling it for $40 and the suggested retail price is $140. But what makes this thing awesome? Well, other than the fact that it comes with three different charging connectors (microUSB, lightning and Apple 30-pin), it can also fully charge an iPad and an iPhone and probably still have some charge left (depending on whether the devices are on).

While Gorilla Gadgets may not necessarily have a very well recognized name, the online reviews appear to indicate that they make a pretty solid product. And while we haven’t reviewed one of these yet, we’ve reviewed similar products before from a multitude of other companies. These guys appear to make a pretty solid product and at $40 its really hard to beat that big of a battery. Unfortunately, even though it does have two USB ports, only one port is a 2A fast-charger port while the other is a 1A trickle-charger port. It would be nice if they had a 2.5A charger like some of the ones we’ve seen from Patriot, but at $40 its really hard to complain. With a 16,800 mAh battery you could theoretically charge something like 10 iPhones before you run out of juice.

So, with that in mind, we recommend you head on over to Woot.com and check out this charger because its a pretty good one and you’re not going to find a battery pack anywhere near that big for that price. And if you do, you probably should worry about whether or not its going to explode in your hand because that’s ridiculously cheap. Don’t forget, once Woot is out, they’re out and you probably won’t see this price ever again so make sure you buy one if you really need one.