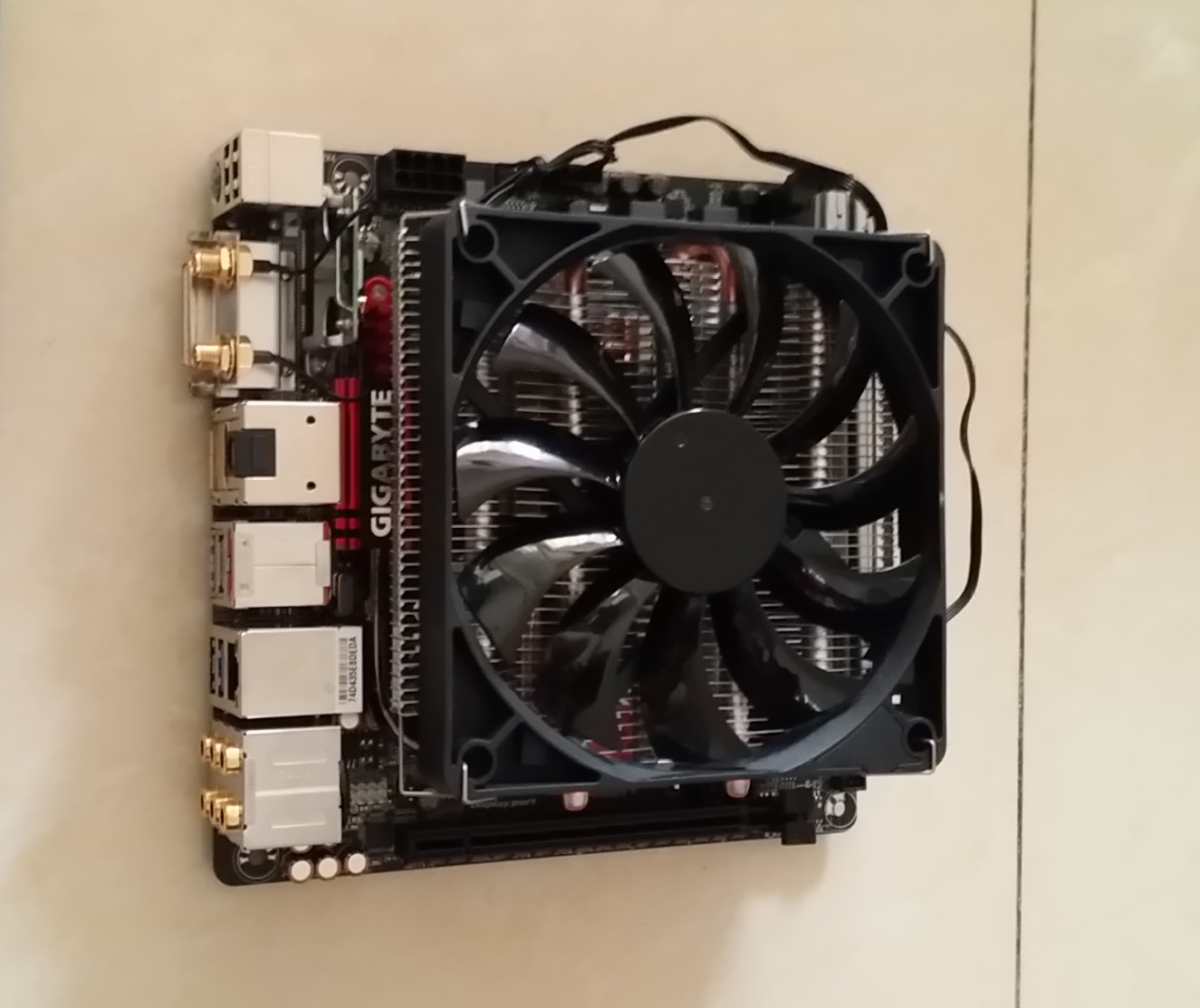 Ever thought of an ultra-small, yet fully overclockable, high speed desktop PC squeezed inside the compact Mini-ITX platform? A combination of Intel’s Core i7-4790X and Gigabyte GA-Z97N board could give you that, just watch the Mini-ITX size and power limits.

First, with its jacked up CPU and GPU core speeds, the “Devil’s Canyon” 4 GHz four-core Haswell does have enough muscle to drive a home-theatre UHD 3840×2160 TV platform, in everything minus the 3D games. The latter point would, of course, have to wait for some substantial GPU architecture refresh within Intel, something not likely until Skylake platform a year and half from now.

A UHD home theatre PC with OC capability may not be the first thing that comes to one’s mind when matching the desired features, however Taiwan vendors did create the solution anyway. One of the best such boards available is the GA-Z97N Gaming from Gigabyte, which was  matched for testingwith the i7-4790X. The other key components used were a pair of Kingston 4 GB HyperX DDR3-2400 DIMMs, and GELID SlimHero 4-heat pipe heat sink fan unit. As you will see, the Kingstons did manage to even improve on the default latency while cutting 3% of the default voltage required, while GELID SlimHero nicely covers both the VRM and DIMM parts for a bit of extra airflow to avoid need for a separate system fan altogether.

Back to the motherboard: knowing that overclocking the 4 GHz Haswell to somewhere around 4.5 GHz before Turbo, plus running the memory at highspeed, and still providing for an optional PCIe v3 GPU, was already a tall order for even a mATX mobo, I was pleasantly surprised that Gigabyte managed to squeeze far more into it. 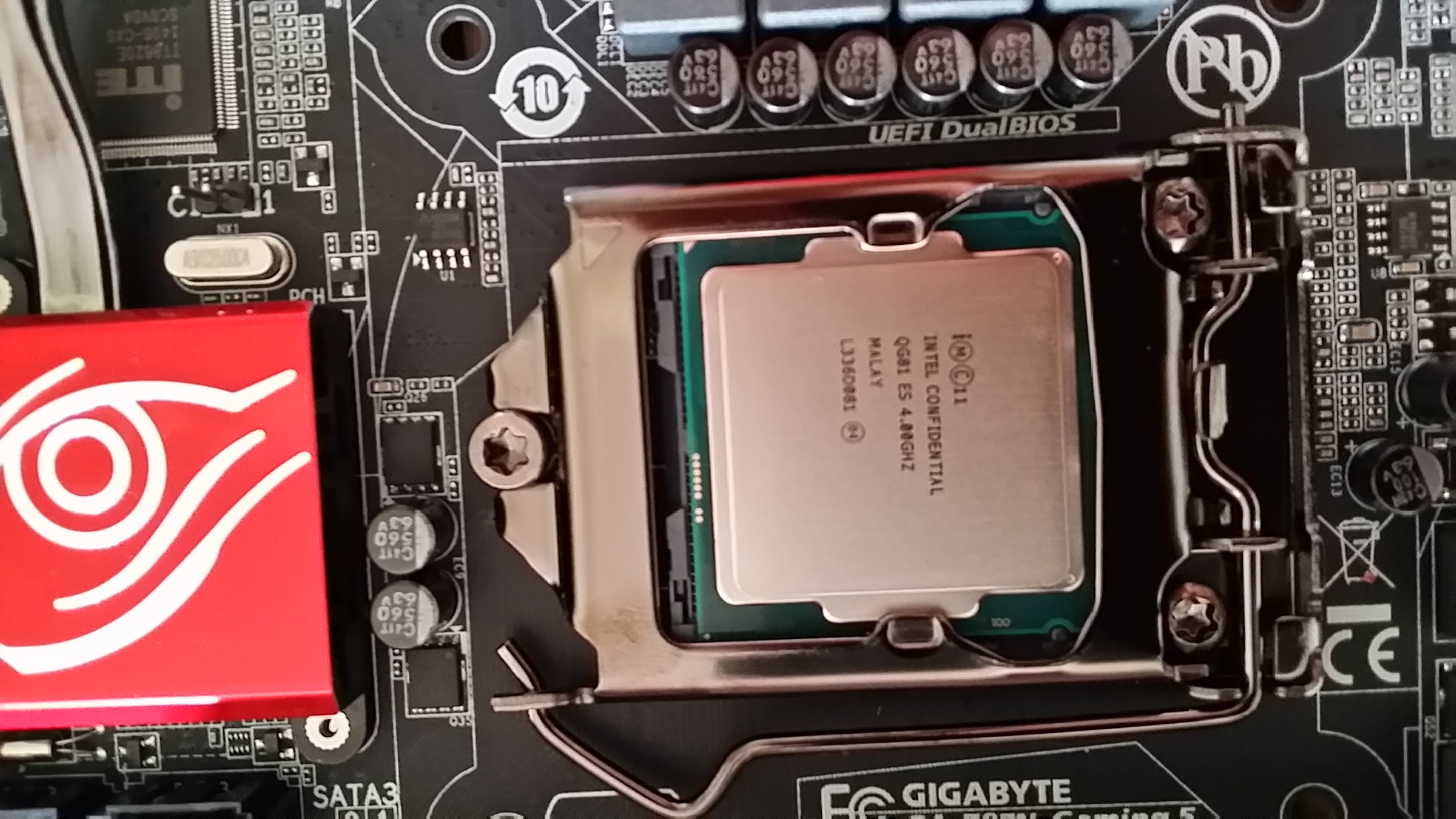 A combination of (now Qualcomm) KillerNIC Gigabit Ethernet and PCIe WiFi, 4 SATA plus 1 eSATA, all 6 Gbps, Realtek1150 audio codes, and, yes, still having one PS/2 keyboard or mouse connector besides the USB, just in case. The video interface portion didn’t disappoint either,

with DVI, HDMI and DisplayPort – but no Thunderbolt, though. And then, you would notice the 24+8 power connectors, the full complement needed for a decent OC gaming platform feeding a high end GPU, all in a Mini-ATX format.

For this first look, I put up the system to run in the open, before finding a truly good Mini-ATX casing and PSU that would do it justice – not an easy task knowing this compact format’s limitations. The setup, including CPU, HSF and memory, took all of ten minutes, and, this being a Mini-ATX board, it was darn easy to handle the connectors and cables.

Even though the default BIOS was dated April – and I would try to keep it as long as I can, since it keeps the TSX transaction memory extensions turned on, unlike the versions from June onwards – it fully supported the i7-4790X out of the box, including the 4 GHz default frequency and 4.4 GHz Turbo. The CPU voltage was a little high in my mind, going at 1.35 V, so, as incrementally overclocking it, I managed to find a sweet spot of 4.6 GHz default frequency at 1.32 volts CPU voltage. The resulting CPU Tcase temperature also dropped to 45 degrees Celsius, as you can see in the lovely FullHD UEFI BIOS screenshot. 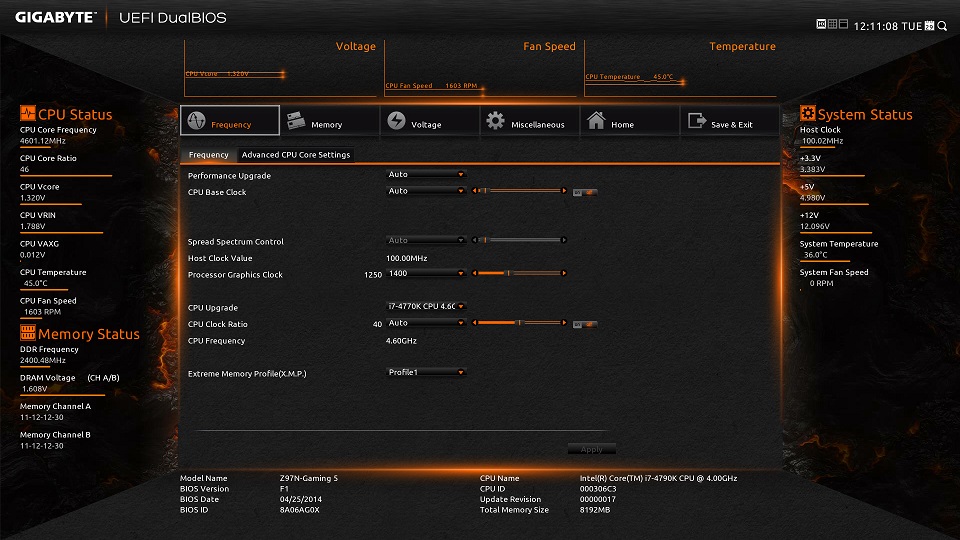 In the same screenshot, you can see that I managed to slightly tune the Kingston memory and reduce the latency to 11-12-12 at DDR-2400 while dropping the voltage a bit to 1.6 volts. This is only a minor first round tune in to basically lower the power requirements ever so slightly so that a standard 150W Mini-ITX/ITX PSU can handle the whole box including a SSD and a DVD/BD-ROM drive.

Talking about UEFI BIOS, It looks great and gives out a lot of info, but, frankly, functionality wise, all that was there in the old text-mode BIOS user interfaces anyway, and there would be less system overhead with them. Having FullHD UEFI doesn’t save you from having to

toggle multiple screens still, and sometimes there can be a slight lag in getting a setting applied and in effect. Luckily, Gigabyte still provides the text mode BIOS option here.

So, what to say after this first look? From the point of achievable performance and features, the combo of Intel Devil’s Canyon and Gigabyte GA-Z97N Gaming Mini-ITX board gives up almost nothing compared to much larger format OC platforms, unless you need much more RAM or dual GPUs, among other things. It would be even more fun if Intel’s graphics was yet another step better for actual 3-D game use, but then, I guess, that’s a beyond-Broadwell question for those who’d be willing to wait for “GT4” graphics in Skylake CPU generation. If, aside of 3-D gaming, you’re happy with UHD capable setup that can nicely handle your new high-end TV and still allows an extra GPU if you move it to a little bigger casing, then this is the thing for you.

Based on this initial experience – upcoming benchmarks notwithstanding, since they will be in line with other similar Devil’s Canyon platforms – I would recommend the setup with this Gigabyte board for a Mini-ITX HTPC, on one condition: it should not be fitted into the tightest Mini-ITX casings out there.

Give it a bit of room to spare, including one for a bit better PSU than what Mini-ITX boxes usually supply. Here I ran it with a standard 500W ATX PSU for the initial stability purposes, however the main review will include trying out a few Mini-ITX casing and PSU combos on it right out of Shenzhen factories in a week’s time – after all, it will be one of our Mini-ITX reference platforms until Broadwell shows itself.