Jeff Bridges as 'The Giver', and Brenton Thwaites as 'Jonas'

Dystopia themed works have come to rival the wizarding world of Harry Potter, and the vampiric machinations of Stephanie Meyers as the current trend in young adult literature and films. The current glut of post-apocalyptic and dystopic works with anti-establishment sentiments can in some part be credited to the wild success of Suzanne Collin’s The Hunger Games. But years before Hunger Games, there was The Giver, which has since become a staple on middle school bookshelves. And years before the latter was adapted into a film, Jeff Bridges – “The Dude” – was already making plans to turn ‘Giver’ into a movie.

Finally out of production hell, and (perhaps) inconveniently surfacing at a time when people are getting tired of sixteen year old heroes single-handedly conquering oppressive regimes, Giver is thankfully not the Hunger Games ripoff that it had looked like it would be to many long-time fans of the book. Though perhaps it slightly tones down its source material (which was on many banned reading lists for its controversial nature), The Giver is still a thought provoking film with a deep strata of underlying messages and philosophical themes.

Giver begins, suspiciously enough, in a black and white world of white washed buildings, in a symmetric and orderly society perched atop a vast plateau. This is our first glimpse of the film’s wonderfully effective but subdued visuals, which convey an impressively convincing futuristic world with cool technologies that seem believably evolved from our own, and which never distract from the story. Any feelings of offness that we get from the unexpected use of monochrome quickly fade away in a world of polite people who co-operate in a seemingly perfect society, where citizens of a community meet to celebrate the achievements of local children who are graduating to higher grades, and the lives of senior citizens who proudly stand in a row waiting to be released to “Elsewhere”. 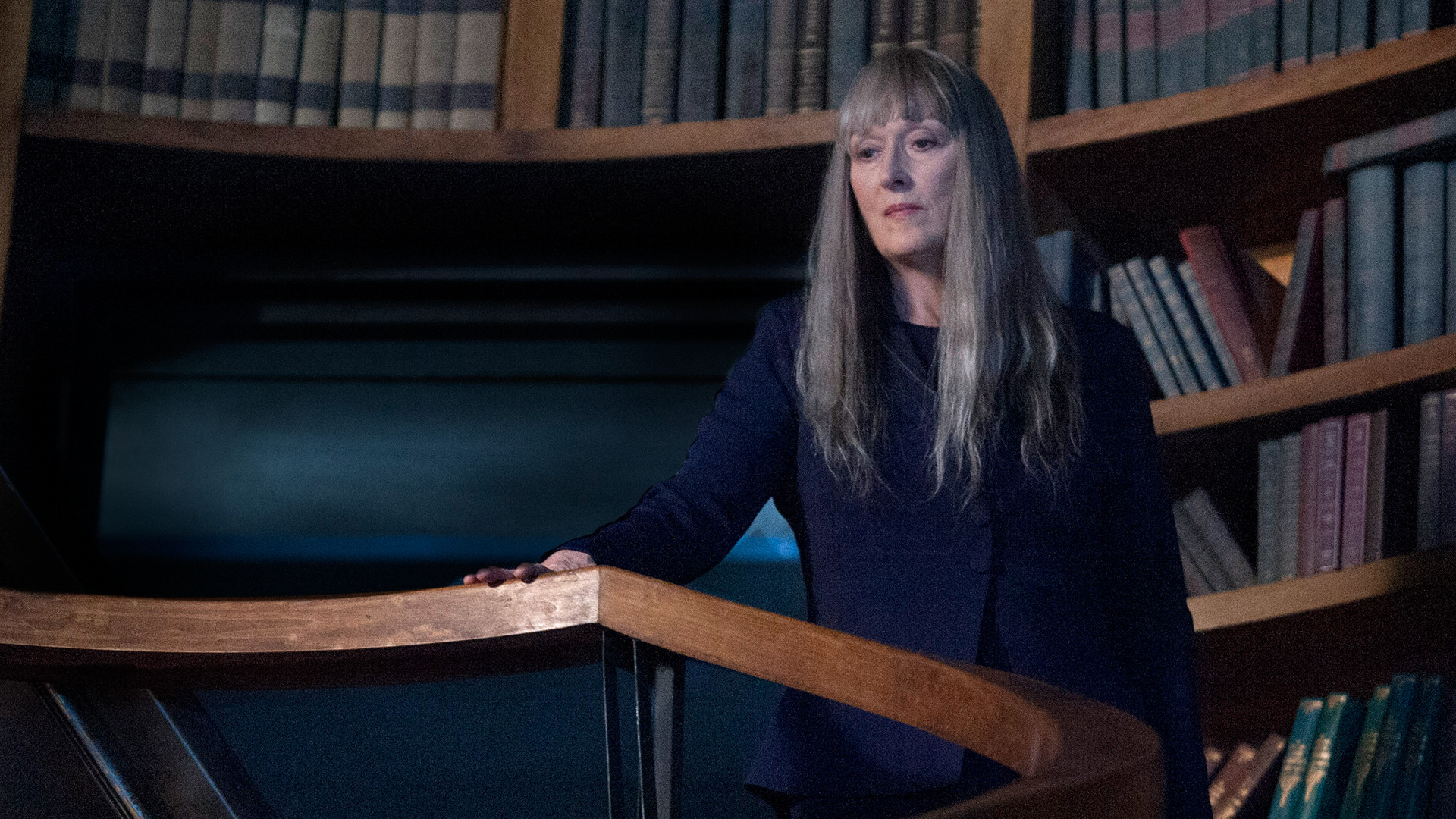 Meryl Streep as the Chief Elder

Main character Jonas, played by Brenton Thwaites, stands with his fellow students awaiting assignment to the roles they will play in society – this evokes a comparison to The City of Ember, although it turns out that this work was also written long after The Giver. It’s probably fair to believe that most seemingly dystopic tropes you witness in this film were actually invented by the material it is adapted from. Jonas is skipped by the Chief Elder played by Meryl Streep, who apologizes for her seeming mistake after the entirety of Jonas’ graduating class have already been assigned their jobs.

It turns out that Jonas has been selected for the society’s most revered position: the receiver of memories.

Told that he is now allowed to disobey the society’s many mandatory stipulations (such as taking certain medications and never lying) as part of his training, Jonas’ life is turned upside down as he begins to learn about the vast world of experiences outside of his society’s collective consciousness. Jonas reports every day to the former receiver of memories played by Jeff Bridges, who begins to share with Jonas memories of the world before there was “sameness” — hence the titular “Giver”.

Jeff Bridges as ‘The Giver’, and Brenton Thwaites as ‘Jonas’

As it turns out, the society in which Jonas lives has used technologies such as climate control, genetic manipulation and medicine to strip away differences in the world, including snow (it’s always warm and idealic, even in the winter), emotions, religions, and — to Jonas’ shock — color, which he begins to see. Jonas stops taking his morning injection which seems to stifle feelings — especially romatic ones – and begins to experience love and loss.

Thus begins a dark turn. A society which seems perfect on the outside is slowly revealed to have a very sinister core, as Jonas learns that eldery people released to ‘Elsewhere’ are in fact euthanized, and infants that seem unfit to live are given the same treatment.

Jonas’ horror grows in volumes as he realizes the clockwork society around him that doesn’t even see the wrongness in their way of life.

The rest of the movie is a tale of love and peril, as Jonas tries to teach his muse Fiona — played by Odeya Rush — what it means to love, and embarks on a journey to restore to his society what it has lost.

The performances in this movie are all very high quality as a whole, but Bridges — as expected — steals the show with his battered yet vulnerable interpretation of the ‘Giver’ character. Streep, who plays the antagonistic Chief Elder, is a close second.

The Giver has its flaws, and ardent fans of the book will find reason to criticize it. Certain minute details have been changed, such as the book’s morning pill which has been replaced with an injection (perhaps to avoid comparisons with The Matrix). But more important details are changed as well, as Jonas casually experiences music halfway through the movie, when in the book, this joy did not occur until the final page.

The cinematography, while brilliant in most regards, certainly isn’t perfect either. The gradual transition from black and white to color, which was used to great effect in classic film The Wizard of Oz is interesting as a plot device, but spoils the reveal that the book easily manages to hide as a work of literature. But this change is perhaps inevitable in a book to screen translation – a more important complaint is that while the makers of ‘Oz’ knew how to film in black and white, the makers of The Giver clearly do not. The black and white scenes were obviously filmed with color methods, and seem to have been cheaply desaturated, and come across as overly bright and exposed.

But in the end, The Giver – unlike some recent book to film adaptations, such as The Hobbit – is very faithful to the spirit of the book. Its mastery as a work of dystopia translates successfully from book to screen.

In The Giver, black and white is a visual metaphor for what its society is not.

Like real life evil societies, such as Hitler’s National Socialist Party, things do not seem amiss from the inside, except by a very few. Not only do people in this society seem happy, and content, but things seem pretty good — if questionable — to viewers as well. There is no oppressive government murdering children in gladiator-esque massacres a la Hunger Games, or government sanctioned days when all crime is legal a la ‘The Purge’.

In its place is a real world with real people, who have a definable but skewed Ethos that has come to guide their lives (“If it’s against the rules”, asks Jonas’ best friend Asher, “How can it be right?”)

‘Giver’ moves past the mindless rebelliousness that has come to mark teenage fiction, and asks us to contemplate the fundamental components of our society.