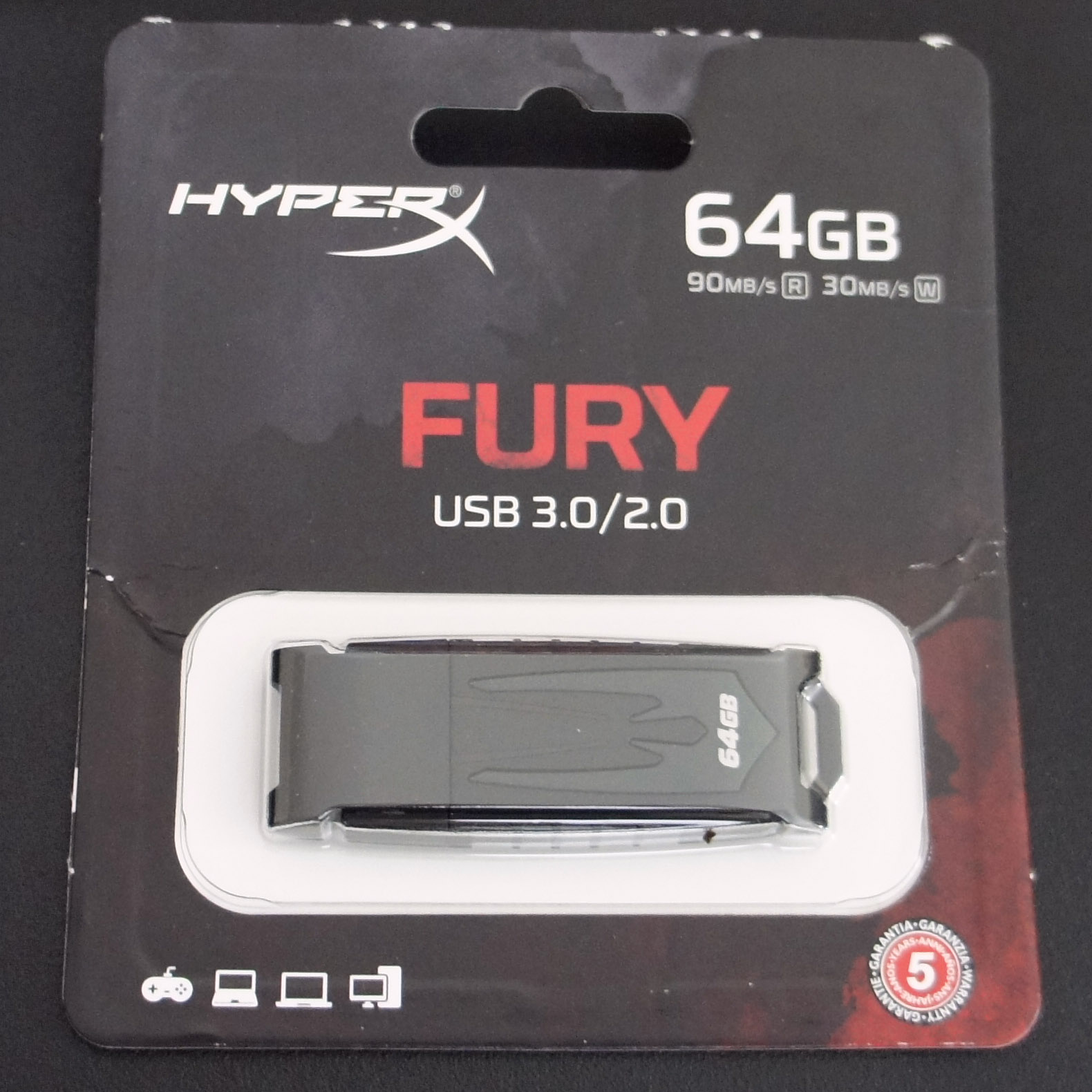 HyperX, (a division of Kingston) recently released its new series of flash drives, the HyperX Fury USB 3.0 Flash Drive line. The flash drives are designed to appeal to budget-conscious gamers and enthusiasts, while providing solid performance. This review will be taking a look at the 64 GB version of the drive (model number HXF30/64GB).

The Fury drive feels solid in the hand. It has a lanyard loop on the back to attach to a lanyard or keychain. It also has a cap, as opposed to utilizing a slider to protect the USB plug. The cap can snap onto the back of the flash drive when the drive is in use to help prevent the user from losing the cap. It is this reviewers opinion that it would be better if USB drive caps had some sort of attachment to the body of the drive, in case the cap were to accidentally fall off the top of the bottom of the drive. However, in the case of the Fury, the cap appears to attach solidly to both the USB plug as well as the back (though not quite as securely on the back).

In order to test the Fury’s performance, two benchmarks were run: AIDA64 Disk Benchmark and CrystalDiskMark. The tests were run both while the drive was plugged into a USB 3.0 port as well as a USB 2.0 port. It should also be noted that the chipset used for the benchmarks was an Intel X79 board, which does not support native USB 3.0. It is possible that speeds would be slightly better in a USB 3.0 port on a newer chipset.

First up are the CrystalDiskMark results: 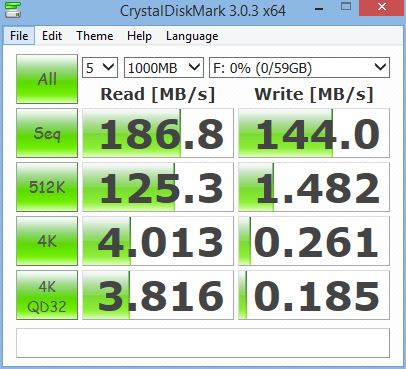 The Fury managed a sequential read speed of 186.8 MB/s and a sequential write speed of 144.0 MB/s while plugged into the USB 3.0 port. Both of these numbers far exceed the expectations of the listed specifications for the drive, but it is expected that the drive will lose some speed after some usage. Also, since most typical usage of a flash drive is not simply sequential reads and writes, the speeds will be diminished in general use cases. 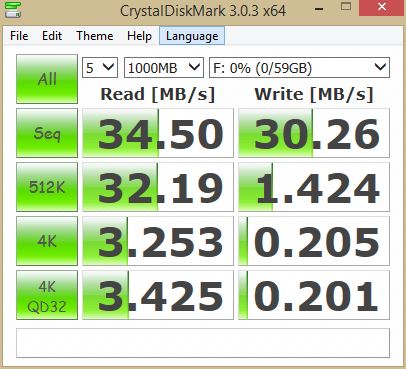 In the USB 2.0 port, the drive had a sequential read speed of 34.50 MB/s and a sequential write speed of 30.26 MB/s. These numbers show that the limiting factor here was clearly the USB 2.0 specification, and those are approximately the speeds a user can expect from any drive running on USB 2.0 that would otherwise have higher speeds.

Next up are the AIDA64 Disk Benchmark results: 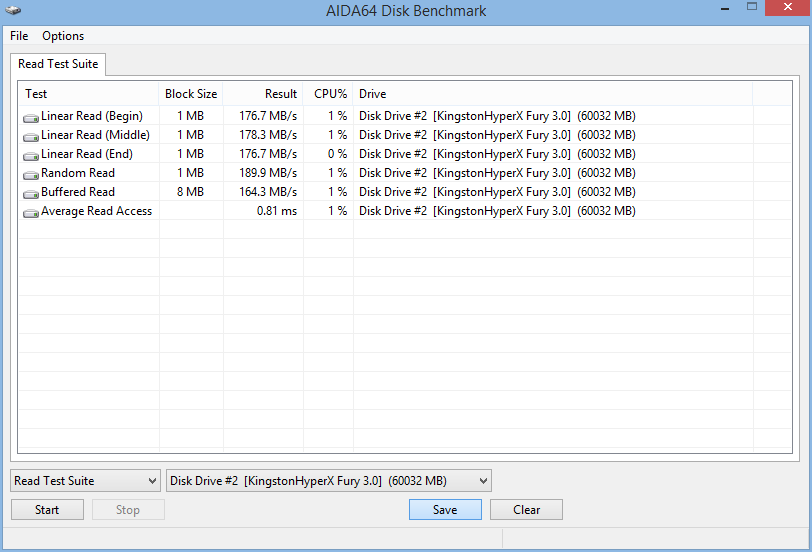 In the USB 3.0 port, the Fury 64 GB USB drive performed admirably, putting out linear reads of approximately 177 MB/s and a random read of just under 190 MB/s. It also had an average read access time of 0.81 ms, which is quite impressive. 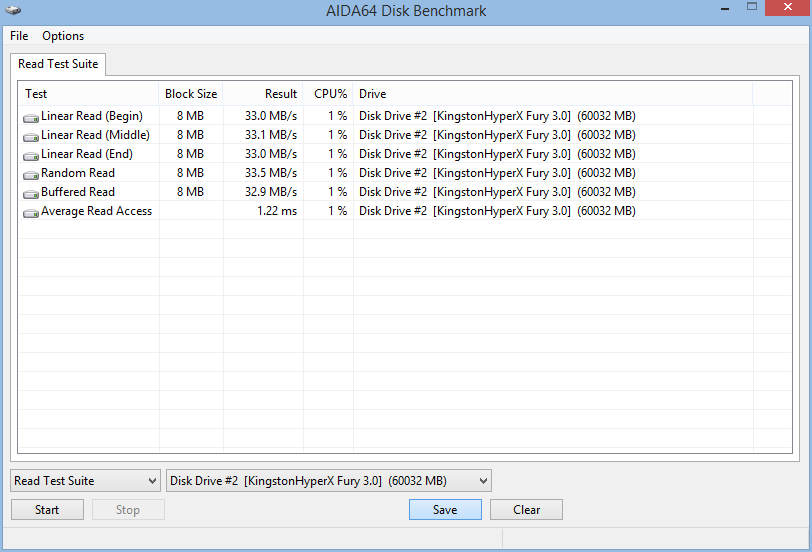 The Fury plugged into the USB 2.0 port again performed as expected, with linear read speeds almost exactly 33 MB/s and a random read speed of 33.5 MB/s. The average read access time also took a hit in the USB 2.0 port, coming in at 1.22 ms, a 50% increase.

The HyperX Fury USB 3.0 64 GB flash drive currently retails at a price of $49.99. Other 64 GB USB 3.0 flash drives can be purchased online for as cheap as $25, but that does not mean the Fury is not worth it. Attributes to consider other than price include durability, warranty, reliability, fit and finish, and performance. Even though Kingston itself has other 64 GB USB 3.0 flash drives available for approximately $30, those tend to have a target audience of general consumers, whereas the Fury is marketed towards gamers and enthusiasts.

The drive itself is clearly nicer and more aggressive in appearance than a typical consumer flash drive. Also, as stated earlier, the drive itself feels very well made and sturdy. It also has solid performance, far exceeding its listed specifications. However, considering there are so many options available at under the $50 price point, it makes it difficult to suggest the difference in price is worth it for the Fury 64 GB USB 3.0 drive. Time will tell as the drive gets used, and its reliability will be tested. Also, the drive will eventually start to drop in price.

Considering the drive individually, it’s a solid product with great performance and this reviewer would highly recommend it. For those wanting to save more money, they can easily find some cheaper drives that may share similar performance and specifications.