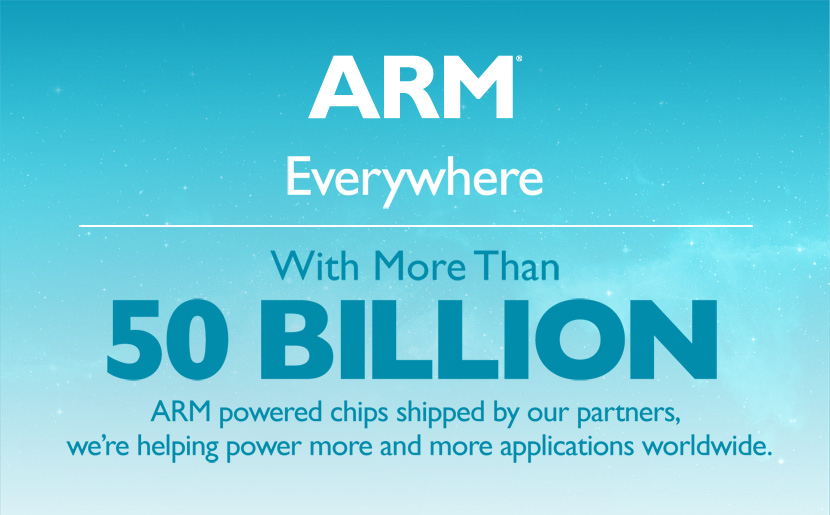 ARM announced today the signing of the 50th licensing agreement for its ARMv8-A technology, which includes support for 64-bit computing.

ARM stated that the licensing agreement demonstrates “continuing strength in demand for the company’s 64-bit-capable ARM Cortex-A50 processor family and ARMv8 architecture licenses.” Current processors in the Cortex A50 series include the Cortex A53 and the Cortex A57, both of which are scheduled to be available in consumer devices starting next year. The Cortex A53 core is designed to be energy efficient, while the Cortex A57 core is ARM’s highest performing processor.

The licenses cover the ARMv8-A architecture as well as Cortex-A57 and Cortex-A53, which means that licensees can either use stock Cortex A53 or Cortex A57 cores in their SoCs, or leverage the architecture license to build tailored cores, like Qualcomm does with its Krait line of processors. While 64-bit hardware is not yet mainstream, major silicon vendors like MediaTek, Qualcomm and Samsung have committed to launching 64-bit SoCs next year.

In recent years, ARM’s growth has been nothing short of astonishing, with the company announcing that it has signed more than 1100 license agreements for its processor designs. With over 50 billion chips powered by ARM, in the majority of the world’s connected devices,  it is unlikely the vendor will see a wane in demand anytime soon.