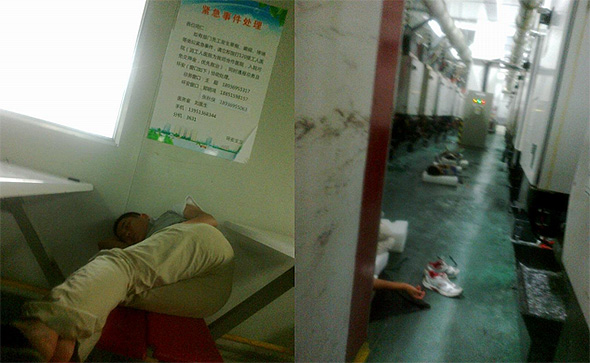 Apple (NASDAQ: APPL) is on the verge of releasing a new iPhone, and once again it has been targeted by labour groups over allegations of unsafe labor practices by one of its suppliers.

According to a report co-authored by China Labor Watch and Green America, employees at a Suqian, China based factory owned by Catcher Technology, a Taiwan-headquartered company, were forced to work excessive overtime and were working in an environment that had excessive aluminum shavings on its floor, no respirator equipment, and improper ventilation. In addition, the groups say that during their undercover investigations they have discovered that workers have not received any safety training.

Aluminum dust is flammable, and is a frequent cause of factory fires in China. Two Apple suppliers — Foxconn in Shenzhen and RiTent Computer Accessory in Shanghai — have suffered from explosions caused by aluminum dust.

“The investigation of Catcher Technology raises serious concerns around working conditions in Apple’s second-tier supplier factories,” stated Todd Larsen, corporate responsibility director for Green America. “We knew that we needed to make this information public to encourage Apple to take immediate next steps in addressing toxins and unsafe working conditions in their factories as Apple continues to ramp up production of the iPhone 6.”

For its part Apple has vigorously denied the allegations put forward in the report and says that facilities owned by Catcher Technology pass international standards and its own audits.

“Last year we conducted 451 audits deep into our supply chain so we could uncover problems and work with our suppliers to fix them, and we make it a priority to investigate every specific concern brought to our attention,” Apple said in a public statement.

Tainan, Taiwan headquartered Catcher Technology was not picking up the phone in its office Friday. The company did however release a public statement where it said it was “committed to following Apple’s supplier code of conduct and will investigate thoroughly.”

The iPhone 6 is scheduled to be released next week.

The full report can be read here.