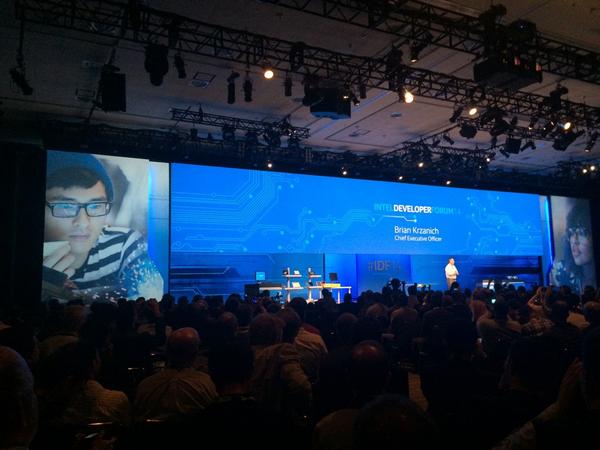 Intel’s (NASDAQ: INTC) second developer forum of the year — the first taking place during April in Shenzhen — officially kicked off in San Francisco Tuesday with a mobile theme as the event’s keynote was anchored around Intel CEO Brian Krzanich and other Intel executives taking the stage to announce the availability of Intel’s XMM 7260 LTE baseband in its first hardware win, as well as a series of developer tools for Android developers, as well as other mobile themed announcements.

On stage Intel’s Kirk Skaugen, Vice President of the PC Client Group,  said that the first hardware win for Intel’s XMM 7260 baseband will be in Samsung’s Galaxy Alpha smartphone, which is now shipping in Europe, Asia (excluding China/Korea/Japan), Australia and Latin America. The XMM 7260 and the 7262 modems are Intel’s first LTE Category 6 compatible basebands.

Sticking with the mobile theme, Intel executives also said on stage that Intel would be providing Android developers with an Intel reference design program to assist developers in developing hardware and apps for Intel-powered Android platforms. Intel’s Doug Fisher, the company’s general manager of software, said that Intel is committed to providing updates to Android two weeks after Google pushes out updates to AOSP.

Later during the keynote Krzanich was joined on stage by Michael Dell to show off the Dell Venue 8 7000 tablet which contains Intel’s new RealSense snapshot technology. This creates a depthmap and allows users to fine tune focus adjustments to create a more accurate and true-to-life picture. Exact specs, pricing on the tablet have yet to be released but Dell did mention on stage that it would have a 2K resolution (2560 × 1440 pixels) and an 8.4-inch OLED screen.

At the Shenzhen IDF conference earlier this year, Intel’s Krzanich said that Intel was targeting to have 40 million Intel-powered tablets shipped by year’s end. Krzanich did not provide much in the line of in-depth information detailing exactly how many tablets had been shipped to date, or how close the company is to meeting its goal,

Always a place for the PC

While the bulk of the keynote at IDF was about mobile, and emerging markets from mobile such as wearables, Intel’s Skaugen also gave attendees the first official preview of Skylake — Intel’s next-generation architecture that’s due out next year. While there were no technical specifications disclosed, Skaugen did demonstrate a reference design of a 2-in-1 notebook powered by Skylake playing 4K video.

In contrast to Broadwell — which is largely targeted at low-power mobile platforms — Skylake will broadly target Intel’s customers and will find a place in a variety of form factors. Skylake will be built on Intel’s 14nm process node, and Skaugen said that development of the platform is progressing and its “health is great.”

Intel kicked off the year at CES by announcing Edison, a tiny computer the size of an SD card that comes packed with WiFi, Bluetooth, and an Intel SoC.

Targeted at a variety of use cases from wearables to makers, Intel hopes that the system would revolutionize hyper small form factor computing. At IDF, Krzanich said that Edison is now available with pricing starting at $50.

Check back later for more from San Francisco as IDF continues.