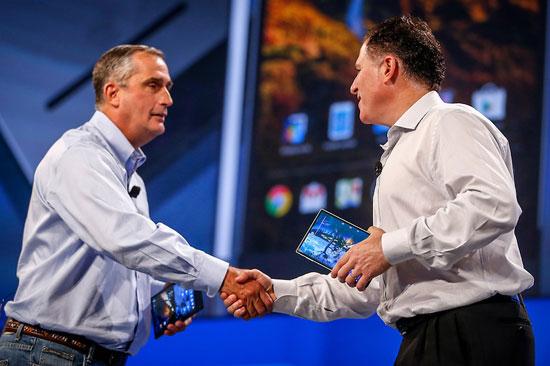 They used to focus on things that made money.

After the close of the first day of Intel’s Developer Forum in San Francisco, long term shareholders of Intel (NASDAQ:INTC) may be left with mixed feelings.

After all, the company put equal, but not equally prominent time, into its traditional high-margin market — servers — and also to the unproven, currently unprofitable, market of wearables and mobile. Granted, the much awaited and much needed refresh of Intel’s Xeon CPU was Intel’s first announcement of the show — but that occurred at a day zero event before IDF kicked off which lacked the prominence or importance of the forum’s opening keynote.

The reason for this is simple: Xeons don’t attract the attention from the usual mainstream consumer press that fashion-buzzword topics such as wearables and mobile do. Even though Xeons are essentially the brains that power the hundreds of millions of web-connected smart devices and their respective app stores, they don’t get the attention they deserve because the public simply is not interested in them. Instead, a market where Intel has yet to make a dollar — in fact is spending billions just to acquire its first customers — steals the show.

While it may be that the unproven markets of wearables, mobile, and the amalgam,  Internet of Things, one day proves to be a profitable division that day is not yet here. Intel does have some promising advancements with x86 in low-power (traditionally ARM dominated) fields, but these advancements really won’t be shown until Broadwell makes its way to these devices after the Atom line. Which, of course, relies on customers signing up to make devices that incorporates these chips. And that, of course, relies on Intel’s chips being the more competitive option than ARM.

All this is certainly possible. It could be that the next-generation of x86 — in the form of Broadwell and later Skylake — powers award winning devices of all form factors. There always could be high-end or extreme versions of ultra-mobile devices running on Core-class processors. But it’s also possible that this does not happen leaving Intel with an investment that would have been better spent elsewhere.