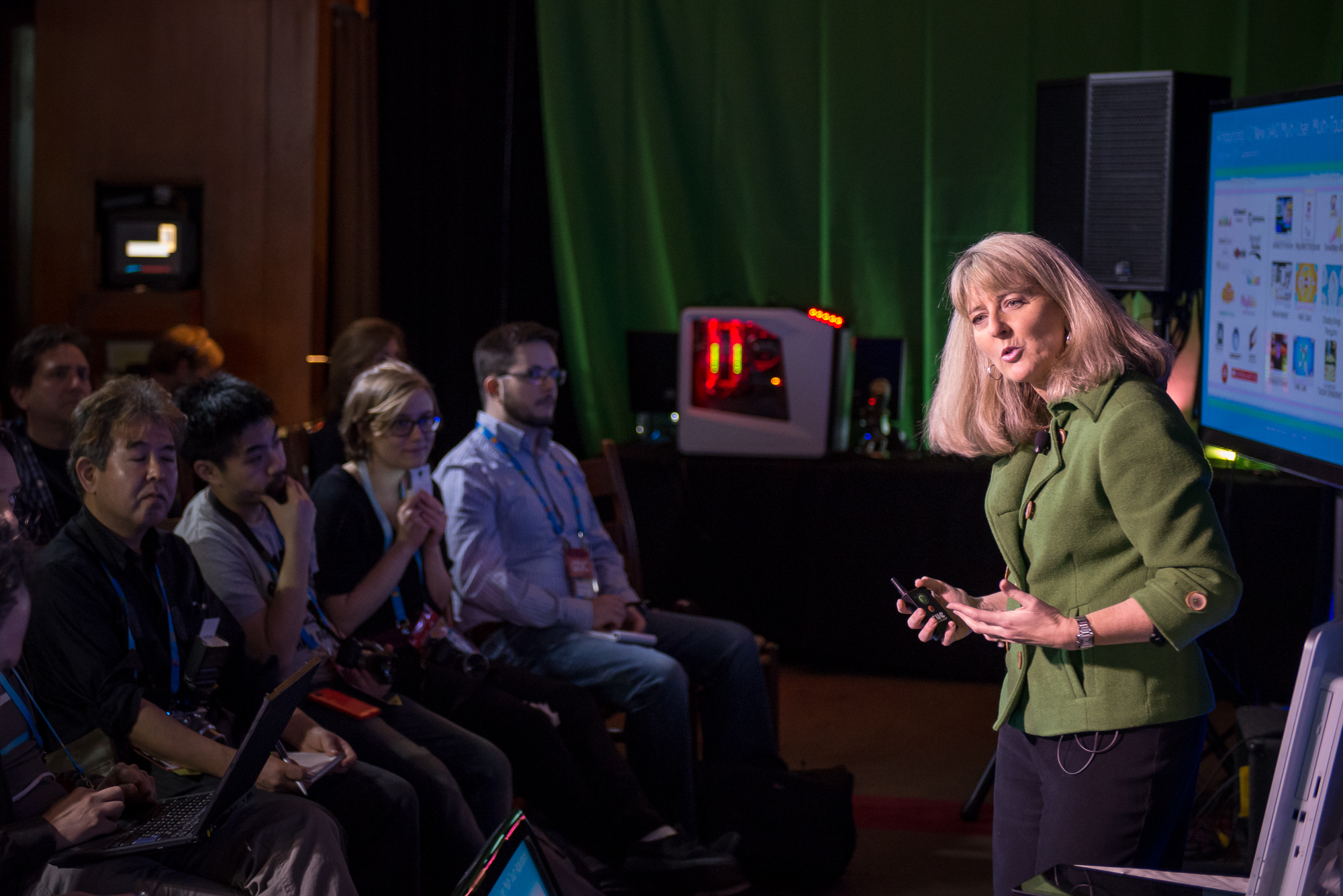 Lisa Graff presents at a keynote earlier this year during the Game Developer Conference.

For all Intel (NASDAQ: INTC) wants to hype new unproven markets such as wearables and mobile, desktop along with servers, are still the company’s cash cow.

Intel didn’t share much in the line of desktops at IDF, as the company already made its big desktop related announcements earlier this year at the Game Developer Conference in San Fransisco as well as in June at Computex. The company did hint at Skylake, the successor to Broadwell, but didn’t reveal any important technical information (Skylake, however, was old news as its existence had been long leaked already).

But as desktop is one of the two main pillars of the company, getting a gauge on the desktop “state of the union” is important. Bright Side of News*’ Sam Reynolds sat down with Lisa Graff, Intel’s GM and VP of the Desktop Client Platform division, to see where the company has gone and where it is going in the desktop space.

Bright Side of News*: Intel is clearly pushing hard to expand its presence in Shenzhen, as was clear at IDF Shenzhen earlier this year. But so far this has been mostly for Intel’s mobile efforts. What about the Desktop Group?

Lisa Graff: Shenzhen has come from doing lots of different devices — CD players in the past, tablets, etc. So there’s a number of things going on there with desktops, primarily with all-in-ones. You’ve got a whole lot of the larger ODMs as well as OEMs there [doing all-in-ones]. Primarily, that’s where their interest lies.

Overall the PC group is there, enabling them, and helping them build what they want to build.

BSN*: Right now Intel has a commanding lead in the enthusiast CPU space. Technically speaking, why, in your opinion, is Intel leading by such a large margin against the competition?

So, you need a core to be high-performance even if that software is single-threaded. The per-core performance needs to be very good. We can always scale and add more cores to the die. Those are the two aspects from the design standpoint. We’re always looking at how we could increase that performance. There’s a lot of different ways you could do that, and many of them are hard. Our per-core performance compared to the competition is very good; four-cores does not equal four-cores as I’m sure you know.

Those are the design aspects, but our other advantage is in process technology. Intel, as you know, is years ahead in process technology and we’ve put a huge amount of investment building our own fabs with a tight coupling between designing the processor and designing the manufacturing process. This is all done years ahead of when the product comes out so you can fine-tune everything to get the most performance out of the chip. All of that pays off in the end if you can have faster transistors that are less expensive, which you can put more of them on a die.

We know we have a customer base that will pay for performance so we’ve invested in it.

BSN*: Let’s shift to Broadwell on the desktop. Can you clarify the situation regarding PCI-Express? Some say that it may be intentionally slowed to give Intel’s Iris graphics a leg up.

LG: We’re only saying one thing about Broadwell on desktop: which is we are going to bring Iris graphics. We’ll come out with more details later, but we have confirmed that we will bring Iris Pro to desktop — meaning LGA. We think that’s going to enable us to have nice little mini-desktops — you can save the power, heat, thermals and cost of a discrete graphics card in these smaller form factors.

BSN*: As a follow-up, how do these small form factors play into Intel’s  broader vision for the desktop?

LG: Look, regardless of these small form factors, a lot of people still buy regular towers. So I don’t think there will be one size fits all, where this new “nirvanna” thing replaces everything. People have different needs.

For minis I think it’s [a few] things: one is there is absolutely a desktop replacement where the usage is such that the space saving is one of the big things we’re going after. This might be people who are already using small form factor. Second, there are new usages for minis. That’s the easy-embedded, standards-embedded use case. Point of sale is an example.

BSN*: Thanks for your time.