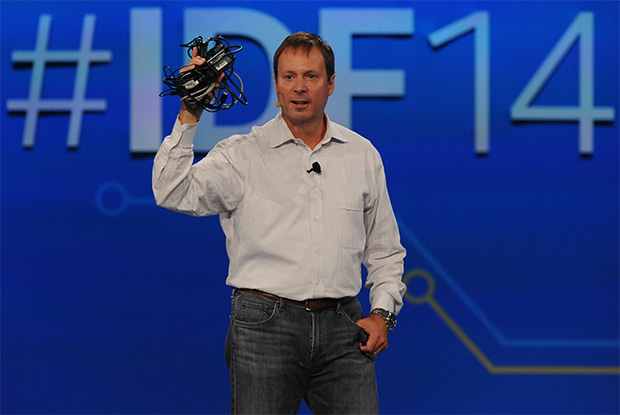 On Wednesday at the Intel Developers’ Forum, Intel (NASDAQ: INTC) unveiled its plan to remove wires from the PC workplace.

During a keynote on Wednesday, Intel executives announced that Skylake — the Desktop and notebook-focused successor to Broadwell — would be “fully wireless”. That means that the future, according to Intel, is one where the daily activities for devices of docking, connecting one’s computer to a display, as well as charging will all be done without the use of wires for devices that use the company’s next-generation CPU platform.

This wireless experience will be done via a suite of technologies. For charging, Intel will jump onboard the Rezence standard — an alliance with members from most major manufacturers including Asus, Lenovo and Dell — while for wireless display Intel will use its own standard called “WiDi”.

The slide below explains specifically how Rezence will work on future Intel platforms. The coils on both ends will be tuned to 6.78 MHz, and Intel says that measures will be in place to prevent overheating of the coils or interference from other metallic objects that may be near the two devices. For example, the resonant coupling frequency will be set to 6.78 Mhz which apparently is a safe zone to avoid interference. 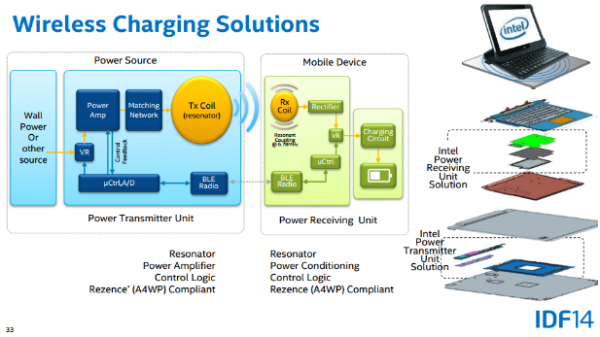 For wireless displays, Intel is pushing a self-developed standard called WiDi Pro. WiDi isn’t an inherently new standard, but Intel is looking for a mea culpa and redo for this new effort, that’s now GPU accelerated, starting next year with the fifth generation of Intel Core chips.  Intel is targeting this platform for enterprise environments, removing the hassle of plugging in displays, projectors and other such devices. 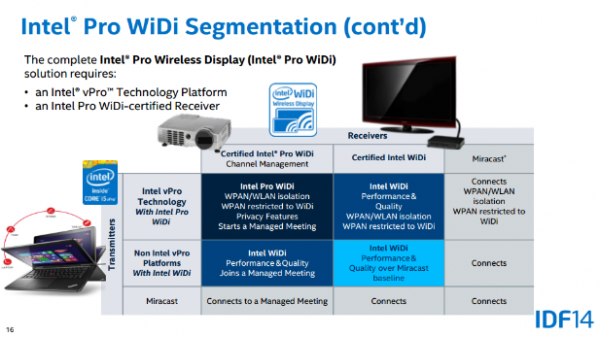 While these are all promising technologies, the real question is if this is the best direction for connectivity.

Cluttering of the electromagnetic spectrum is a big problem for all users, especially those in an EM-crowded environment that are trying to connect to a wireless network.

In environments with hundreds of users attempting to connect to the internet via WiFi, WiFi quickly becomes overcrowded and unreliable. Technology journalists that attend big conferences such as CES of Computex will gripe non-stop about the unreliability of WiFi since the rush of people attempting to connect to the network overwhelms routers and leaves bandwidth something something to be desired.

An increase in EM traffic from a move away from cables means an increase in interference. In environments where the network is densely packed — such as a tradeshow — the potential for things stopping in their tracks due to EM crowding is immense. Any mission critical applications, such as an executive’s keynote, would always be done via traditional wired connections.

In the end this wireless suite of products may have its applications and usages. But institutional mistrust — particularly because of possibilities of technical failures or security issues with the wireless projectors — will stop these devices from going mainstream.