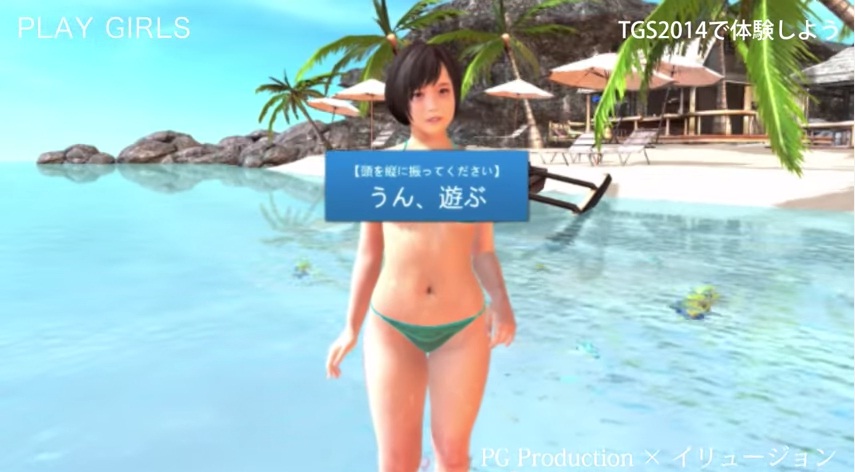 Immersion is undoubtedly the most important aspect of VR. Who can deny the wonderful sensation of seeing and hearing inside a virtual fantasy world? But you know what’s even more fantastic? Bringing the ‘R’ in VR closer to us, and there’s no other better example of this than this upcoming VR game that lets you play with bikini-clad ladies at the beach.

PlayGirls is the brainchild of PG Production and Japanese game company Illusion that combines VR and lovely AV actresses. Why are actresses involved you say? Well, the concept is described as the “Sexy Actress Perfect Simulation Project”, which, as suggested, recreates an actress in 3D by using her physical data. The recreated 3D character is then placed in a virtual environment, where the user can interact and watch her play. All you need to do is strap on the Oculus Rift, and voila, in you go to the virtual beach with the bikini ladies.

The concept was first introduced at the Tokyo Game Show 2014 event last week, where its developers have opened a booth for visitors to test the trial version of the project. As for how impressive the result is, you can probably see in the short teaser below. There is even a brief video that introduces one of the actresses that will be featured in the game, indicating that there will be several actresses in it and even the chance to add extra characters through DLC.

The final version is yet to be revealed but gameplay-wise, it would definitely be a VR dating sim, though it is uncertain if the setting’s going to be limited at the beach. Regardless, the proof of concept is there, VR plus bikini ladies equals eye candy goodness. If that is not enough for you, then you should probably check out what Sony and Bandai Namco has in store for the same concept.