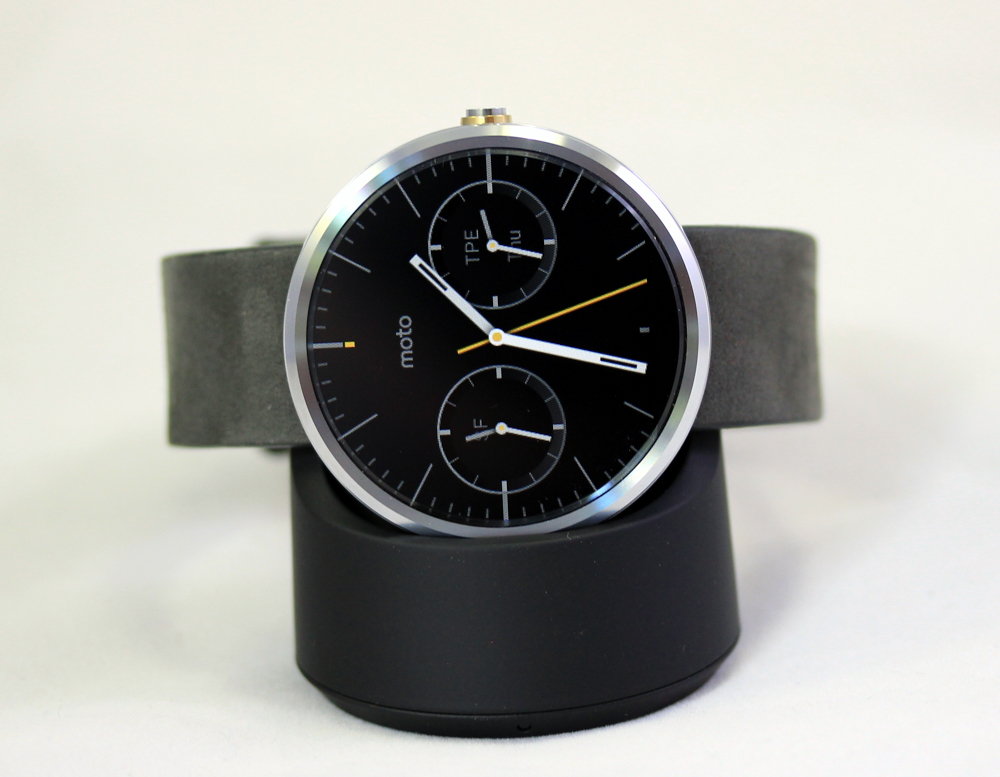 Moto 360 in its inductive wireless charging base

When Android Wear was released there were only two options available, the Samsung Gear Live and the LG G Watch (currently being reviewed).  Unfortunately, those were rather uninspired and were pretty bland design wise.  When Motorola showed its design for a Wear device, it really got a lot of people excited as it is a striking design with a round LCD display under Corning Gorilla Glass.  It really looked like a watch and not some band that so many other wearables have ended up looking like.

New notifications pop up on the watch

Taking a closer look at the watch it becomes very impressive after having used the Samsung Gear Live.  The round LCD under the Corning Gorilla Glass looks absolutely great and gives it an inset look. The edge of the glass is beveled and the metal case is also beveled giving the device a nice look.  The metal case has a metal button on the right side and looks great and fits in with the design of the watch very well.  The back of the case is plastic and has an optical heart rate sensor, these in general are not that accurate and should be used as a good best guess reading.  The device complies with the IP67 code which means that is is dust tight/sealed  and can withstand being submerged in water at a depth of one meter for thirty minutes.  It would be suggestible to not get it wet, so that you don’t end up ruining the nice leather band by repeatedly showing with the device.

Horween leather is used for the band, and is very comfortable

The band is made from Horween leather and is beautiful and feels great on the wrist, and unfortunately is not user replaceable.  The fit and finish is impressive and is even shown in the buckle of the band.

The fit and finish is rather impressive on the Moto 360

The card system that the Android Wear employs is easy to navigate through on the watch.  Sometimes certain notifications are cropped on the round display (as seen below), as on the Samsung Gear Live screen they displayed properly.  This will likely be addressed by the app developers soon and will be displaying properly again.

The Bright Weather app text was cropped wrong on this display, were Gear Live displayed it properly.

The battery on this smart watch was better than expected (based on early reviews) and would have probably lasted about 36 hours at best.  Charging the watch couldn’t be easier with the Moto 360, as it comes with an inductive charging (Qi) base that you rest the watch in.  While on the charger the face rotates to display the time and charging status in the proper orientation. This Qi wireless charging solution is very likely the reason why Motorola opted for a plastic back on the Moto 360 because most inductive charging solutions like Qi are incapable of transmitting through metal.

The watch seemed to charge very fast in the charger.  With this charging method you will be thankful when you read the many reports of people busting their Gear Live devices when putting on and taking off the charger back.  It was noticed that the voice recognition wasn’t always the best, though it would be tough to figure out what is causing it.  It could be that I was not speaking clearly, loudly, or slowly enough for it to catch everything. Regardless of the device I have found the need to repeat commands to Google’s speech recognition multiple times on various devices. The microphone is located in the left of the metal watch case.

The Moto 360 comes with a pretty stock version of  Android Wear, though it does have some things to set it apart.  The watch faces that it is pre-loaded with look fantastic and can be customized with the Motorola Connnect app. With the app you can also set your default apps for different tasks, and it also holds your fitness profile which is used with the heart rate sensor.  The Fit app for the device not only takes your heart rate but also tracks how much activity you get each day.  The watch  reminded me daily to get at least 30 minutes of activity to stay healthy.  Included is also a pedometer that tracks the amount of steps that you take daily and will keep track of your daily figures.

The watch bands are not user replaceable unfortunately.

So what’s the verdict?

The Moto 360 really does the smart watch right as it really looks great and functions well with the Android Wear. You can really tell that Motorola has done something special here and by many accounts, out designed Apple and the Apple Watch.

The watch feels great on the wrist and with a band that buckles this is secure as well, as the Gear Live didn’t feel that way.  It is something that you can wear when you are dressed up and not feel self conscious as some might with having a plastic watch on.  There will be some display issues with the cards until the app developers make them display correctly on the round displays.  The $250 price is indeed worth the $30-$50 premium over the other two options.  If you are in the market for an Android Weat device, it will be very hard for you to be disappointed in this.