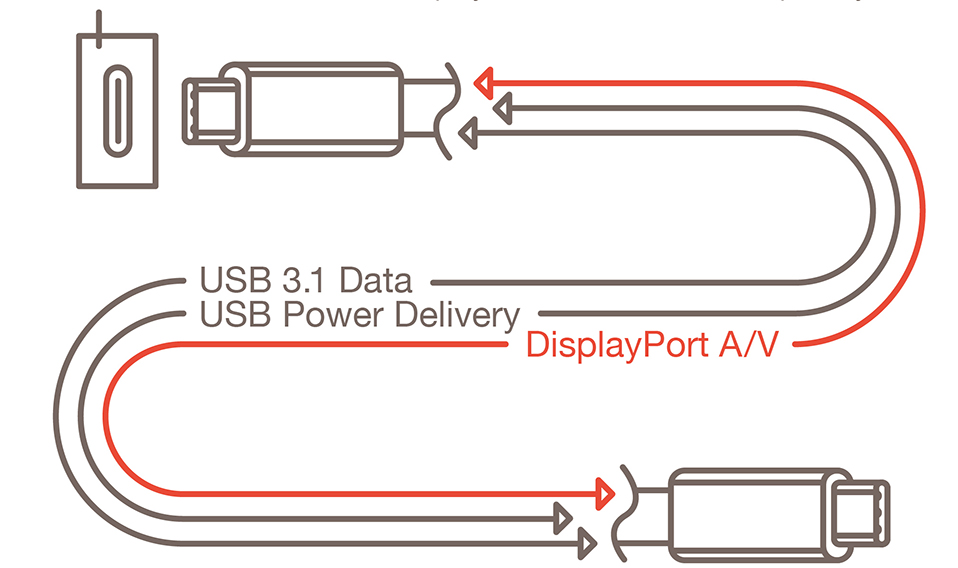 After just recently announcing the DisplayPort 1.3 standard, VESA has today announced yet another major step forward for the entire electronics industry.

VESA, the governing body behind DisplayPort Alt actually has been working with the USB 3.0 promoter group to integrate the new DisplayPort Alt protocols into the new USB Type C connector due to be implemented in future computers and mobile devices. The brilliance of this partnership and announcement is that it combines the simplicity of USB Type C with the interoperability of DisplayPort across various standards and connectors. Remember, USB Type C is the USB IF’s own third standard connector (in addition to A and B) which allows for a perfectly reversible connector that is not only significantly smaller than the current USB connectors, but also orientation agnostic and capable of delivering up to 100 watts of power.

With an industry standard USB Type C connector on both ends consumers can expect that their device will have up to USB 3.1 Gen 1 (5 Gbps) bandwidth, combined with up to 100 watts of power and DisplayPort audio and video signaling capability. This presents a direct challenge to Apple’s own Thunderbolt connector which is capable of both data and video like USB 3.1, but lacks power capabilities as well as the ability to send data, power and video at the same time. In fact, there have been rumors that Apple (NASDAQ: AAPL) is actually behind pushing USB Type C and DisplayPort Alt due to the fact that its Thunderbolt cables still require Intel’s (NASDAQ: INTC) proprietary technology and don’t actually help improve bandwidth much greater than what USB 3.1 Gen 2 offers. A USB Type C cable with USB 3.1 Gen 2 (10 Gbps) is essentially just as capable as Thunderbolt is, as both standards only support 10 Gbps per cable.

Also, with DisplayPort Alt, a laptop or mobile device manufacturer doesn’t have to worry about what display a consumer might want to use because DisplayPort effectively supports all legacy standards in addition to DisplayPort (HDMI, DVI, VGA).

It also removes the problem that DisplayPort has been having with manufacturers, which is battling for connector space on PCBs and fitting into manufacturers’ progressively thinner and thinner designs. Now, everyone will want to have a USB Type C connector in their devices purely because of the fact that it fully support DisplayPort Alt mode which means that you can get full DisplayPort functionality through a USB cable and don’t need an additional connector (like you would with HDMI or standard DisplayPort connector). DisplayPort Alt mode essentially means that mobile device manufacturers can toss standards like HDMI and MHL to the wind and adopt a single cable for everything while still supporting legacy standards at the same time.

With this announcement, device manufacturers can now focus on a single connector standard and unify around it on a global scale. It will satisfy governments’ demands to have a single power connector across all mobile devices and it may even entice Apple to move away from their own proprietary lightning connector in order to make consumers’ lives easier and manufacturing costs lower. No more apologizing for not having a lightning connector or worrying about whether or not a friend might have a spare charger. It also will reduce the amount of connectors and cables that consumers may have to deal with in general as the industry moves towards a single standard connector for virtually everything ‘cabled’.

USB Type C and DisplayPort Alt mode are a match made in heaven and are a really great example of when companies (and standards organizations) work together to create industry standards that make technology better for everyone.