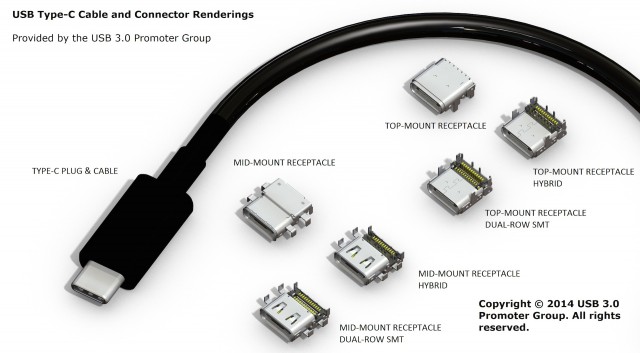 USB Type-C just got a little more competitive against Thunderbolt, as the Video Electronics Standards Association (VESA) announced today that it has developed a standard to integrate DisplayPort into USB Type-C connectors.

According to a release by VESA, the standard was developed in conjunction with the USB 3.0 Promoter Group — an industry consortium responsible for developing the USB protocol. Called the DisplayPort Alternative Mode (“Alt Mode”) the USB Type-C connector will be able to deliver 4K video (“and beyond” according to the release, but it’s unsure how far) USB 3.1 speed connectivity, as well as up to 100 watts of power.

“The USB Type-C specification was developed to provide consumers with a robust connector for everything from mobile devices to PCs, and when combined with SuperSpeed USB 10 Gbps and USB Power Delivery, it truly enables a single cable solution for the market,” said Jeff Ravencraft, USB-IF President and COO in a press release. “The USB-IF is also in the process of developing joint port identification guidelines. We’re working with VESA to ensure consumers can recognize when DisplayPort Alt Mode is supported on USB Type-C devices.”

Devices supporting the DisplayPort Alt Mode on a USB Type-C connector are also able to connect to an existing DisplayPort device using a reversible USB Type-C to DisplayPort converter cable.

Current implementations of DisplayPort Alt Mode over USB Type-C will use the DisplayPort 1.2a protocol supports transfer speeds of 5.4 Gbps per lane thus is able to pushout 4096 x 2160 resolution (4K) at a 60Hz.

While the promise of DisplayPort over USB Type-C is certainly intriguing, devices that support the standard are still a long way down the road. The premise, however, makes the USB standard even more competitive against Thunderbolt as USB already has a huge install base and does not require specialized — and expensive — controllers.

More information on DisplayPort over USB Type-C, along with devices that support the standard, will no doubt be available soon.