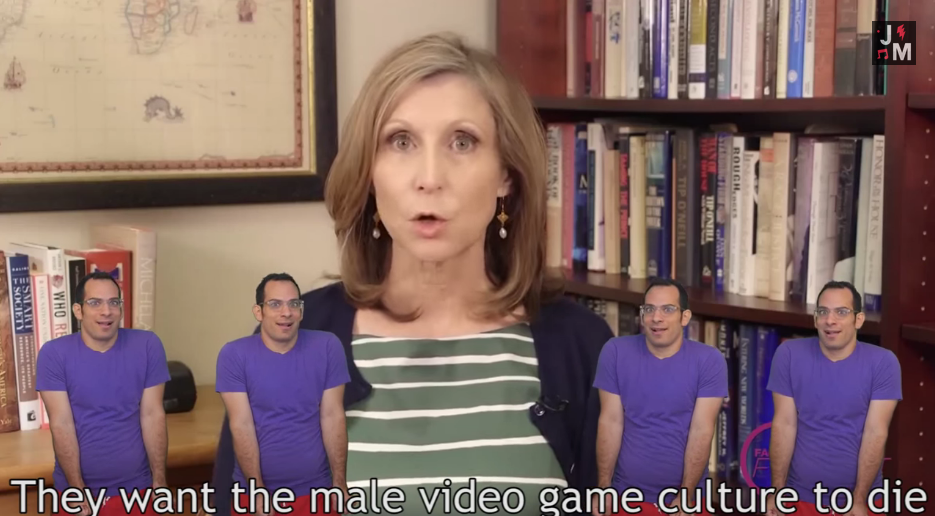 Renown feminist media critic Anita Sarkeesian (of Feminist Frequency fame) has been implicated to the support and co-creation of a musical “rebuttal” that lampoons criticism of her Tropes vs Women in Video Games series.

The mockery was directly aimed at a video published by the Factual Feminist, Dr. Christina H. Sommers, which actively scrutinizes Sarkeesian’s findings.

Sommers’ video has been seen by many as an interesting perspective in the subject of sexism in video games, and cites various studies to back her claims. Her content and words on social media platform Twitter have been embraced as a strong counterpoint to Sarkeesian’s video series thus far.

Instead of being met with discussion or civil debate, Sarkeesian and her partner Jonathan McIntosh allegedly helped musician Jonathan Mann curate a puerile video that autotuned Sommers’ voice against background music. Throughout the video, Mann can be seen dancing in an overlay across Sommers’ original video.

In a recent post on his Patreon page, Mann says that he not only met Sarkeesian and McIntosh at this year’s XOXO Festival, but that the duo actually contributed to the video by “giving feedback”.

Sarkeesian even went so far as to “help a lot with editing and subtitles”.

“So, I had the pleasure of meeting and hanging out with Anita Sarkeesian last weekend at XOXO. I had met her producer and partner-in-video-making Jonathan McIntosh last December at a YouTube event in LA. What lovely people.

“I’ve been fans of theirs for years, so it was great to get to know them a bit.

“Watching Christina Sommers, the first thing that struck me about that video was that the audio was very clean – perfect for auto-tuning.

“I ran the idea by Anita and Jonathan and they seemed to be into it. So I set out to take apart her argument, point by point, in a song. They gave me some feedback on early versions, and then Anita actually helped a lot with editing the subtitles! I’m bad at details!”

Shortly after Mann’s video went live, Anita Sarkeesian Tweeted it out onto her feed, significantly boosting the signal across her 140-thousand-plus followers.

Here @songadaymann offers a funny autotuned rebuttal to the ludicrous claim that there is no sexism in video games: http://t.co/uigyxHXkws

While no concrete links of Sarkeesian’s and McIntosh’ involvement in the video have been made, it’s easy to see how the content could benefit their cause, and suspicion is quite high.

This event is the second occurrence to implicate Sarkeesian in objectionable actions. Known YouTube personality and critic of feminism Thunderf00t has recently been suspended on Twitter, and according to him, Sarkeesian may have used her considerable standing to make it happen.

Sarkeesian has won over many big names in the entertainment industry–from games journalists to Joss Whedon of Avengers and Firefly fame–and as a result she’s become an influential voice and cultural force within the media.

Over the past few weeks the Internet has seen sensationalist content strewn throughout the media that consistently insults gamers and proponents of GamerGate, but this information points to a very valid sense of irony.

It may serve as a glaring example to the blatant hypocrisy of the purported “Social Justice Warrior” cause–i.e. mocking and taunting others in the name of “equal rights”, gaining attention, or accruing monetization through “clickbait” reporting.

This has proven to be yet another interesting development in the ongoing paradigm shift in gaming culture brought upon by GamerGate. It’ll further be interesting to see if this apparent collusion to smear constructed criticism will affect Anita Sarkeesian’s following, and if it’ll have any ramifications on her credibility as a critic of video games and its shifting culture.