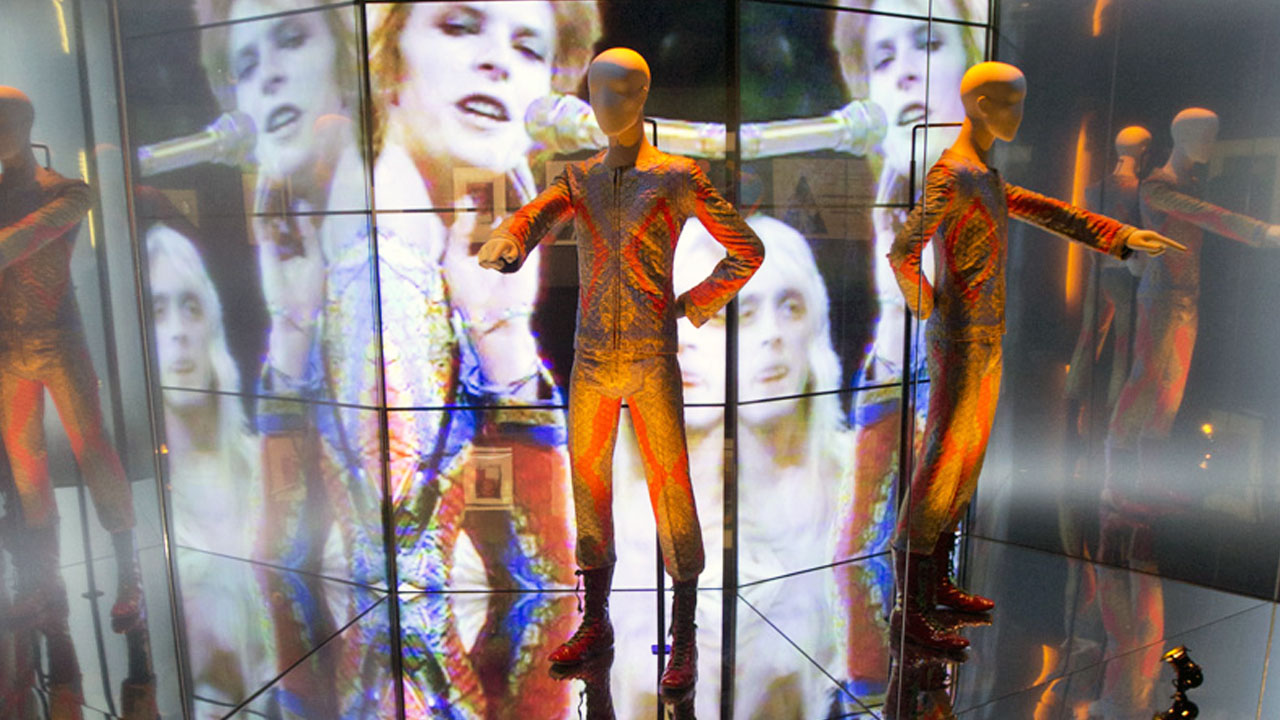 It’s a perfect final week of Summer on Chicago Ave. With the right balance of humid heat and cooling breeze, locals are crowding city streets and parks for that last chance of T-shirt-and-shorts freedom. What better time to host the “David Bowie Is” exhibit’s USA debut at Chicago’s Museum of Contemporary Art, where visitors will be fully immersed in David Bowie’s archive of over 50 years of original costumes, photography, set designs, album artwork, and rare performance material.

The exhibit itself is a chronological retrospective of how Bowie influenced the reinvention of musical and visual expression, challenging the essence of pop culture throughout the decades.  From early childhood upbringings, his early influences & beginning projects, to venturing across every phase of his artistic rebellion, ‘Is’ showcases objects and recordings you can experience both visually and audibly.

Here’s a sneak peek of ‘David Bowie Is’, along with a brief chat with Robert Genereux, Director of the guidePORT system at Sennheiser GmbH:

To compliment a vast amount of acoustic content, the curators of Victoria & Albert turned to Sennheiser for their guidePORT portable listening device. These devices are increasing in popularity for museums and other special events, but what makes guidePORT stand out is it’s ability to switch between multiple audio streams based on location. As visitors venture through Bowie’s life, they’re able to listen in to his early raw recordings and journal entries, snippets of pop culture references, interviews of artists who have influenced him. 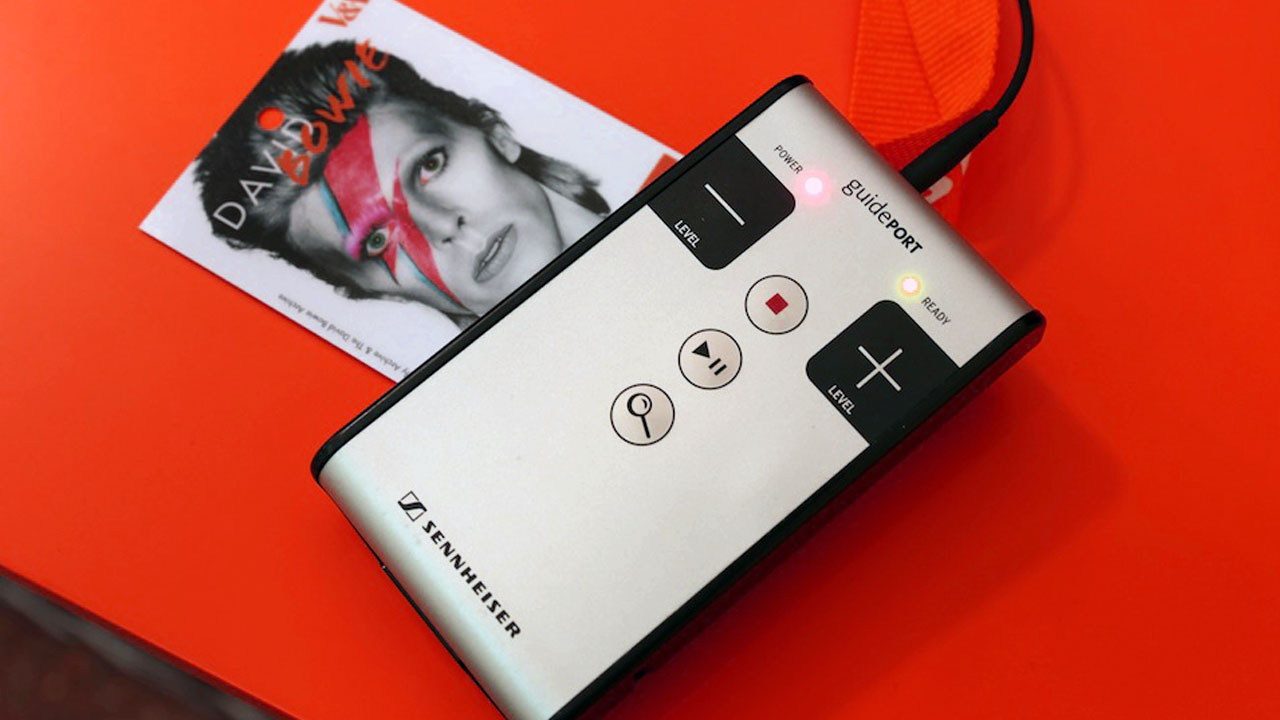 The guidePORT coordinates two different signals broadcasting from backstage. All audio content travels through unused portions of the upper 2.4 GHz range, while identifier beacons transmitting at low outputs are placed at key points throughout the exhibit. These beacon boundaries can be sculpted to specific shapes, which allows a travelling exhibit like ‘Is’ to adapt to new museum spaces.

As the guidePORT senses an identifier beacon, it switches its listening frequency to the appropriate audio stream.  Once you move towards another identifier beacon, your device crossfades into the next stream, allowing for a seamless experience. 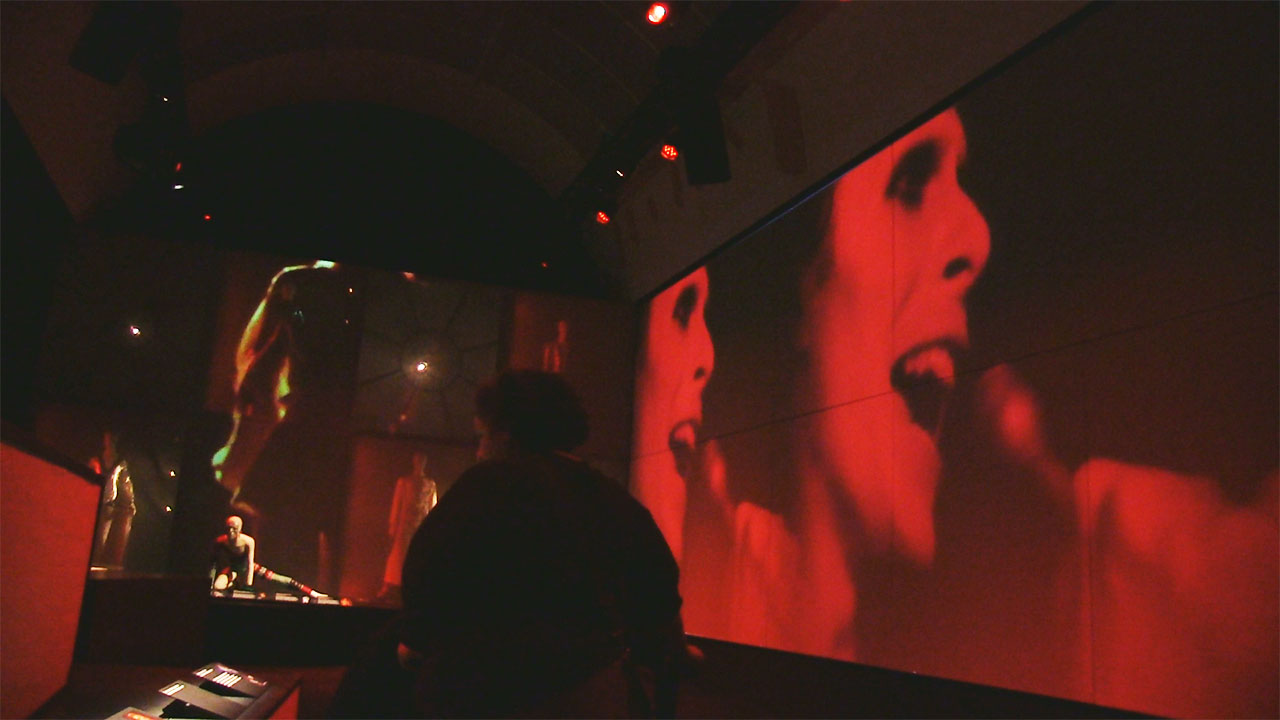 Sennheiser also showcased their new 3D Audio technologies in the finale portion of ‘Is’, where visitors remove their headphones to find themselves in the middle of a crowd surrounded by screaming fans, among a collage of live Bowie performances.  This experience is driven by Sennheiser’s Auro 3D upmix algorithms that extract as much information from original mono and stereo recordings, adding a new dimension to the listening experience without any additional effects.

Adding to the surround setup, height loudspeakers are included into the mix, which can help recreate the ‘room’ the original recording took place.  Rather than synthetic room reverb effects, the fidelity of center and left/right channels are preserved, placing visitors right in the crowd.

‘David Bowie Is’ is in-your-face, captivating, and hypnotizing affair that both die-hard fans and curious culture enthusiasts will enjoy.  While curators would not comment about future destinations after Chicago, they did hint that several other museums across the country are still very interested in showcasing the Starman’s life. If you’re ever nearby Chicago, this exciting event will be at the MCA until the first week of January 2015.