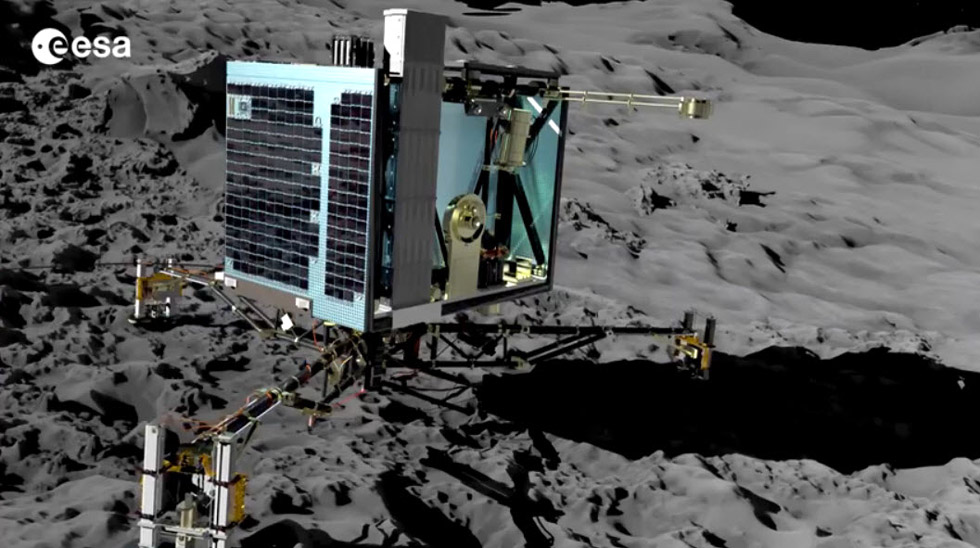 Philae is the name given to the Rosetta mission lander of the European Space Agency (ESA). It’s preparing to land on a comet 405 million kilometers from Earth. The tongue-twisting name of that comet is 67P/Churyumov–Gerasimenko.

Five potential landing sites had been suggested. The press was notified of the final choice in a briefing today in Paris. Site “J,” judged to be the least risky landing location, is on the smaller, 4 km wide lobe, of Comet 67P. This space voyager will have a visitor on November 11 if all goes as planned. The alternative site “C” would place the lander on the larger section of the comet which looks like two irregular pitted balls connected at the hip. The sites were chosen for having maximum daylight hours and a flat landing surface.

The 100 kg (220 pound) lander will be taking measurements while resting directly on the comet’s surface as it whizzes through space. Jean-Pierre Bibring, a lead lander scientist and principal investigator of the CIVA instrument (Comet nucleus Infrared and Visible Analyze) at the Institut d’Astrophysique Spatiale (IAS) in Orsay, France said: “We will make the first ever in situ analysis of a comet at this site, giving us an unparalleled insight into the composition, structure and evolution of a comet.” Seven micro cameras will take a 360 degree panorama of the landing site.

On August 6, after more than 10 years journeying in space, the lander arrived at the comet. Then, discussions and analysis of potential landing sites commenced. When Philae, 405 million kilometers from Earth, was able to hover within 30 km – less than 19 miles – above the comet a final decision could be made.

“After ten years, five months and four days travelling towards our destination, looping around the Sun five times and clocking up 6.4 billion kilometres [over 4 billion miles] we are delighted to announce finally ‘we are here’,” says Jean-Jacques Dordain, ESA’s Director General.

Just nine months ago, the hibernating spacecraft woke up and commenced reactivating the orbiter’s 11 science instruments and 10 instruments on Philae in preparation for making scientific observations. As a bonus, on its way to rendezvous with 67P/Churyumov–Gerasimenko, the space probe was able to come close enough to asteroids Šteins and Lutetia to get never-before-possible views of the space junk and gather science data about them as well. At its destination, Philae will attempt to send and detect radio waves through the comet’s interior to learn more about its internal structure. Scientists hope to glean information about the comet’s make up and activity.

For a year, Rosetta will hang out with the comet on its elliptical 6.5 year obit swinging around the Sun as it heads back out towards the planet Jupiter. They will pass between the orbits of Mars and Earth as they fly by at 55,000 kilometers or 34,175 miles per hour. Hang on to your hat.

Created in 1975, ESA’s mission is to “ensure that investment in space delivers benefits to the citizens of Europe and the world.” The ESA is made up of twenty states, most of which are members of the EU. It works with cooperative agreements with non-member states and Canada. NASA also contributed to the Rosetta mission. Here is also an animated version of the landing, via YouTube