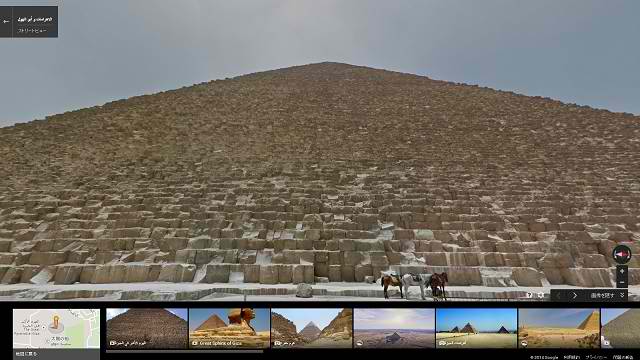 The Pyramids of Giza has long been considered as a symbol of awe and wonder at the marvels of the ancient world. Especially today, because the pyramids are now open to the internet realm thanks to Google Street View.

Google had just announced that its Google Maps’ Street View option now provides stunning updated and up close images of Egypt’s most famous ancient landmark. The pyramids of Khafre, Menkaure and Khufu are on the head list, but there will be other included sites such as the Abu Mena, Saladin’s citadel and the Sphinx monument. Each of the sites around the landmark will be available using Street View’s panoramic and standard gallery modes.

Now, we all know how Google maps out the area for Street View using its fleet of cars. Around the site of the Egyptian pyramids however, there are no paved roads, so the Street View team had to track the area on foot. One can just imagine the work required to do such task given the temperature extremes and the needed distance to cover without the use of vehicles. Nevertheless, it was completed, and now we enjoy the fruits of their labor at the comfort of our own home.

The Egyptian locals are hoping that tourism would again bloom with this new project. The uprisings and unrest that plagued the country for several years already has put a serious blow on its tourism industry. In fact, the number of tourists going to the pyramids has eventually dropped to about 70% just last year. On a brighter note though, the lesser number of tourists might have actually helped Google finish the work in a much shorter time.

The only thing missing now is to get Street View to turn the dial back at the pyramids with its time machine option. Or at least we hope that it can do so.