Instead of implants under the skin that turned Steve Austin into the $6 million man, the Soft Exosuit fits outside the user’s body. It boosts a soldier’s ability to walk longer distances carrying heavy gear with less fatigue and improved resistance to injury.

Exosuits are a new class of applications for soft robotics. Soft, elastic sensors in an adjustable suit made of nylon, polyester, and spandex provide well-timed bursts of power intended to reduce the energy a soldier uses to walk. The suit mimics the action of the wearer’s leg muscles and tendons. Sensors embedded in the insoles of a boot send a signal to a computer processor in an actuator box on a backpack or waist belt. Cables transmit force to the joints. The system is continuously monitoring various data signals, including the suit tension, the position of the wearer, be they walking, stooping, or crawling. All the components, including a battery that gives out 50 watts of power for 4 hours, weigh about 13 pounds. 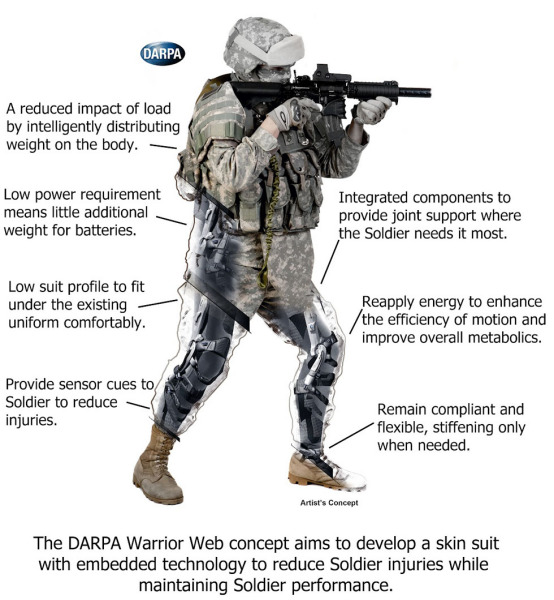 The Warrior Web  says troops patrolling for long periods in rugged, hilly terrain usually are carrying 100 or more pounds of equipment. Musculoskeletal injuries can occur while bending, crawling or running, especially to ankles, knees and lumbar spine. Fatigue is common. The suit worn beneath the uniform promises to enhance strength and endurance of the wearer.

In the lab, scientists monitor the biomechanics and physiological implications from people interacting with these types of machines. This exosuit differs from others in that it is soft, not rigid as in the past. 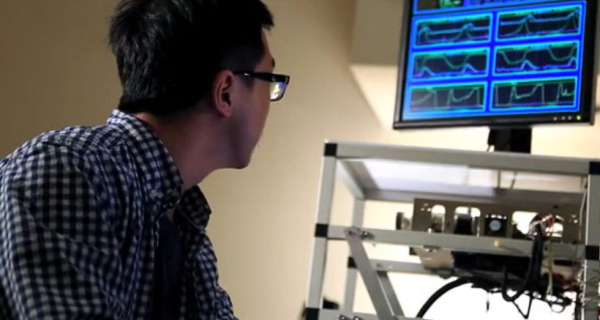 Robot suit and its human wearer are monitored in the laboratory

Conor Walsh is Assistant Professor of Mechanical and Biomedical Engineering at the Harvard School of Engineering and Applied Sciences. Walsh is also a Core Faculty Member at the Wyss Institute for Biologically Inspired Engineering at Harvard. Additionally, he founded the Harvard Biodesign Lab. He illustrates the operating principle of the robotic suit with this explanation: If you have a person in a swing, and “you start them swinging, then you just have to give a little tap at the right time, and the swing will keep moving.” Similarly, if a person begins walking, swinging their legs, the sensors give a boast of energy to the participating muscles. 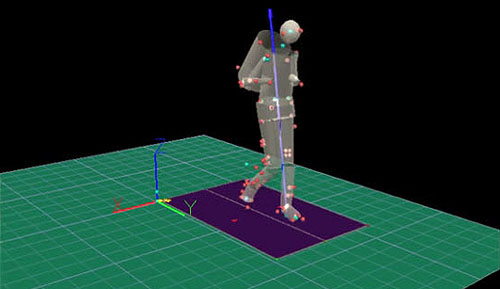 Mapping coordinates for the Exosuit

Team Leader Walsh is working with Wyss Institute faculty Robert Wood, Yong-Lae Park, and George Whitesides; Harvard School of Engineering and Applied Sciences; Harvard University graduate students and postdoctoral fellows; Terry Ellis and Ken Holt of Boston University’s College of Health and Rehabilitation Sciences; and Sang-bae Kim of MIT. New Balance known best for their Made in America athletic shoes provides expertise in textile and apparel innovation.
The military isn’t the only segment of the population that may profit from the wearable robotic suit. Alternative versions of the suit could eventually assist those with limited mobility, such as individuals who have suffered a stroke or have cerebral palsy.