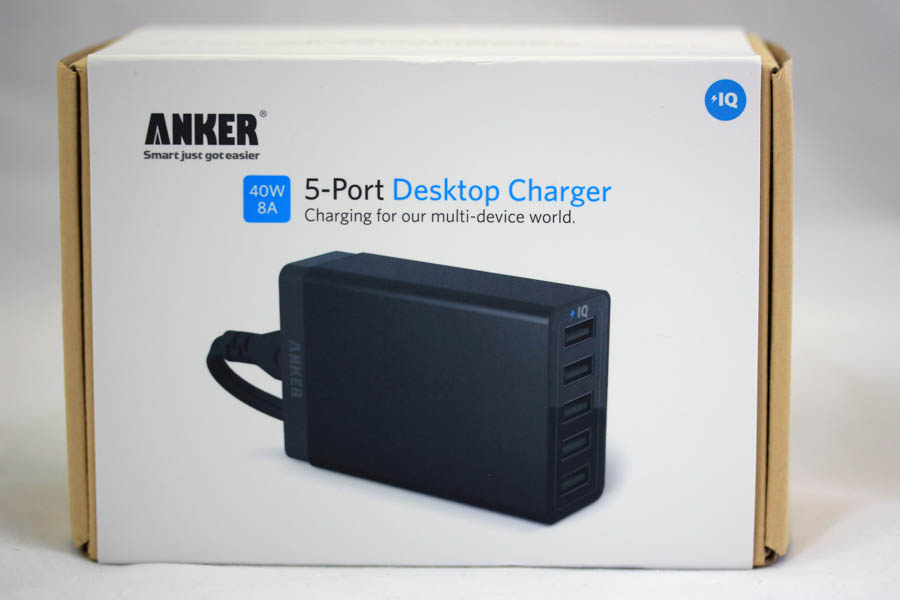 How many devices do you have that need power or to be charged by USB?  Likely there are a handful of devices, and plugged into a separate USB power adapter for each one.  Anker aims to help cut down your power adapter clutter with its 40W (8A) 5-port family sized USB charger with PowerIQ™.

The 5-port charger is a powerful one with up to 40 watts and 8 amps able to be spread over the ports.  Anker employs its PowerIQ technology, which is a smart circuit that will adjust the amperage to the device’s needs instead of being a set output.  This will allow you to charge your devices that can draw 2.1 amps to charge their batteries faster than a mismatched charger would allow.  This gives the benefit of not having to check the charger you are using each time to make sure you are going to charge as fast as you can.

The power cord is also included and has a hook and loop cord wrap to help keep your clutter to a minimum.

The design is very simple, a non grounded power cord plugs into the power brick that has five USB ports to the front.  There are no power indicators like an led, since your device should indicate to you that it is charging.

Using a USB voltmeter the voltage and amperage were checked when charging devices.  The 5v output was nice and stable, ranging from 5.05v to 5.07v while charging a HTC One M7.  In comparison the output voltage from a USB 3.0 port on my MSI GT60 notebook came in slightly lower than 5v at 4.91v to 4.94v when charging the same HTC One M7.  The M7 was drawing the same amperage from both devices, which was 0.46a.  The M7 is able to draw more than this with a custom kernel that has fast charging enabled, but I currently don’t have that in my ROM.  Devices that will be able to draw higher amperage will charge much faster like the Samsung Galaxy S5, iPad, iPhones, and the HTC One M8.  The M7 charged at the same speed or faster than it usually had when using the wall wart charger that was originally included with the phone, performing as expected.

Anker’s chart shows how much time savings is possible when charging with PowerIQ enabled chargers.

This is a good deal since you may pay up to $20 on a single usb port charger at your local electronics store.  Having a charger that can handle up to five devices and charge all of them with the proper amperage is much better than having five separate wall warts on a power strip.

The customer support Anker provides is hands down some of the best I have experienced.  Initially I was using one of these with only one device plugged in, when I attempted to plug something else in I learned that only two of the ports were active.  I went to Anker’s website and filled out an RMA form, I was contacted the next business day via e-mail requesting that I provide them the serial number of the charger so they can track these issues.  They confirmed my address and shipped out another unit which I received two and a half days later.  They requested that I recycle the original charger appropriately.  It was pleasantly surprising that I didn’t have to ship anything and only had to make minimal contact to get fast service.

Is it worth it?

When the purchase will have a company that has good customer service and will stand behind its products I find that a big reason to pick something from that company.  It can take the place of five separate wall wart chargers, and being able to be placed where you want it with the detachable cable makes it that much better.  I personally have routed this into my nightstand’s drawer next to my bed, allowing me to charge items out of the way.  Seeing this is priced at an affordable $25.99 I think it would make a wise purchase for your all of your devices.