The street market on Jardine’s Bazaar, a small side street that juts off from Hennessy Road in Hong Kong’s Causeway Bay district, is lively — but it lacks the Cantonese cacophony one might expect from the city.

But this street market — located behind one of Apple’s (NASDAQ: APPL) flagship stores in Hong Kong — is not selling the usual street market fare of meat, produce, or trinkets. Instead, vendors are hawking the iPhone 6 to Chinese buyers eager to scoop one up before it comes out in Mainland China.

As such, police take a keen interest in the vendors on the street. On a Tuesday afternoon police were present, but as re-sale of one’s goods to another isn’t illegal they were more interested in ensuring that the sellers didn’t clutter the already crowded streets as the densely packed metropolis has strict laws about hawkers setting up shop on the sidewalk. 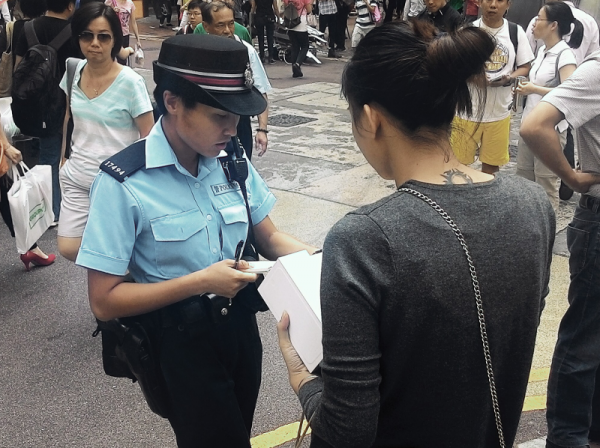 A police officer questions a women selling iPhone 6 smartphones outside an Apple store in Hong Kong.

But while the police presence may have allowed vendors to carry around bags of the expensive smartphones in public without fear of petty theft, it did turn the street vendors into sheepish reprobates when officers were nearby doing their rounds. When approached with the request for a quick interview, many vendors shook their head pointing to nearby officers.

One vendor, who spoke to VR World, but requested not to be identified, explained that the sole reason for the street resale economy was because Apple only allows those with a Hong Kong ID or passport to pre-order and purchase iPhones in Hong Kong.

The customers, the vendor explained, were largely Mainland Chinese on shopping trips as well as rich businessmen that frequented the city. But he noted that these two groups were not exclusively his customers. He said that he had a number of orders from more ordinary people — farmers as he described them — looking to cash in on the iPhone 6 economic windfall that ordered dozens of phones in order to smuggle them across the porous border to the Mainland to resell them there.

This vendor said that since the launch of the iPhone 6, this has been his primary occupation. Every morning Apple releases a new batch of pre-orders, of which the vendor tries to snatch up as many as possible. He said, with the assistance of automated scripts, he is able to usually reserve a few hundred a day but is only able to usually pick up less than a dozen because of restrictions put in place by Apple store staff. 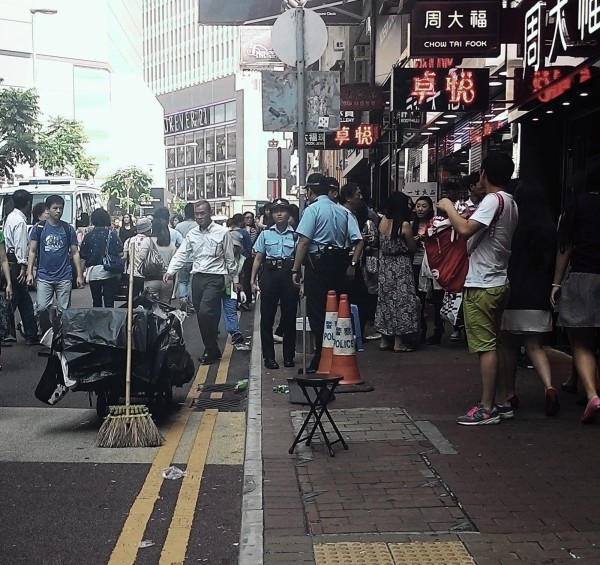 Police tell vendors to move along and not clutter the street.

As far as pricing goes, the vendor says his “markup price is like seafood.” It varies on the day, as the number of iPhone 6 units released per-day fluctuates.

While supply and demand might drive this market, the phenomenon of a price cartel controls it. The retail price for the iPhone 6 in Hong Kong starts at $720 ($5,588 HKD) for the base model and moves up to $823 ($6,388 HKD) for the Plus version, most prices for the Plus model lingered around the $7,000 HKD range while the base model was priced just north of $6,000 HKD. While out of earshot of police, negotiations were murmured back and forth in Mandarin as potential buyers tried to negotiate the best possible price.

But for many of these vendors, the sustainability of their iPhone economy may be shaky. Apple announced earlier this week that it’s planning to launch the iPhone 6 on October 17 in China — giving the customers of the vendors on Jardine’s Bazaar a place to shop closer to home.