Remember when NFC was cool? It still is. With the NFC-enabled BT540i Bluetooth headphones from KOSS, you can easily pair to a compatible device and enjoy surprisingly sweet sound quality with just a tap.

The BT540i is the latest in KOSS Corporation’s (KOSS) expansion of their “mobile” products line. Since 2012’s CES Show, KOSS has introduced many full-size, in-ear, and sport models that incorporate mobile device functionality, like many other consumer audio companies.

This circumaural Bluetooth model utilizes updated componentry and touts exceptional sound quality, while being very simple to use.

Here’s what you need to know:

With our NFC-ready Google Nexus 5 (LG), unboxing literally look less than a minute. 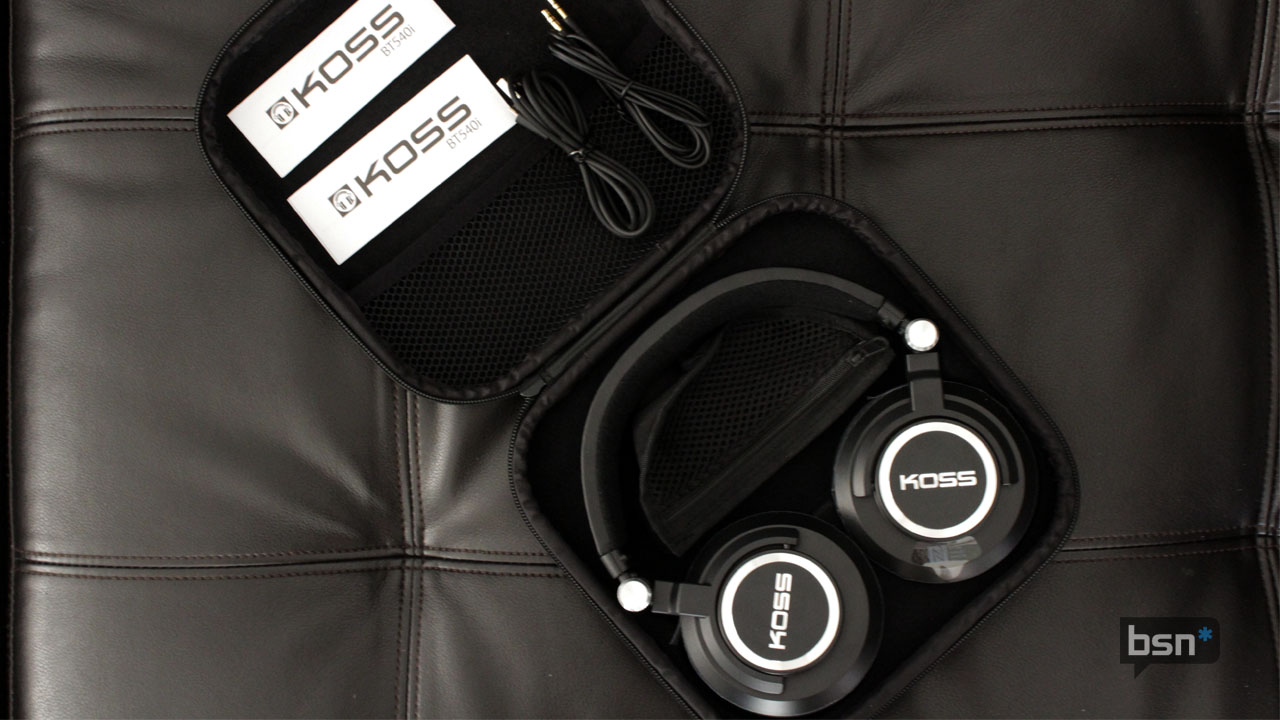 Also included are a micro-USB charging cable, 4-foot 3.5mm cable for corded listening, warranty card, and instructions in both English & Russian (for some reason), all inside of a stylish soft-shell case. 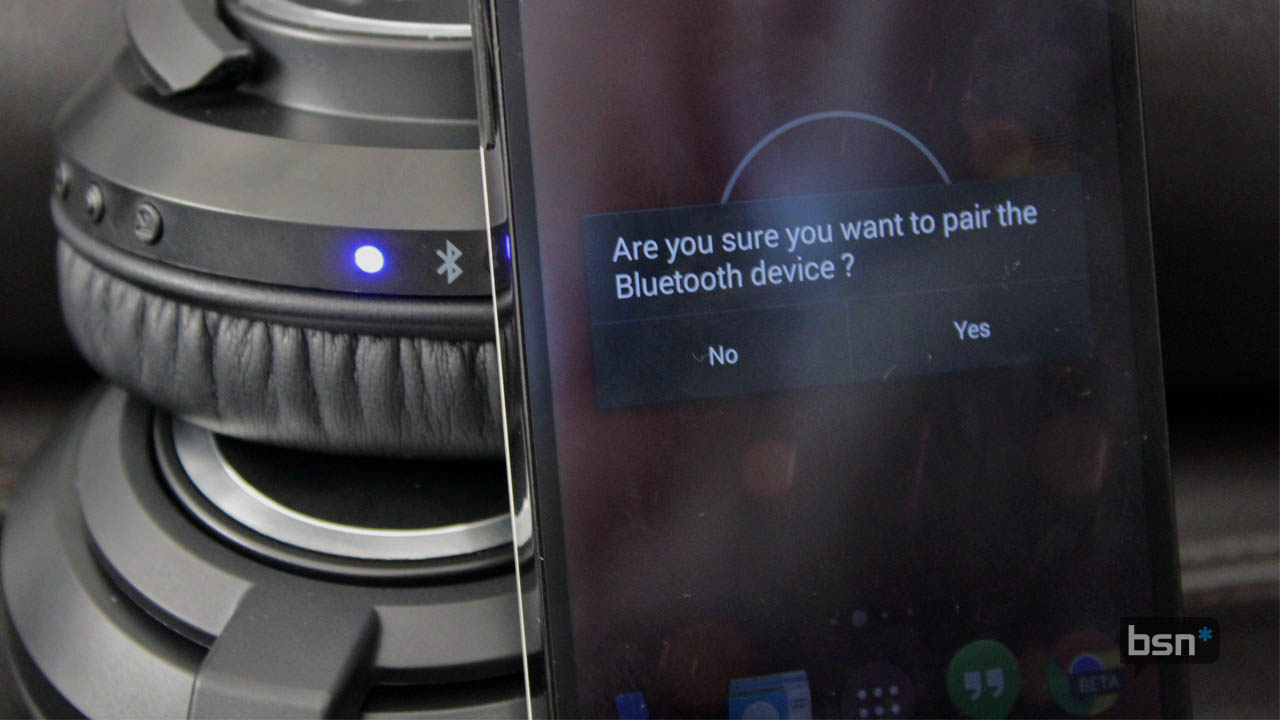 After turning on the BT540i and tapping my phone to the right earcup’s edge, the Nexus 5 immediately enabled Bluetooth and synced up. No diving into menus, scanning and pairing – Done.

With products like our iPad Mini, which doesn’t support NFC, we had to traditionally enable the iPad’s radio, turn the headphones into “discovery” mode (sliding the power button for 4 seconds), and sync the BT540i once it shows up on iOS.

With it’s high-density plastic supported by an aluminum frame, fully rotating/folding ear cups, soft foam leather cushioning, and clothed headband, the BT540i delivers the core elements most important to listeners. Weighing in at 8.2 oz, they’re not as light as a pair of Bose Soundlinks but definitely less straining than what’s offered from other consumer models. 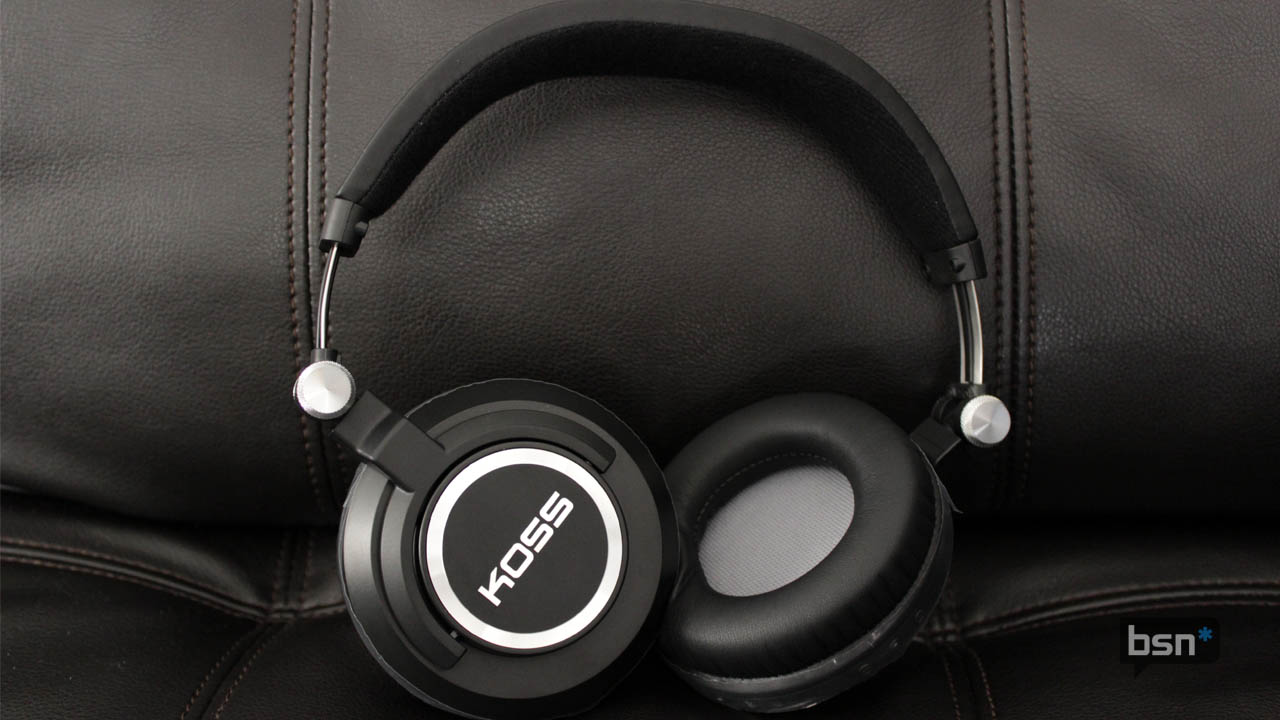 The headband and cups are snug enough to offer good passive isolation, while soft enough for long hours of wear. The cups create a solid seal around our ears, and there is very little bleed that could disturb people nearby, even in quiet environments. Because the hinges and cups can rotate on multiple axis, the BT540i can accommodate for any head shape. 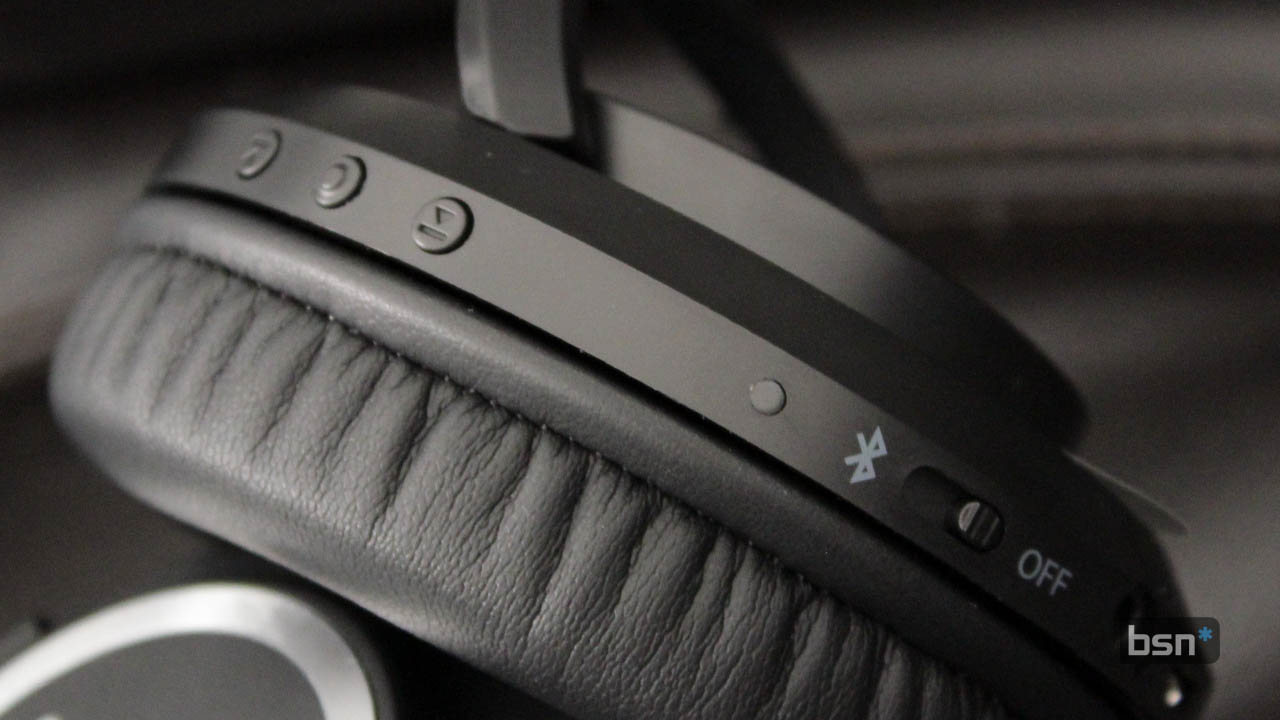 All of the controls are ergonomically placed on right ear cup, with the volume, transport, and power keys logically ordered around the rim. The buttons are easy to press, with audible feedback either from the headphones or from your mobile device’s OS. Flipping the power switch illuminates an LED indicator light that shows sync status and battery level.

Using the same framework as their PRODJ200, these headphones are covered in matte black with metallic, grooved barrel hinges and KOSS emblems as accents. The overall design is minimalist at best, and while enthusiasts will argue that what really matters is the componentry inside (it does), at a certain point there needs to be a sense of branding.

There are many, many black headphones on the market, and Koss’ entire over-ear headphone line pretty much stays within this box. Why not add a small trim of color? Bring back the subtle blue tones of the PortaPro, which till this day is the pair that most consumers associate with the brand.

To better illustrate the technology encased inside the BT540i, check out this quick video:

Koss introduced their new PLX40 driver elements inside, producing a slightly colored profile across it’s 100 dB SPL & 38-Ohm circuitry. Because of an overall improvement in power efficiency, there is little to no noticeable noise floor in both Bluetooth and hardwired modes. 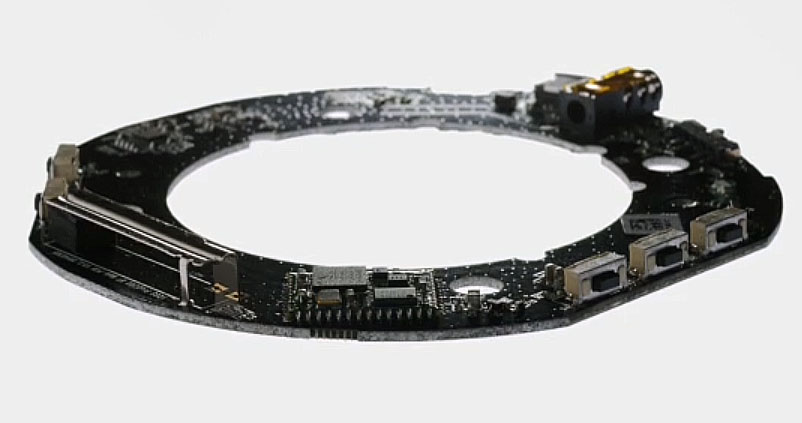 The main reason why they chose to use the PRODJ200 frame is because it allowed enough space to fit the wireless and battery components inside, without having to compromise driver size. The diameter of a driver element is a crucial for natural signal reproduction, and anything smaller than 40mm usually results in a more colored profile to compensate.

Listening to an uncompressed source via the 3.5mm connector does reveal a slight boost in the lower frequency bands, however this bump is potentially beneficial for information loss during Bluetooth encoding/decoding. Regardless, what you hear is a smoothed out listening experience for enjoying music on the go, no matter how you connect.

Every genre had a consistently pleasing listening experience across all of our devices, both over Bluetooth and corded listening. Because the BT540i seems to have a relatively flat frequency response, it has enough headroom for those who want to EQ their experience device-end.

For cord-free listening, these phones utilize an aptX codec over Bluetooth 3.0, which is a solid wireless delivery format. With most current devices moving onto Bluetooth’s 4.0, it’s surprising that headphones haven’t moved onto this SoC by now, which is not only more power-efficient, but has lower production costs too.

According to our recent interview with Koss, the advantages are too slim for audio products, so they stuck to the current high-quality standard.

The internal battery is advertised to last 8 hours, but we’ve consistently tested it to be closer to 6.5 hours of continuous listening time at moderate, comfortable volumes. That’s not bad, considering you may only need to charge 2-3 times a week to handle your daily commute.

Charging the BT540i isn’t quick, but isn’t slow either. From an empty tank, these stereophones are ready to go in about 90-120 minutes via a micro-USB connector. Trying AC adapters (not included) of different outputs makes little difference for charging speed and holding life, but for headphones you should stick to a plug of 1A or less for longevity.

Like many of its competitors, Koss is aiming its sights on mobile devices. So how does the BT540i perform on current mobile platforms? 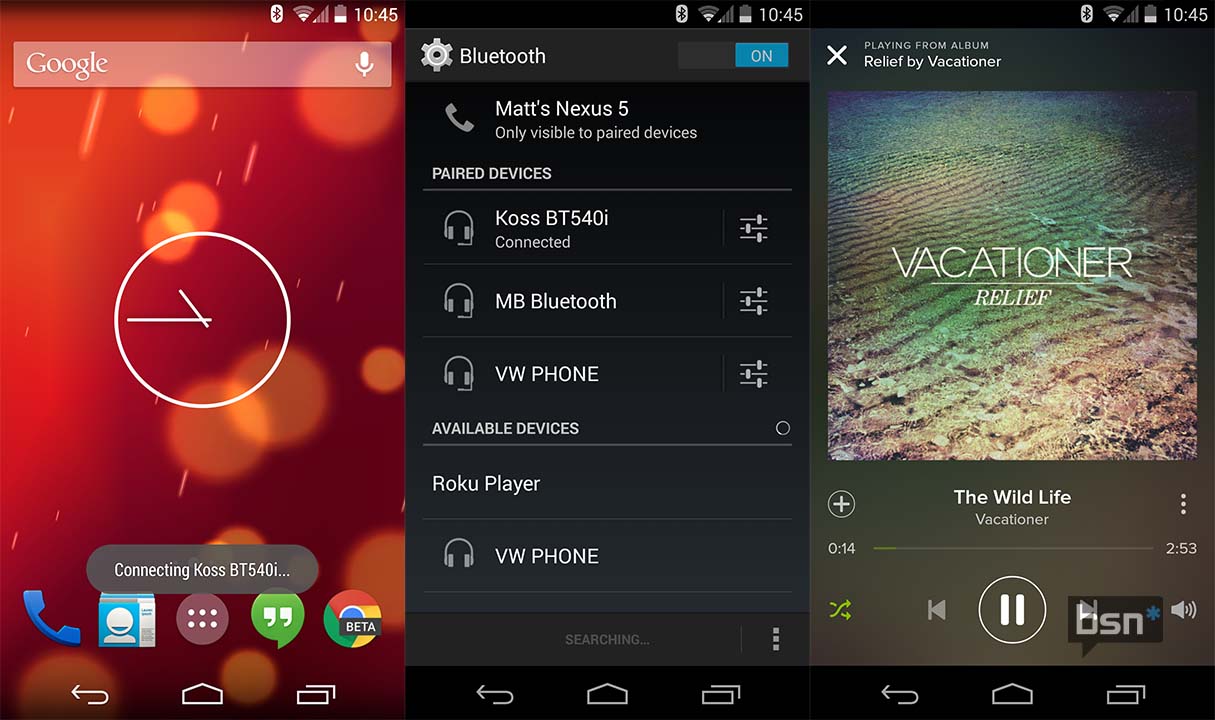 Android 4.4 (KitKat) – On the Nexus 5, long pressing on the play/select button only activates a call-only voice dialer on stock Android. While this may differ on Samsung or HTC builds, it would be nice if this could engage a Google Now prompt for more robust hands-free control.

The noise-cancelling mics seem aggressively tuned, so we’ve found the need to speak at higher than normal volumes during calls so that our speech wasn’t garbled or phased out – this was the same on any OS.

Pressing the play button immediately starts your last track played track on Google Play Music. Apps like Spotify can override this, which is how I jumped from an NFC tap straight into my music in seconds. Transport and volume controls are free from quirks. 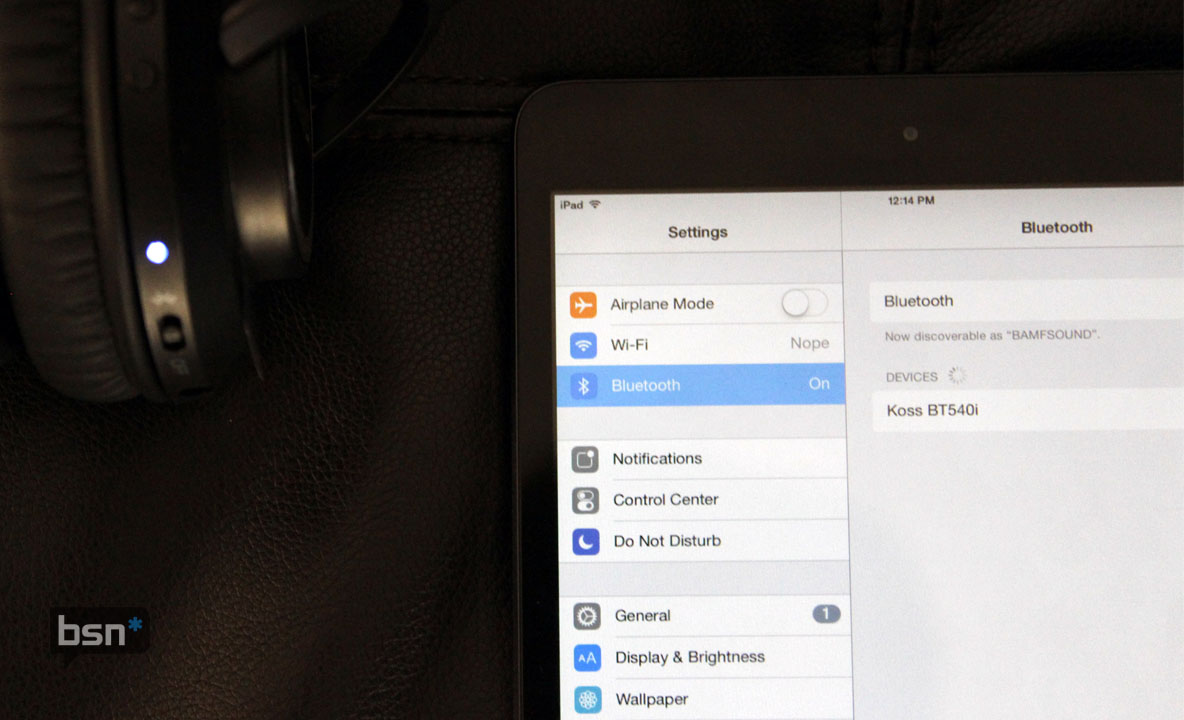 While the iPhone 6 does have a NFC chip, it’s currently designed only for the Apple Pay system, which is a shame since Apple has locked itself out of a world of simple device compatibility.

Windows 8 Mobile – For some reason, we had a difficult time pairing the BT540i with a Surface Pro. Both devices recognize each other, being a standard Bluetooth connection, yet they refused to pair every time. At the time of this review, we didn’t have another W8 device to try, so hopefully this is an isolated issue.

Last week, we interviewed Michael J Koss, CEO & President of Koss Corp, about these stereophones and how the company plans will stay fresh for music lovers for the years ahead.

Even though Koss adapted to current market trends for consumer audio, the BT540i would have made a better smash hit if it debuted a year before. As overseas production increased over the past couple years, the rise in availability of low-cost consumer headphones have skyrocketed too. 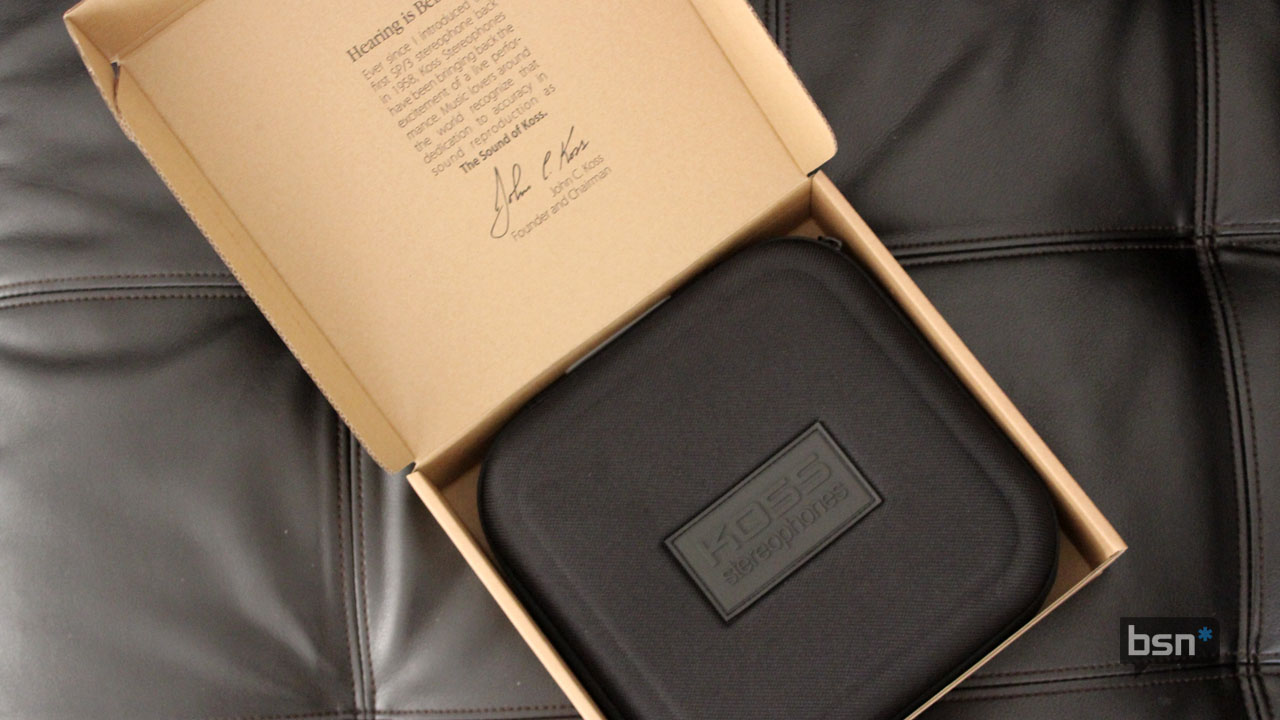 The BT540i is well built, acoustically pleasing, and very simple to use – especially at its price point of $199 MSRP. If there’s anything negative to say, it’s the fact that Koss should have released it sooner.

Overall, we’re very pleased with this pair, and will continue to be an everyday carry for some of our editors. The BT540i is a good indication of where Koss is heading, but they’ll need to continuously stay with or ahead of the curve, no matter how dedicated their loyal fans have been over the decades.