The people at Futuremark have been quietly keeping their new PCMark for Android benchmark fairly quiet. They technically did already announce the benchmark, without any NDAs, but they haven’t quite fully launched the benchmark to the public, only making it available to select press for a preview. We’ve had an opportunity to test this new benchmark and take a look at exactly what it tests and how it tests the devices.

The first and foremost thing you need to know about PCMark is that it is not 3DMark, which is already available for Android. 3DMark’s goal is to inform you purely about the device’s performance in 3D applications, with a specific focus on 3D gaming. It does not take into account daily usage or what kinds of applications you would be using on your phone throughout the day. During it’s testing PCMark for Android tests web browsing, video playback, writing (texting), and photo editing. Considering most people’s phone usage, these four tests would very likely represent a vast majority of most users’ usage of their phones unless they constantly keep Facebook and Twitter open all day. 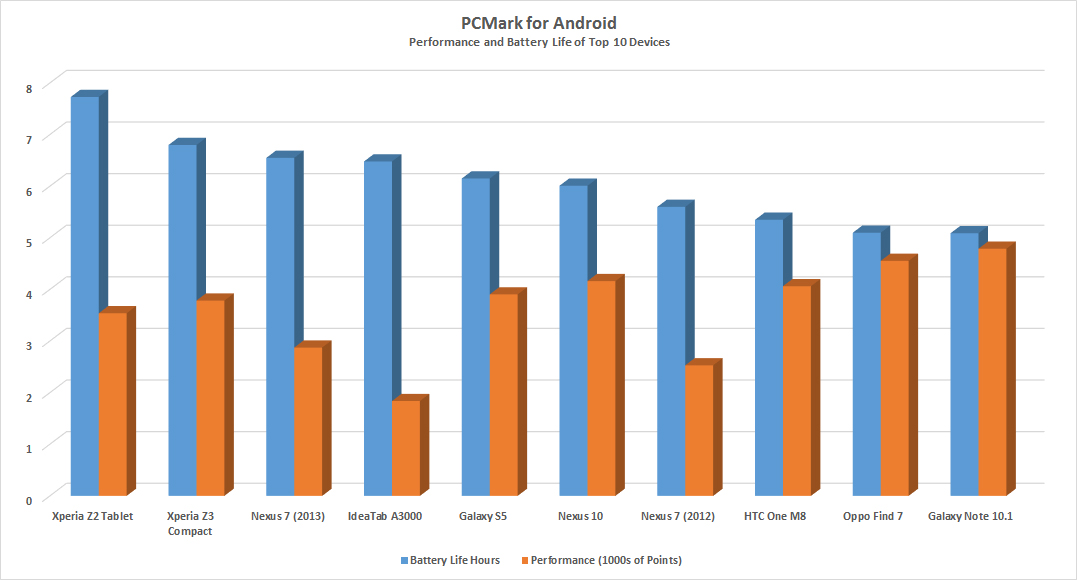 If you’d like to see the fastest Android devices using PCMark for Android, head on over to this page. And if you want to see which devices have the best battery life, check out this page. Judging from the results on those pages, neither of the top devices are surprising since Nvidia has some very powerful processors, but their battery life isn’t necessarily the best. The Tegra 4 powered SHIELD Portable is capable of being the #1 because it does not have to downclock at all due to having active cooling, allowing it to run full throttle all the time. Additionally, the Xperia Z products seem to have the best battery life of the bunch, however, the full line Xperia Z3 series of tablets and smartphones haven’t been tested for battery life yet, so there’s a good chance they will capture the top. But you can already see that the Xperia Z3 Compact retains its reputation as the best battery life smartphone on the market.

We haven’t been given an exact date of when PCMark for Android will become public, but it may come as soon as next week and by then there’s a very good chance we will be able to test it out on the new Nexus 9 (with 64-bit Tegra K1) and Nexus 6 (rumored to have Snapdragon 805). It will also be interesting to see how the battery life of devices like the Nexus 5 will chance with the Android L release as well.