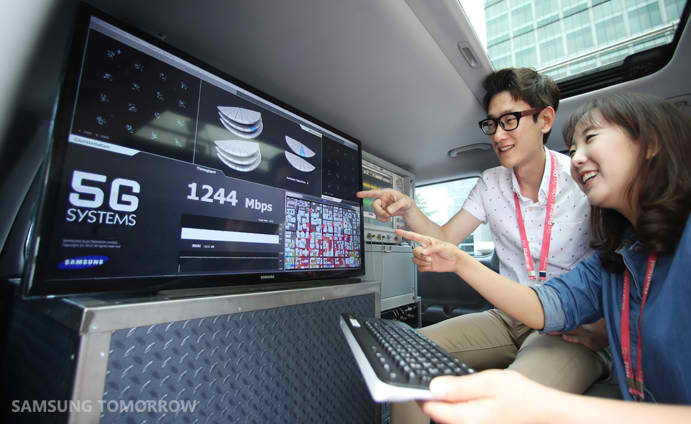 Samsung (KRX: 005930) has just announced a new milestone achievement in telecommunications networking technology. Demonstrating a record data transfer speed of 7.5 Gbps (940 MB/s), it has once again broken ground for the industry, and has set the path for one of the standards of upcoming new 5G mobile networks.

The reported data transfer rate was primarily achieved through the use of Hybrid Adaptive Array Technology, which is described as a system that uses millimeter wave frequency bands to use higher frequencies at greater distances. More than just raw speeds however, the important point set by the new record was that it was also achieved with standard outdoor conditions, instead of controlled environments such as in laboratories and indoor testing grounds.The choice to conduct the test this way may prove to be very vital in showing the overall reliability of a network that uses the same ultra-high speed data transfer rates. Instead of simply crunching theoretical values for optimized speed rates, the tests can show results as they are, and thus users would have a better idea on the network’s actual stability and usability.

Another recent record test by Samsung was its successful stable data transmission with a rate of 1.2 Gbps (150 MB/s) over a mobile connection, which was travelling at over 100km/h. The test was conducted on a professional race track, with the test vehicle speeding around its total distance of 4.35km.

Samsung had achieved a similar milestone way back in May 2013. It was the first company to have ever achieved a data transfer speed of 1Gbps using a 28Ghz 5G network. This comparatively means that the recent achievement had actually marked a seven-fold improvement over the previous milestone after just a single year.

South Korean telecom networks are known to be one of the fastest in the world, and the recent achievement by the South Korean tech giant might just make it even faster. With the general implementation of 5G networks coming nearer and nearer as the year 2020 approaches, we might just experience more or less the same zooming data transfer rates on our local networks very soon.