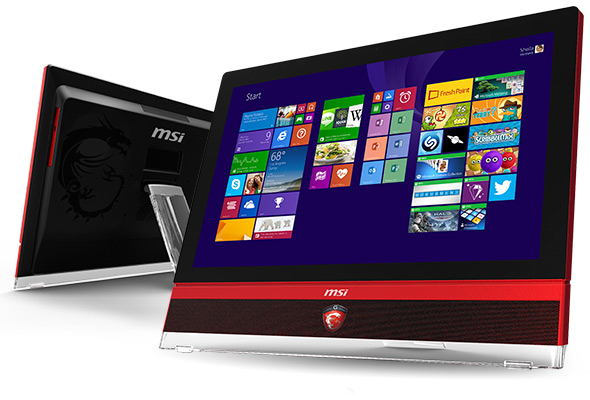 While MSI is known for its motherboards and video cards, the vendor also dabbles in other segments, which have of late included the Nightblade barebones machine and its line of gaming notebooks. Today, the hardware vendor is launching two new Windows 8.1-based AIO desktops that are among the first in the world to feature Nvidia’s (NASDAQ:NVDA) latest GTX 980M And GTX 970M GPUs.

The AG270 2QE and AG270 2QC feature a 27-inch anti-glare matte display with Anti-Flicker and Less Blue Light technology, which MSI claims is useful in reducing strain during prolonged gaming sessions. MSI mentions that the technology stabilizes electrical current to prevent serious flickering that is seen in standard displays. The resolution on both monitors is 1920 x 1080, which is a bit of a letdown as QHD would have been much more enticing to gamers. For what it’s worth, the panels offer 10-point multi-touch.

In terms of hardware configurations, both products come with an Intel Core i7 CPU along with up to 16 GB DDR3L RAM, along with the choice of either the GTX 980M (on the AG270 2QE) or the GTX 970M (on the AG270 2QC). Launched earlier this month, Nvidia’s mobile solutions offer incredible efficiency while boasting the performance figures of desktop-class video cards. MSI mentions that the cards are ideal to run visually-intensive titles such as Far Cry 4, Assassins Creed: Unity, and EVOLVE.

Other features include Killer LAN, as well as the ability to configure three mSATA SSDs. Users can also choose to configure 3.5-inch drives and a Blu-Ray writer. In terms of connectivity, the desktops come with Wi-Fi 802.11ac, Bluetooth 4.0, four USB 3.0 ports, two USB 2.0 ports, an SD card reader, 2MP webcam, HDMI in and out along with VGA output. Being an AIO unit, MSI has added dual Yamaha 5W speakers for audio, with each speaker coming with a built-in full-range monomer, and an independent subwoofer monomer.

MSI hasn’t detailed pricing yet, but from what we’ve seen, based on the configuration, these models can start from $2100 and run up to $2700.