AMD (NYSE: AMD) is cutting the prices of its APUs in anticipation of the holiday shopping season and you might just be able to build a fast a great system on a budget this holiday season thanks to AMD.

The prices you see below are ‘suggested’ etail prices, meaning that you will very likely only see these prices in online stores and they could actually go lower. For example, an A10-7850K is going for $179.99 right now on Newegg, but since it appears the price cuts have not been made effective there yet, you should wait to buy that APU until they are. After all, AMD states that these are permanent price cuts, not a channel promotion or a temporary reduction like they did with their Radeon graphics cards last week. This price difference also shows us that AMD’s price cuts are fairly significant, seeing as the CPU is currently selling at $180 (already on sale) and will be cut almost an additional $40, which is significant.

In addition to the price cuts, through the end of October, people that buy any of AMD’s A10 APUs may select from one of three game titles – Murdered, Thief, or Sniper Elite 3, using the AMD rewards key code inside the product box. Alternatively, the key code may be redeemed to purchase Corel Aftershot Pro 2 for only $5. This promotion applies to the following AMD A10 APUs: 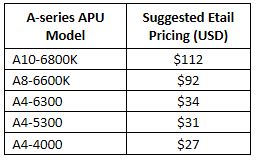 Overall, it looks like perhaps the best deal is the A10-6800K because you not only get the APU for $112, but you also get a free game thrown in as well. When you deduct the value of the game from the CPU, with say, Sniper Elite 3 which sells on Steam for $49 means that you are getting an A10-6800K for $62 if you remove the cost of the game. AMD has always been good about giving great values to consumers and it looks like this holiday season is going to be no different. If only they could also be competitive on the high-end and drive Intel’s prices downward.