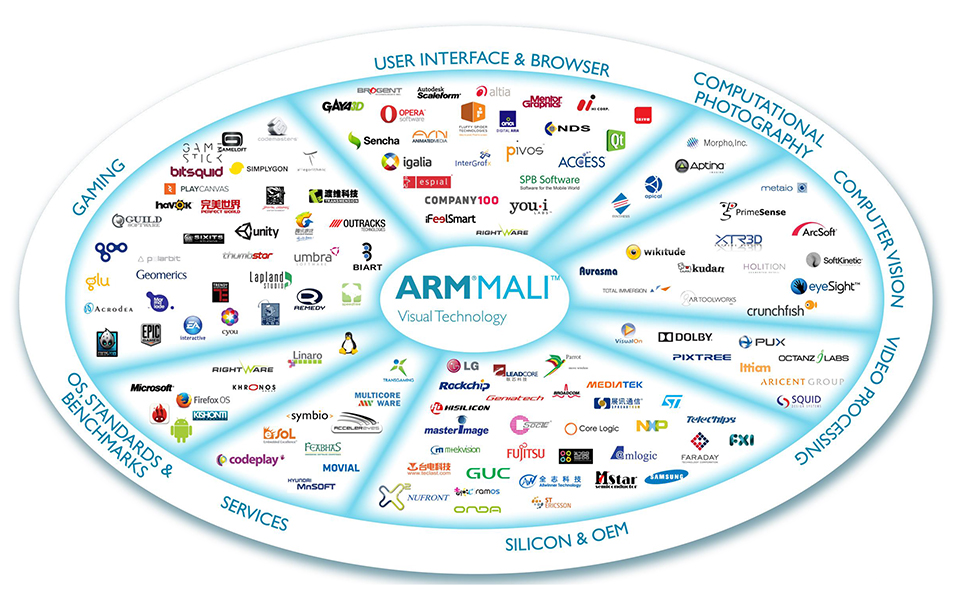 ARM today announced its latest graphics IP which includes three new GPUs as well as new video and display processors. With the introduction of ARM’s new Mali 8 series graphics IP, the company put a bigger focus on power efficiency and is looking to target products across a broad spectrum of capabilities and power envelopes. ARM’s announcement today introduces the Mali-T860, Mali-T830 and Mali-T820 GPUs as well as the Mali-V550 and Mali-DP550. 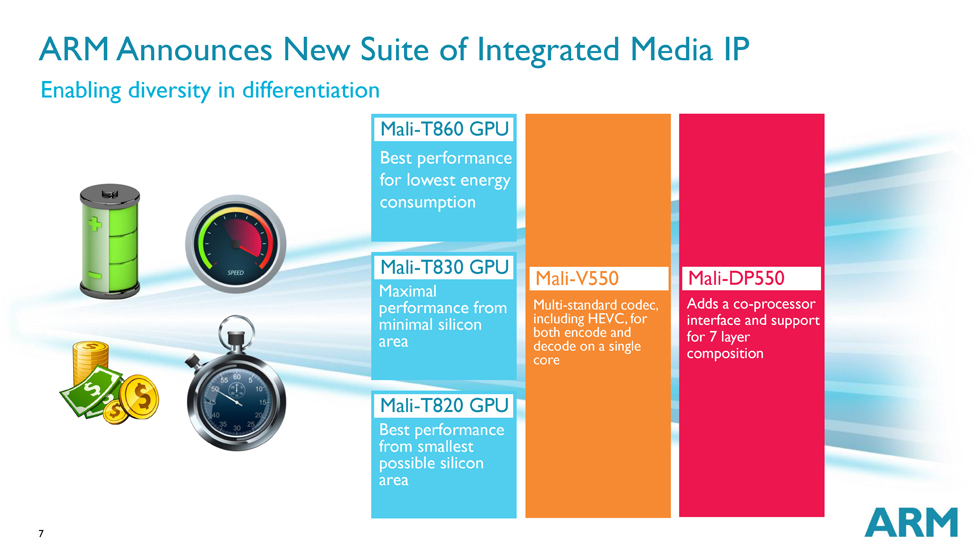 The new Mali graphics IP, as shown above, is part of ARM’s effort to make their graphics solutions even more efficient than their predecessors. This includes the ARM Mali-T800 series which is a successor to the currently available Mali-T700 series. The first of this graphics IP, the Mali-T800 series is designed to be more for the mid-range of devices as opposed to the high-end, however, ARM did state that the ARM Mali-T860 is still a high performance part. 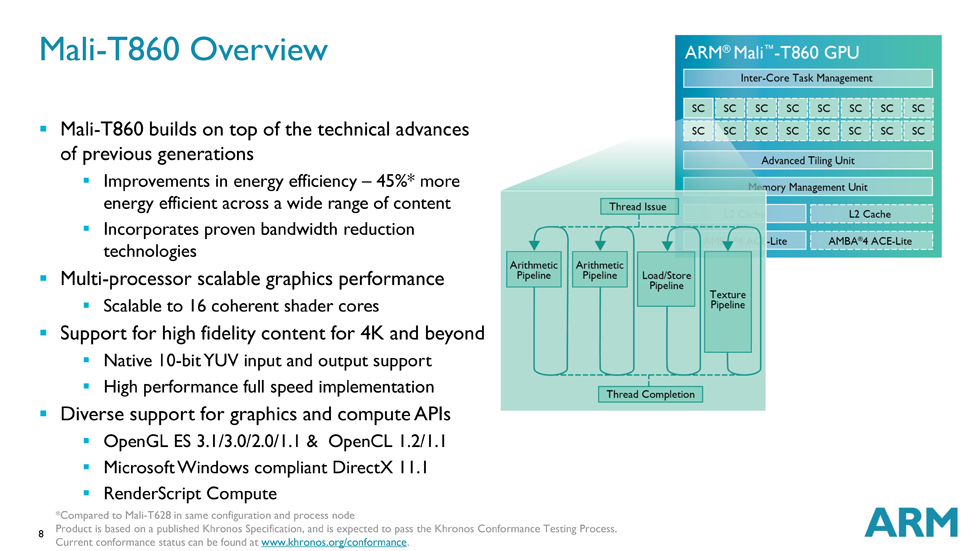 The Mali-T860 is, according to ARM, a much more efficient GPU than the previous generations stating that it is 45% more efficient at certain tasks than the T628, which was the company’s high performance part before the T700 series cam out. It also has 16 scalable shader cores, meaning that you don’t have to fully implement all cores in the design, but I suspect most that choose to license it will go for the 16 core design.

ARM also claims support for 4K, which very likely means the ability to display 4K pixels and maybe 4K UIs without much more than that. Because realistically, no mobile platform is really capable of 4K gaming right now unless they upscale 1080P content. Additionally, the GPU will support OpenGL ES 3.1 and OpenCL 1.2, but no Open CL 2.0. There is also going to be DirectX 11.1 support, but no DirectX 11.3 or 12.0 support. And last but not least, they also will support renderscript compute for all of the Android implementations. The lack of OpenCL 2.0 may be due to the fact that these are designed to be more mainstream or because OpenCL 2.0 is so new, but the lack of DirectX 12 is a bit interesting since this GPU will be in products sometime next year, which is around the time of Windows 10 (and DX12) launch.

That brings us to the Mali-T830 and T820 which are ARM Mali’s even more power efficient GPUs designed for the mainstream performance. These GPUs essentially carry many of the same capabilities of the T860 but with only four shader cores and no 4K support. They also lack an advanced tiling unit, which the T860 has. With these ARM Mali graphic chips, the company claims 50% better areal efficiency and 55% faster performance over the T622 generation of ARM Mali graphics, which preceded the current T720 generation of Mali GPUs. 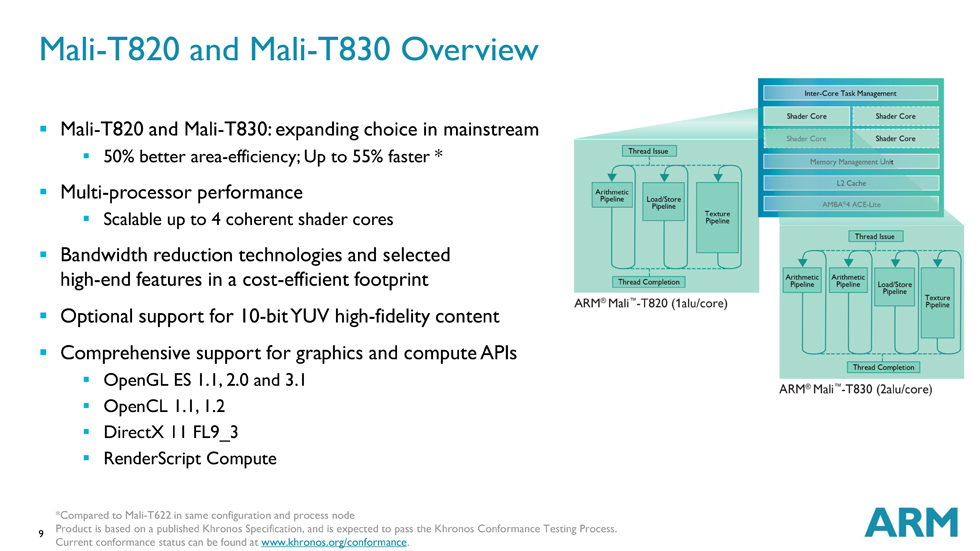 Last but not least, are ARM’s Mali Video and Display processors which are designed to bring ARM’s goal of efficiency all the way from the GPU to the display processor. The way that they achieve this is with their new Mali-V550 and Mali-DP550 processors each designed for high efficiency operation in conjunction with the ARM Mali 800 series GPUs.  As you can see from the slides below, the Mali-V550 also brings HEVC (h.265) encode and decode capability to ARM’s video processors and brings the ability to support multiple standards. The V550 also scales from doing 1080 at 60 FPS with a single video care to 4K at 120 FPS with 8 video cores and it supports multiple simultaneous encode and decode streams. 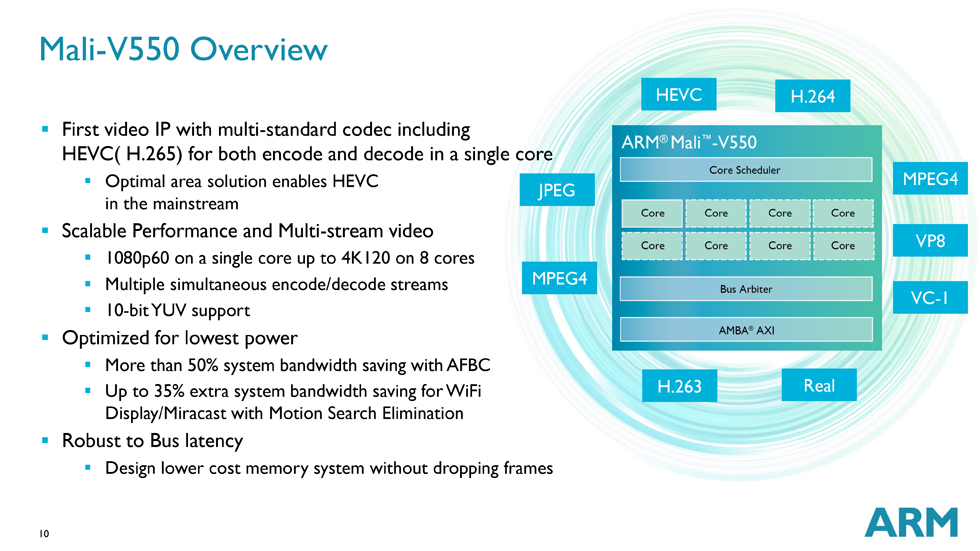 The Mali-DP550 further enables a lot of what the T860 and V550 can do with improved power and memory efficiency as well as the ability to scale to 4K resolution. ARM is clearly ready to hop aboard the 4K bandwagon, with Qualcomm leading the charge. They also support 3rd party display differentiation which allows for 3rd party/SoC vendor IP into the Mali display pipeline. 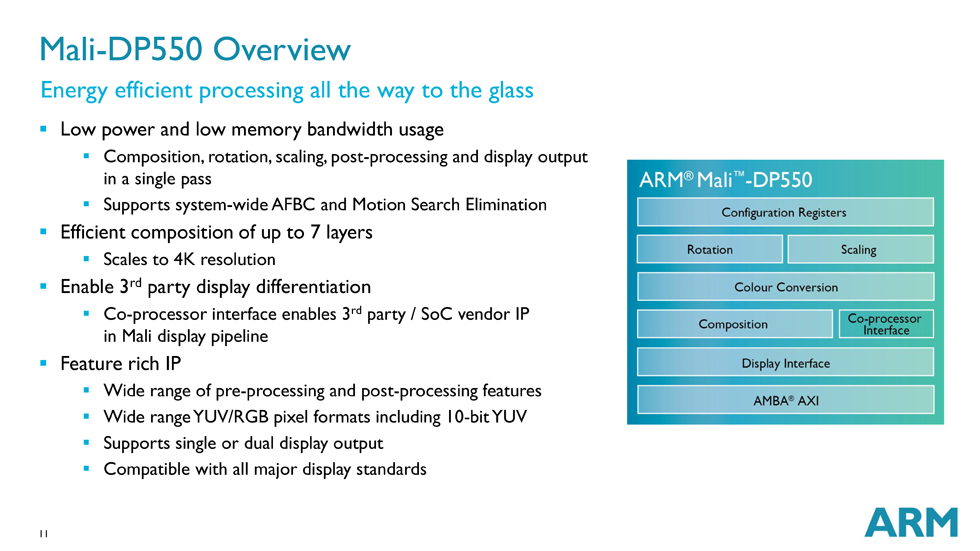