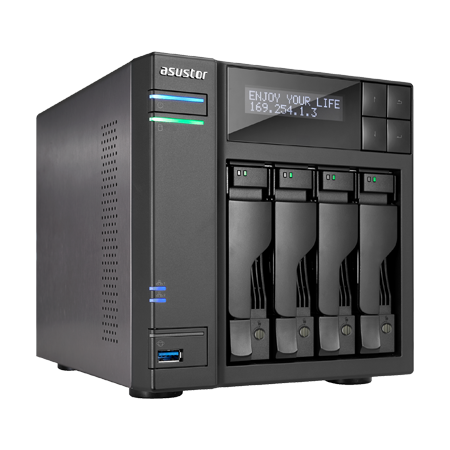 Asustor launched its latest NAS unit, the AS7004T, which the vendor claims is its most compact four-bay model in the AS70T line. The highlight of the AS7004T is that it can accommodate a total of 24 TB storage, which meets the needs of even the most demanding SOHO users.

Powered by a 3.5 GHz dual-core Intel Core i3-4330 CPU, the AS7004T is extensible not just in the storage department, but also when it comes to memory. The NAS features 2 GB of RAM by default, which can be extended to a maximum of 16 GB. Although the read and write numbers are based on the kind of hard disk you install, Asustor claims that with a NAS-compatible disk can net speeds of over 112 MB/s.

In terms of connectivity, there are two Gigabit Ethernet ports at the back, three USB 3.0 ports, two USB 2.0 ports, one HDMI (1.4a) and two eSATA ports as well as an S/PDIF port for high-definition audio. Cooling is taken care of by a single fan and dedicated heat pipes that direct airflow from the front to the back of the NAS, effectively cooling the CPU and disc trays in the process.

A basic security measure sees the inclusion of locks for drive bays, and the hard discs can be mounted in various configurations that include a single disc, JBOD, RAID 0, RAID 1, RAID 5, RAID 6 and RAID 10. There’s also the ability to hot swap discs and online RAID migration.

On the software side of things, the AS7004T comes with ADM 2.3 (ASUSTOR Data Master), which features a redesigned interface that allows for faster navigation. For using wanting to link their multimedia to a home theatre client, there’s the provision to install XBMC, and ability to stream 4K content. Rounding things off is a configurable LCD readout that lets users monitor disc usage and more. The AS7004T is backed by a three-year warranty.