Everyone knows that Xiaomi’s growth has been remarkable, and now two separate reports from IDC and Strategy Analytics quantify it: the company is now the world’s third biggest smartphone manufacturer thanks to growth in Asia’s emerging markets.

According to data provided by IDC,  Xiaomi accounted for 6% of the approximately 320 million smartphones shipped during the last quarter. In comparison, Apple claimed 12% of all handsets shipped while the market leader Samsung had a 23.8% grasp on the market. The biggest loser of the lot was Samsung, which saw its market share erode by 8.2% compared to the same quarter last year. 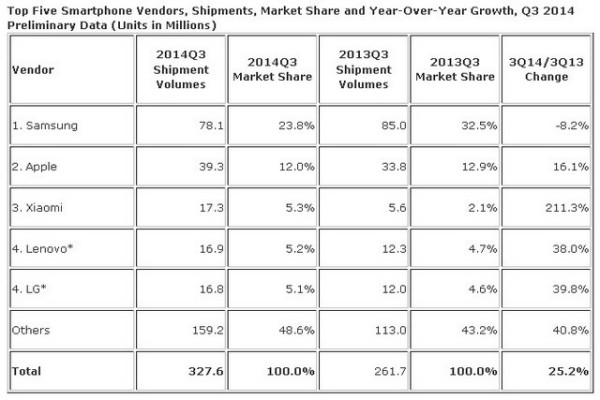 IDC chalks up the success of Xiaomi to its successful launch of its flagship Mi4 smartphone, and expansion into India and Southeast Asia.

“Key to its success was the launch of its Mi4 smartphone in August, which was positioned as a high-end alternative to the status quo. What remains to be seen is how quickly the company can move beyond its home territories to drive volumes higher,” IDC said in a press release. “Despite rumours of a slowing market, smartphone shipments continue to see record-setting volumes.”

“Samsung continues to face tough competition from Apple at the higher-end of the smartphone market, from Xiaomi and Huawei in the middle-tiers, and from Lenovo and others at the entry-level,” Strategy Analytics said in its report.

Any way but Huawei

In many ways Xiaomi is beginning to run into some of the same problems that Huawei (SHE:002502) has experienced over the past three years: Sinophobia.

Xiaomi has done its part to address these concerns, by promising to move data out of China  and providing a feisty response to claims that the company engages in wholesale design theft from its competitors.

But as Xiaomi grows, these attacks are expected to intensify. Huawei — though not directly comparable — suffered through an onslaught of allegations that it was an extension of China’s official signals intelligence apparatus, but largely that has come from clever lobbying by Cisco (NASDAQ: CSCO). When put to the test by security researchers, Huawei’s gear was not a listening outpost for China’s spies — it was just buggy and poorly made. There’s no evidence that Apple or Samsung are engaging in the same sort of attacks against Huawei, but it wouldn’t be entirely implausible.

Perhaps, however, Xiaomi will avoid the pains of expansion that Huawei experienced. Hugo Barra, its global VP and face of the company, recently told The Wall Street Journal that his company has no plans to expand into the United States.