ecoATM, a division of Outerwall who is also the parent company of Redbox and Coinstar (Nasdaq: OUTR), has a nationwide network of 1,510 automated electronics recycling kiosks located in shopping malls and stores. The kiosk will take your old phones, tablets, and MP3 players and turn them into cash on the spot.

Last week at Pepcom-SF, BSN* spoke with Juli Spaventa who demoed a unit for us. The kiosk requires only a few steps to recycle your device. 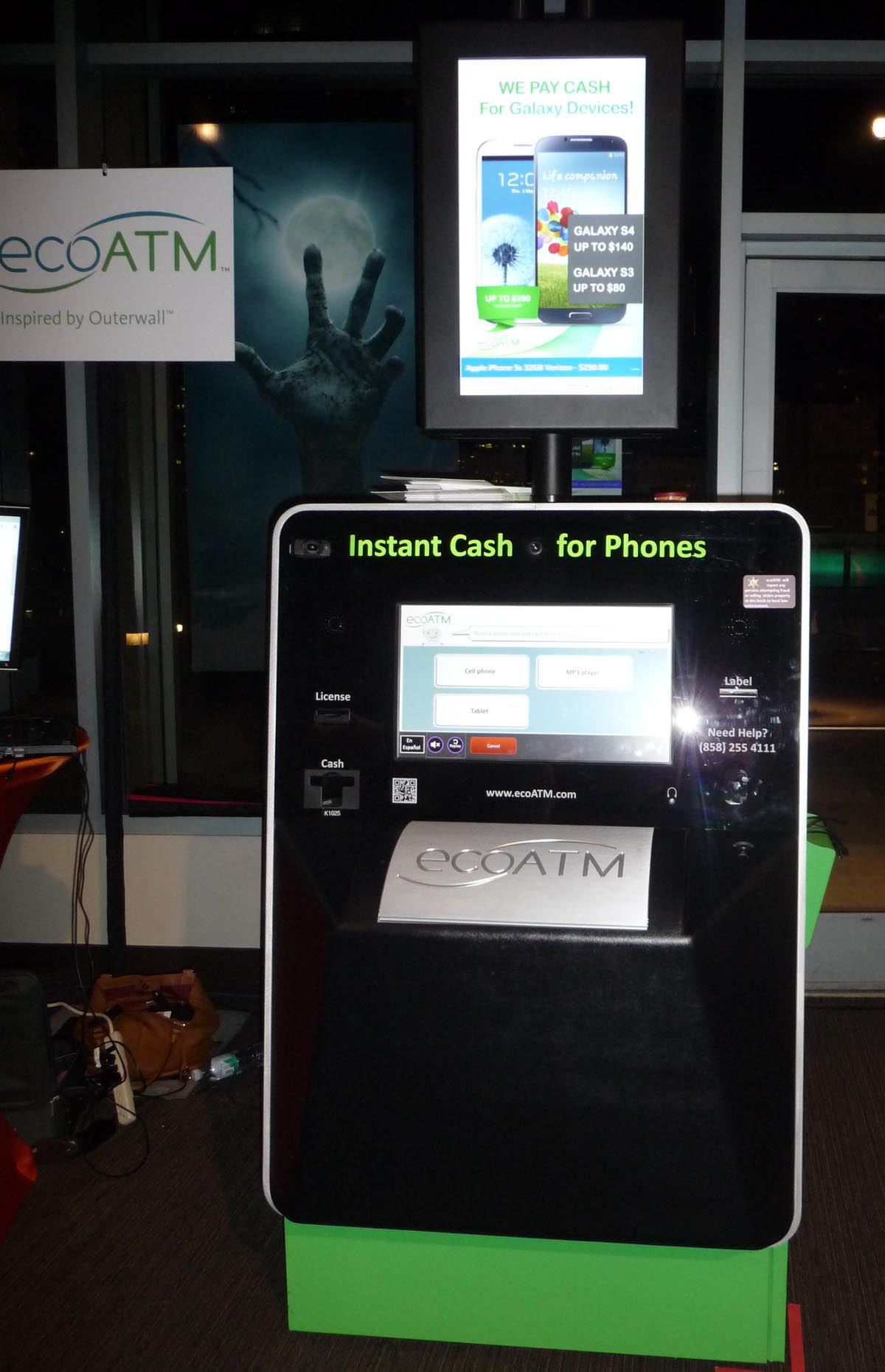 You simply follow the on-screen prompts and insert a valid government-issued ID. ecoATM uses a state-of-the-art ID scanner and AssureTec Reader validation software that not only photographs the ID but validates its authenticity by examining the ID for holograms, watermarks, or other specific authentication methods used in all 50 states. Spaventa said they have 29 patents on their one-of-a-kind kiosk. Fake ID’s may get you into the nightclub, but they won’t get you cash for a stolen phone.

After your ID is validated, an ecoATM’s security person checks to see you match the ID by watching you from the web cameras in the kiosk. All this only takes a couple of minutes. If the technician cannot confirm you are the person in the ID you presented, then game over – the transaction is canceled.

Assuming your face matches your ID, the kiosk dispenses a tracking decal to put on your device. After affixing the decal, you put your device into the kiosk and it scans your device’s condition and compares it with a database to make an offer based on the market value and current condition. At that time, you can accept ecoATM’s offer or it will return your device out of the kiosk. If you accept the offer, you must use the thumb print reader which keeps the thumb scan as part of your security information. Then your cash is available just like a bank ATM.

We decided to check out a kiosk at a local mall. While there, we noticed another benefit – no-cost charging station on one side of the kiosk. A man was just starting the process of recycling his older iPhone for cash. We asked him if we could follow along. 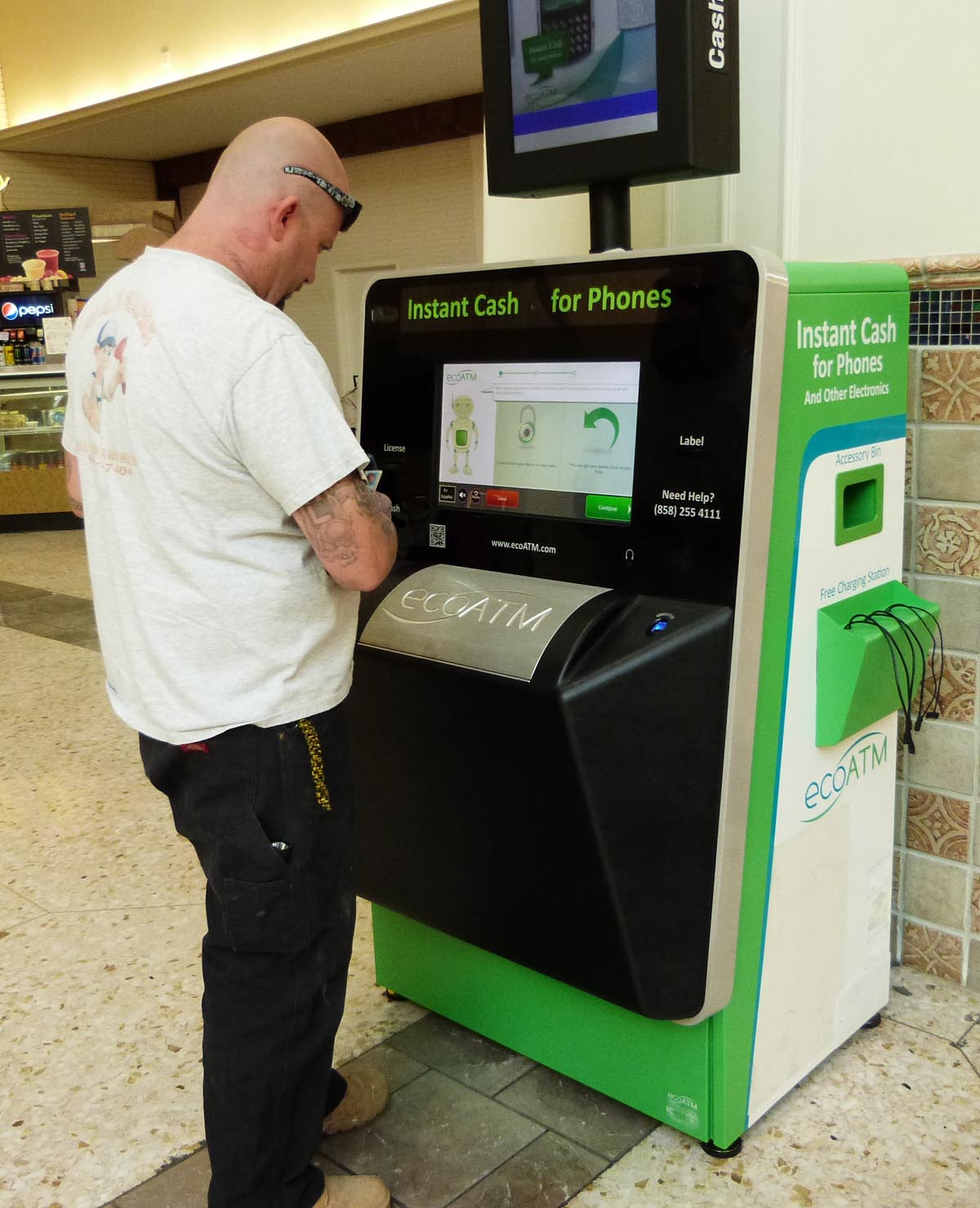 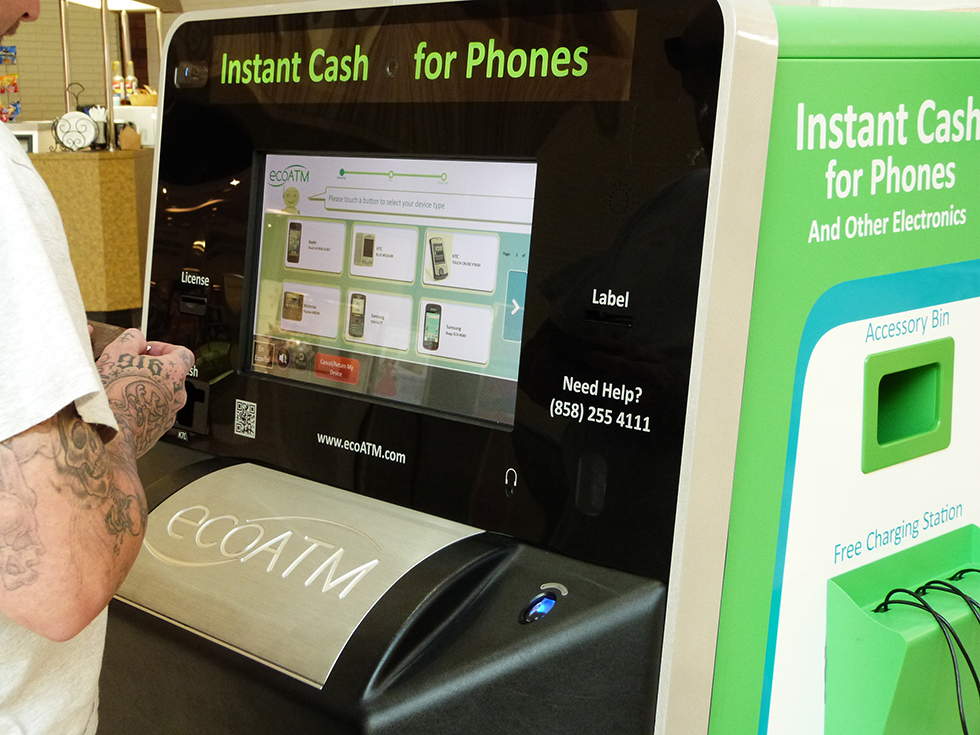 When the man, who simply identified himself as Alan, was finished and had his cash, he said: “This is way better than having it lay around in a drawer”.

Some law enforcement agencies have been quoted in past articles about ecoATM saying it is too easy for a crook to get cash for a stolen phone. So we contacted ecoATM’s HQ about that. They called back and responded to our query. Their spokesperson confirmed that the transaction we watched followed their standard security verification processes. The spokesperson said that less than 1 percent of the phones recycled by ecoATM are proven to be stolen. Many of the stolen recycled phones end up being returned and the crook caught like this story from San Francisco. She also explained another aspect of their kiosk for customers who might be wary of presenting personal information. We were told that only law enforcement can get a print out of any specific transaction with the person’s information and the information about the device that was recycled.

A few law enforcement agencies have acted like they want the kiosks removed because of the potential for fraud. They didn’t react that way to Target, Home Depot, or Walmart when millions of their credit card numbers were compromised. Could it be because ecoATM is a new company, law enforcement is trying to hold them to a double standard when compared to big box stores?

ecoATM can prove there is a second life for 75 percent of all devices collected. For the remaining 25 percent, ecoATM partners with R2 certified e-waste reclamation facilities to ensure that those materials are responsibly reused and recycled. ecoATM holds Responsible Recycling (R2) and ISO14001 certifications, confirming the company’s commitment to maintaining the highest standards of electronics recycling, as well as ISO27001 certification for information and personal data security. ecoATM’s tracking system is much better than using Craigslist or a questionable phone reseller to recycle your devices.

The ecoATM spokesperson told BSN* that a Forrester Research study said 57 percent of American device owners have an idle phone laying around their home, yet only 22 percent of those owners say they have previously recycled cellphones they no longer use. The company has already collected more than three million devices. The collection of all those devices enabled the recovery or reuse of 879,000 pounds of recyclable materials that’s nearly enough plastics, metals and potentially toxic materials to equal the weight of two Boeing 747-400 series airplanes.

ecoATM does recommend that everybody write down the International Mobile Equipment Identity (IMEI) or Mobile Equipment Identifier (MEID) number of their device. MEID is a form of ESN (Electronic Serial Number). Normally they are hidden below or under your device’s battery. This location will help you find those numbers.