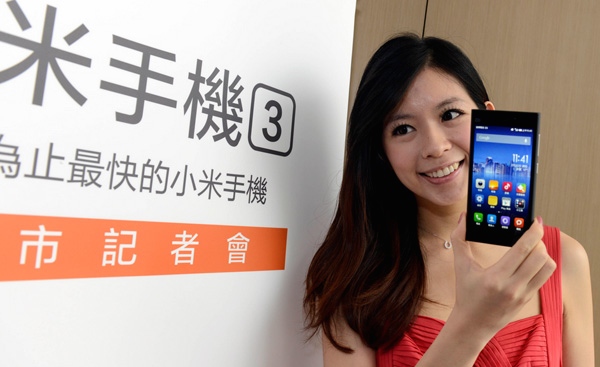 Chinese smartphone brands are vying for market share in neighboring Taiwan, where international brands and the island’s own HTC (TPE: 2498) have historically been dominant.

While the Taiwan market is small, its cultural similarities with China makes it a logical choice for ambitious Chinese smartphone makers like Huawei Technologies (SHE: 002502). and Xiaomi Inc., who are in the midst of international expansion. Xiaomi has an 11% share of Taiwan’s handset market and Huawei 2%, according to IDC, a market-research firm. Chinese brands are searching for new growth opportunities overseas as their home market – the world’s largest for mobile phones – becomes increasingly saturated, analysts say.

“Chinese brands can use Taiwan as a stepping stone to other global markets,” says Sophia Chen, a handset analyst with the Market Intelligence & Consulting Institute (MIC), a research firm affiliated with the Taiwanese government.

Upgrading ‘Made in China’

In the Taiwan market, where they are newcomers, Chinese smartphone vendors must build brand awareness and counter the stigma that their products are of dubious quality. To that end, they are offering both inexpensive feature-packed mobile phones and flagship high-end handsets to Taiwanese consumers.

This year, Shenzhen-based Huawei, the world’s fifth-largest smartphone manufacturer by shipments, aims to double its 2013 Taiwan sales to 200,000 units. In July, it launched the Honor 3C, a 4G LTE-enabled handset in partnership with the Taiwan carrier Chunghwa Telecom (TPE: 2412). Priced starting at $564 (NT$16,900), the device competes in Taiwan’s premium handset market.

The high-end market will be difficult for Huawei to penetrate, says Alan Chen, an analyst at TrendForce, a Taiwan-based market research firm. “Made in China means low and mid-priced products to Taiwanese consumers,” Chen says. “Taiwanese consumers are very brand conscious. They are likely to choose a comparable Samsung phone instead.”

But high-end handsets may help Huawei build brand awareness in Taiwan, says Carlos Peng, an analyst at Fubon Securities in Taipei. “Huawei wants to show Taiwanese consumers that as a Chinese brand it is capable of producing a high-end smartphone that in theory can compete with HTC, Samsung or LG,” he says. For that reason, Huawei is content to sell premium handsets in small numbers for now, he adds.

Oppo, which was founded in 2004 as a manufacturer of Blu-ray video and MP3 players, is another Chinese brand targeting Taiwan’s premium handset market. Oppo launched its flagship 4G Find 7 in the third quarter through Chunghwa Telecom at a cost of $566 (NT$16,990). The Dongguan-based firm says it expects overseas revenue to comprise more than 50% of its total sales by 2017.

Oppo is touting the Find 7’s camera, which features a Sony camera module designed for taking selfies. Oppo may have a niche market opportunity with selfie fans, as no comparable product exists on the Taiwan market now, says Joey Yen, a research manager with IDC in Taipei. But if an international or Taiwanese competitor launches a similar product, Taiwanese consumers will choose that device over Oppo’s, she says, adding: “Taiwanese consumers still have reservations about the quality of Chinese brands.”