If you Google Tech 21, you’ll find two very different companies, both involved in mobile devices, both of interest to techies. One was a case vendor at Pepcom. The other is a sound producing company. One surrounds your iPhone with energy absorbing guards. The other exudes musical energy from a portable amp.

Tech 21 USA, the sound-based company, has a longer history than Tech21 Impactology, the smartphone related company. They are referred to respectively as Tech 21 and Tech21 in this article.

Tech 21’s portable Flying Rig 5 has a genuine SansAmp, a reverb, a delay, and a power boost. 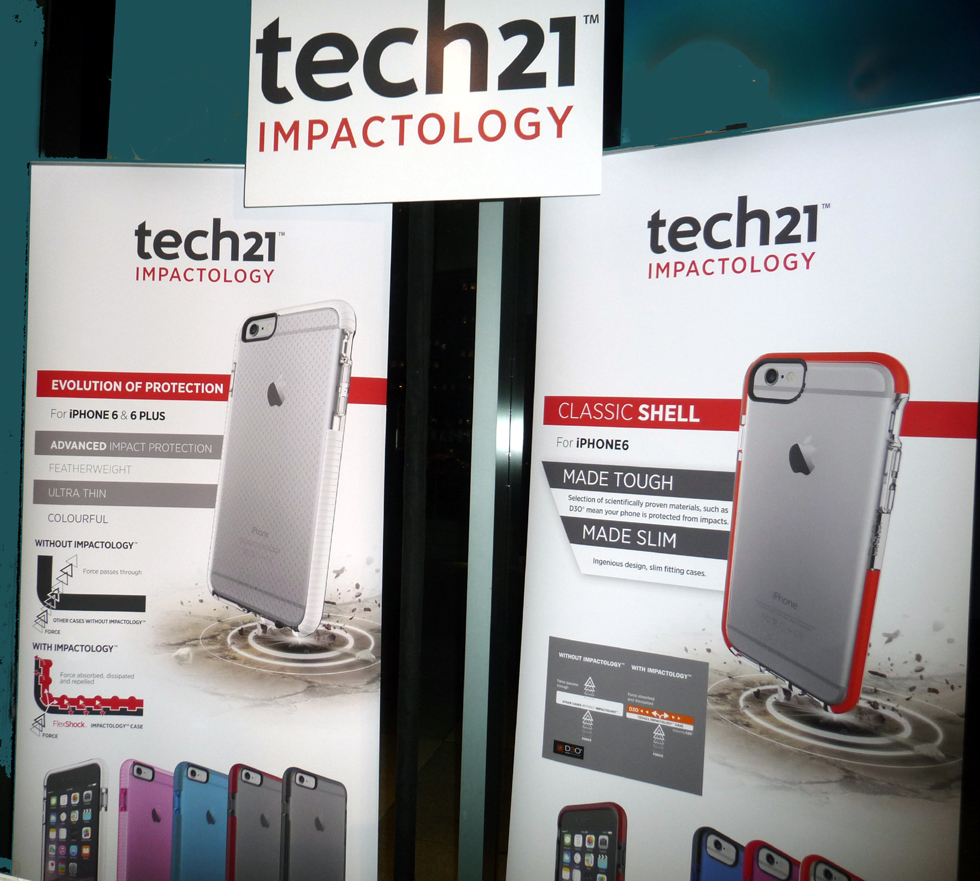 Tech 21 Founder Andrew Barta just celebrated his musical company’s 25th anniversary. He pioneered the direct recording movement and created an entirely new category of signal processing. The SansAmp tube amplifier emulator was revolutionary. It enabled musicians to “dial in monster tones and patch them directly to a studio mixer or stage PA.” The 100 percent analog SansAmp delivered huge sound from a pocket-sized pedal.

Their Fly Rig 5 is an amp emulator, speaker, and mic simulator with the functionality of a full pedalboard, without the crackling patch cables, dying batteries, and ground loops. It weighs just over 18 ounces, is less than 12 inches long, fits into a guitar case, and sells for $249. Perfect for a musician on the road. 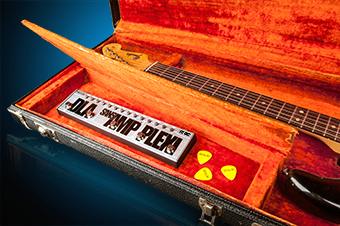 Barta’s proprietary technology stands alone in the analog arena. He says of his analog choice versus digital options: “Overall, I think analog is much warmer, more organic, and more responsive. There’s also the issue of clarity. At extreme settings, digital tends to produce more artifacts (garbles) and unnatural noise in the background.”

The similarly named companies issue from different continents. The origin of Tech 21 USA is obvious, proudly subtitled “Designed and Manufactured in the USA.” Tech21 Impactology is located on the River Thames in London. Tech21 also has a long history. Back 19 years ago, Jason Roberts developed an aluminum cage in which a laptop was suspended to prevent impacts. His research progressed to scientifically tested, shock-absorbing polymers for mobile devices.

The technology behind both companies is impressive. Tech 21 emphasizes bypass design for sound production while. Tech21 emphasizes chemistry for mobile device protection. Tech21 uses a combination of materials for their Impact Shield screen protectors and their slim cases for phones and tablets.

Tech21 offers shell and band protection for a variety of devices.

BulletShield is a BASF impact absorbing polymer used in the Impact Shield, similar to that used in bullet proof glass. D30 is a smart, shock absorbing dilatant material whose molecules lock together upon impact, causing the material to absorb and dissipate energy, reducing the damaging force transmitted to your device. 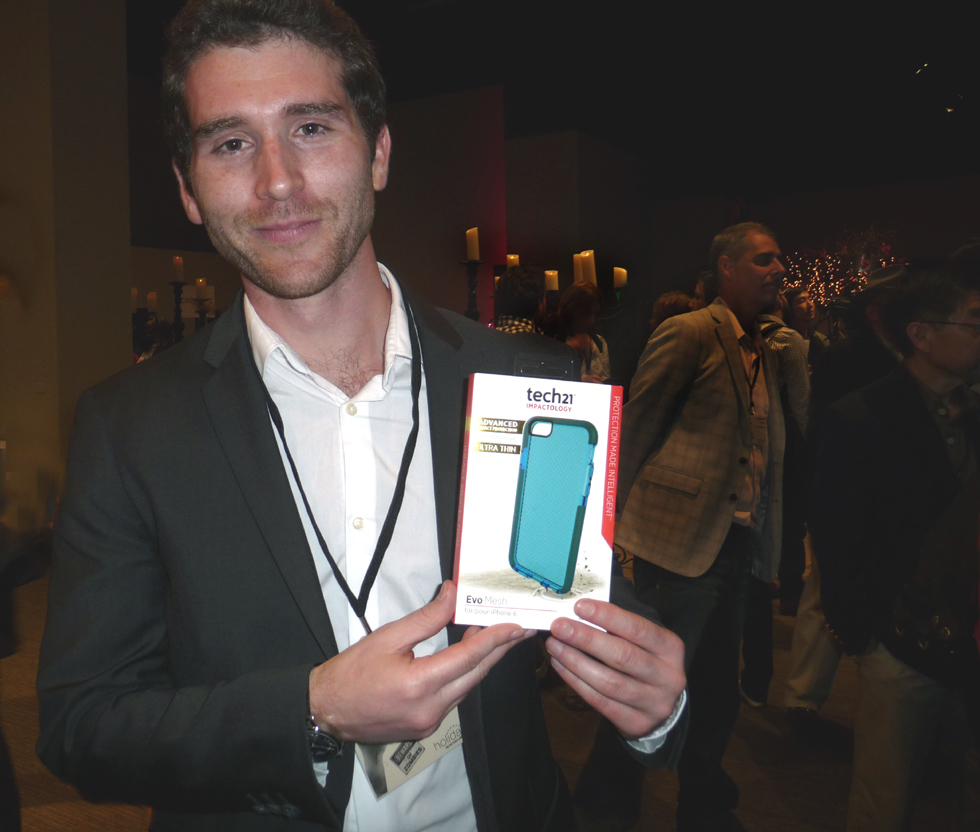 At Pepcom, BSN* learned of the Evo Mesh protective casings for the iPhone 6 from Tech21’s Jason Dollery.

Polycarbonate is a group of thermoplastic polymers that are molded under high heat temperatures and can be cut to match any design. FlexShock is a cutting edge hybrid material that can be molded via the injection process to fit the contours of a device’s shape. Additionally, it is ultra thin, reducing the bulk surrounding your device. You’ll find it in Tech21’s MacBook series. The final ingredient in the Tech21 mix is Thermoplastic Polyurethane (TPU). This plastic is elastic, flexible, and abrasive resistance to impact, weather, tear, oil and grease.

At Pepcom, we were given a demonstration of how this amazing fluid material when pulled out of the pot and wrapped around the rep’s finger immediately protected it from the impact of a hammer. Gotta get some of this stuff for your carpenter friends. 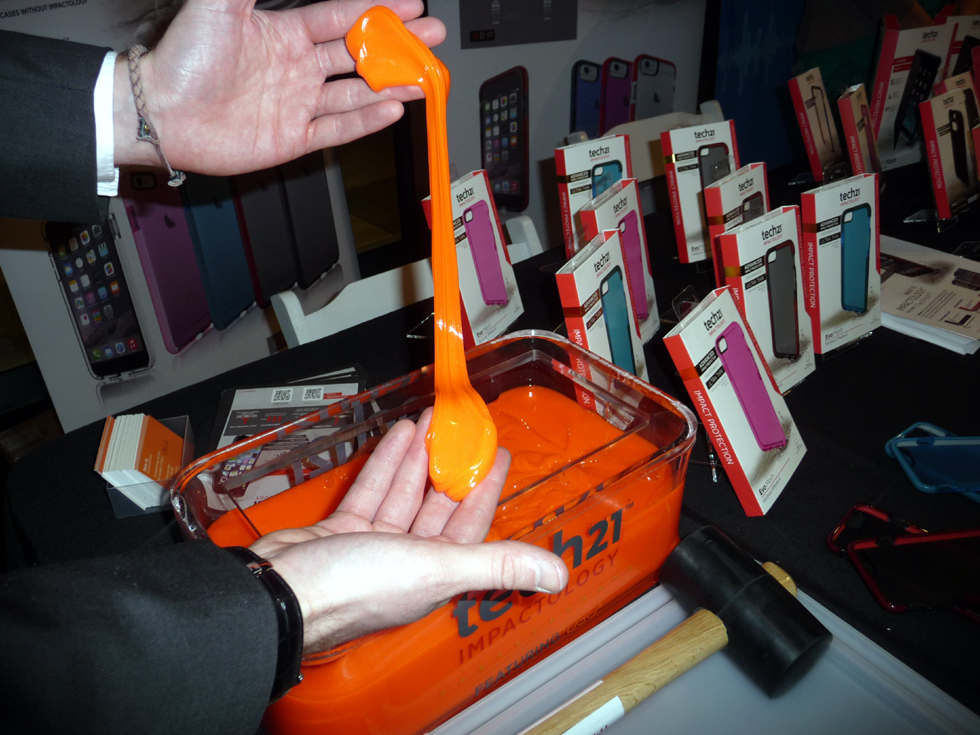 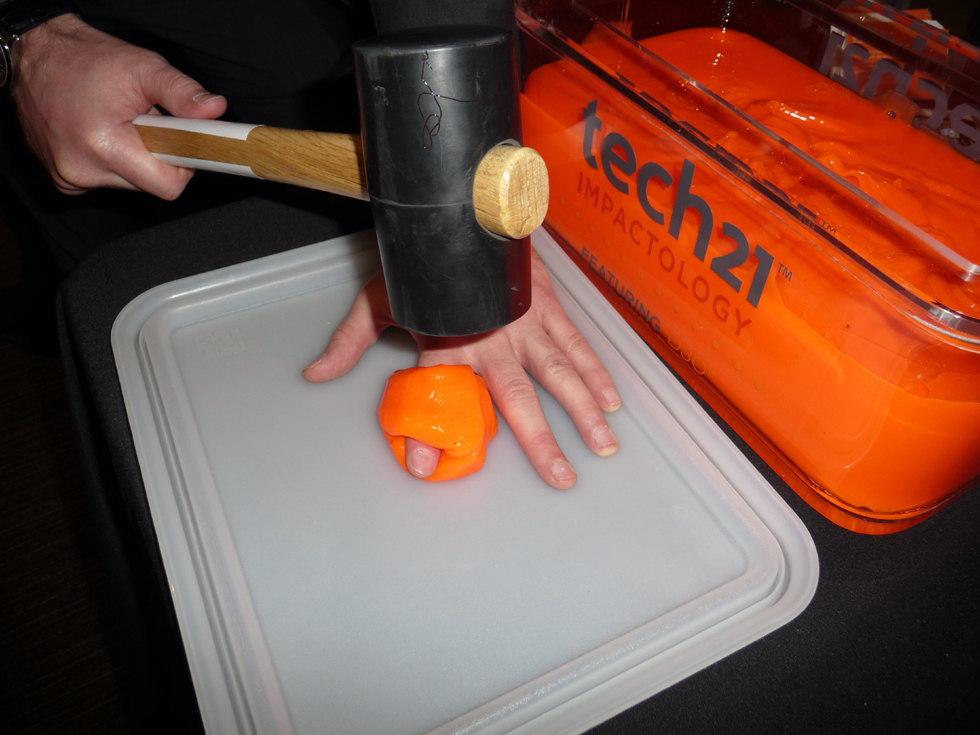 Whether you are a musician or a mobile device collector, Tech 21 and Tech21 both have useful products you should consider. A demonstration of D30 and a demonstration of Fly Rig 5 by Andrew Barta himself are both on YouTube.