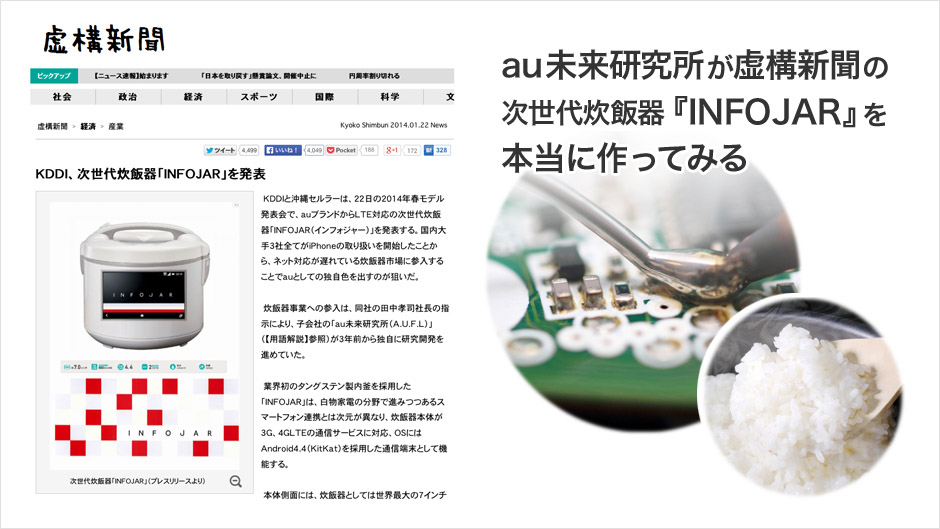 Okay, the introduction is probably a bit exaggerated, but au KDDI did announce the development of a new rice cooker that apparently does a lot more than just cook rice. This “New Era Rice Cooker” is expected to be a master invention that will feature what we can simply describe as “cooker selfies”.

It all started with a harmless joke article that was recently published on Kyokou Newspaper, a Japanese news website that features fictitious articles for comedic entertainment. The fake article mentioned that the INFOJAR, as it is named, is supposed to be a rice cooker developed by au KDDI that is installed with Android 4.4 and will have 4G LTE connectivity. The rice cooker will have a 7-inch full HD screen on it and will have some rather odd features. For example, it will be capable of sending Twitter notifications about its rice cooking, as well as streaming videos of it as it cooks rice.

On November 13 however, au KDDI’s Future Research website suddenly surprised everyone, with an announcement that they are going to develop the exact same gadget that Kyokou Newspaper previously “featured”. In a press release titled “We shall attempt to create the New Era Rice Cooker INFOJAR“, the company expressed its jovial interest in creating such an appliance, even going as far as to implement almost all of the features that the article has mentioned.

So yeah, we’re about to see the birth of a rice cooker that cooks rice, all the while letting the world see minute by minute how it cooks, and allowing its user to surf the net all the way.

Of course, as it is just an announcement for now, a working prototype is still yet to be developed. However, with au KDDI already leaving its official word about it, we can probably say an early goodbye now to our trusty, but obsolete, rice cookers.