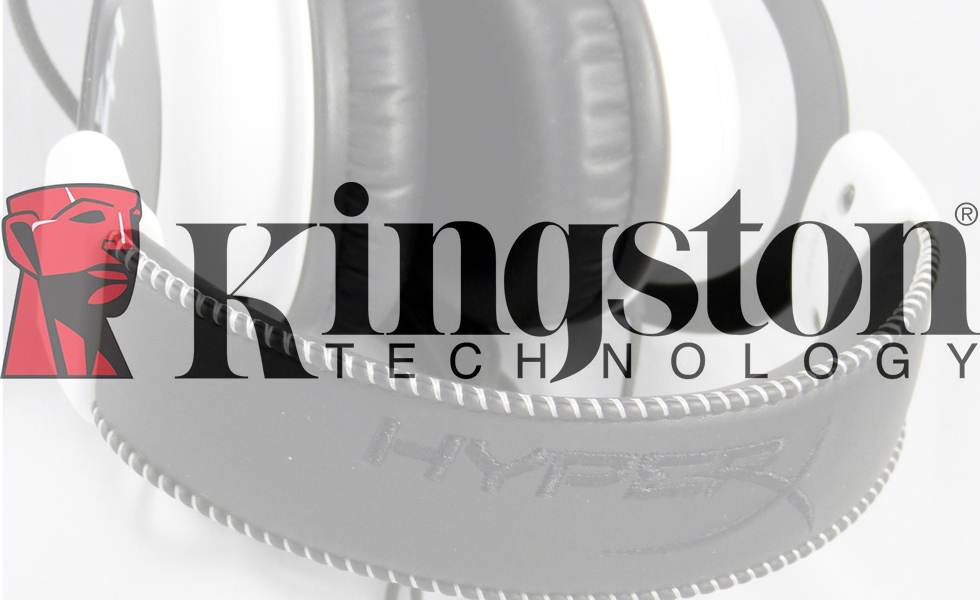 While at Pepcom-San Francisco we met with Kington’s David Leong and Shealyn Johnson. They introduced us to their HyperX Cloud gaming headset. Kingston developed the Hyper X Cloud headset with the assistance of Qpad, a peripheral company based in Sweden. Qpad has helped others launch their headsets. That immediately raised our expectations because of the positive reviews for the Qpad QH-90. The Hyper X Cloud headset is aimed at price conscious “pro” gamers. Pricing has a wide range from $80 at Amazon

to $114 at Tiger Direct. BSN* considers the price point something that made us want to take a closer look.

The packaging has a colorful format in English and several Romance languages with the features listed on the back. 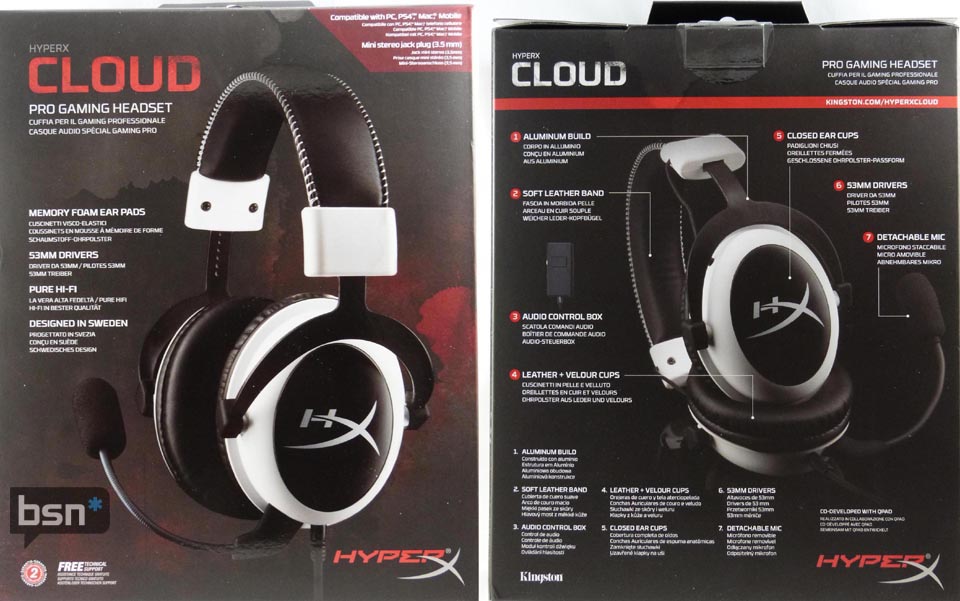 The specifications, as expected, are better than a lot of lower priced headsets, starting with closed ear cups, 53mm drivers, and frequency response range of 15Hz to 25,000Hz.

Slide the outer box off of the inner matt black box and you notice it has the stylized HyperX logo. Kingston put time and effort into showing that this headset is going to be special. 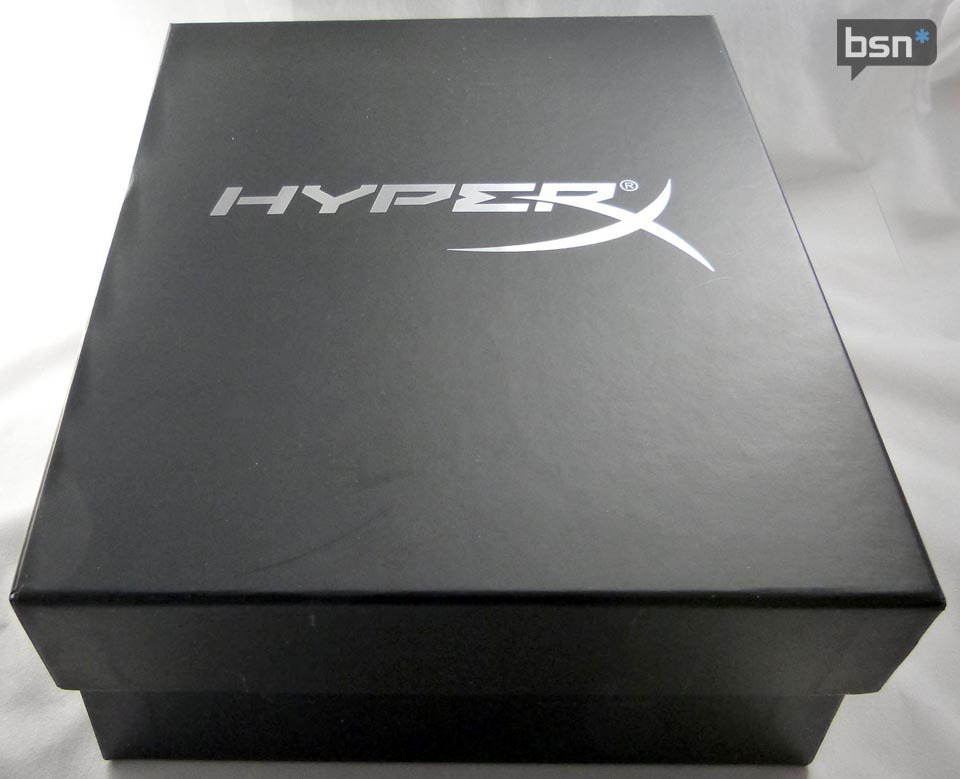 We lifted the lid of the inner box and found an introduction letter by HyperX General Manager, Anres “G8V1k1ng” Willumsen. Under the letter is a foam pad covering the parts. The inner box is also foam padded and at one end is a cover, again with the HyperX logo, which hides the carry pouch and a collection of cables. Software to control volume and tone was missing. 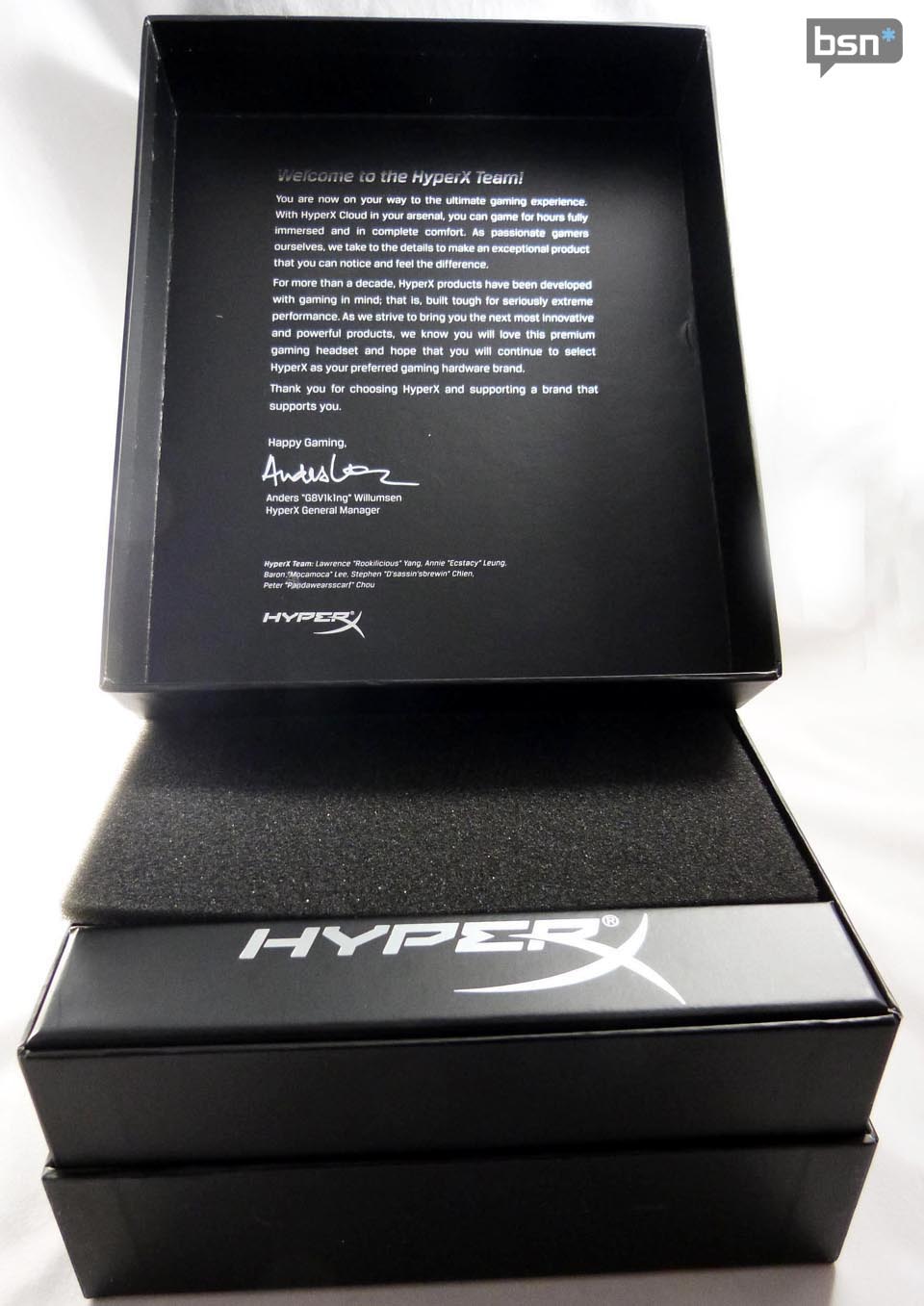 Under the foam pad are all the goodies in their own plastic bags. Kingston really did themselves proud in packing this product. 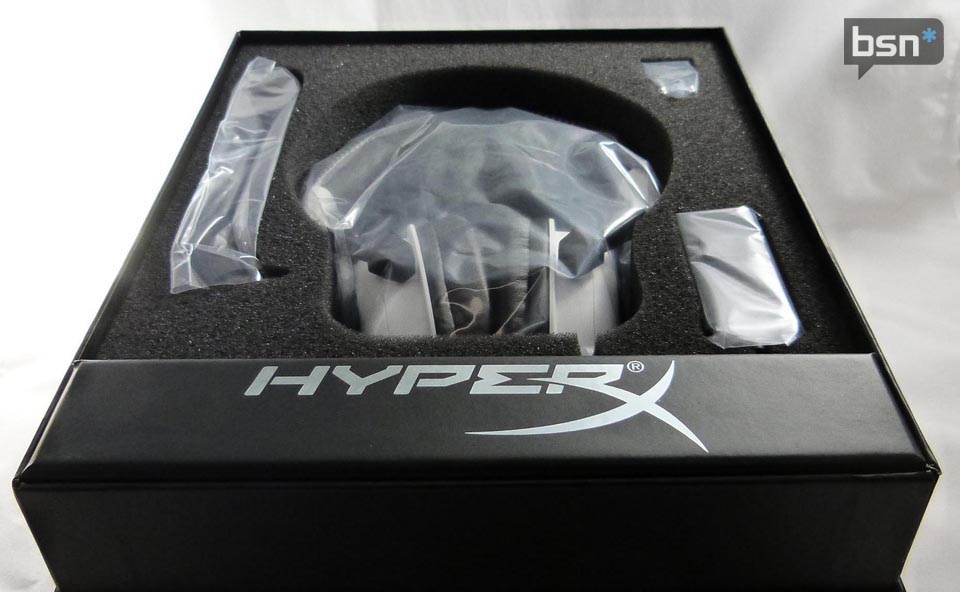 The detachable microphone has its own slot inside the black inner box as does the control box which has a one meter braded extension cord. The airline adapter has its own spot in the upper corner of the box. Additional cables are inside a black mesh padded bag. 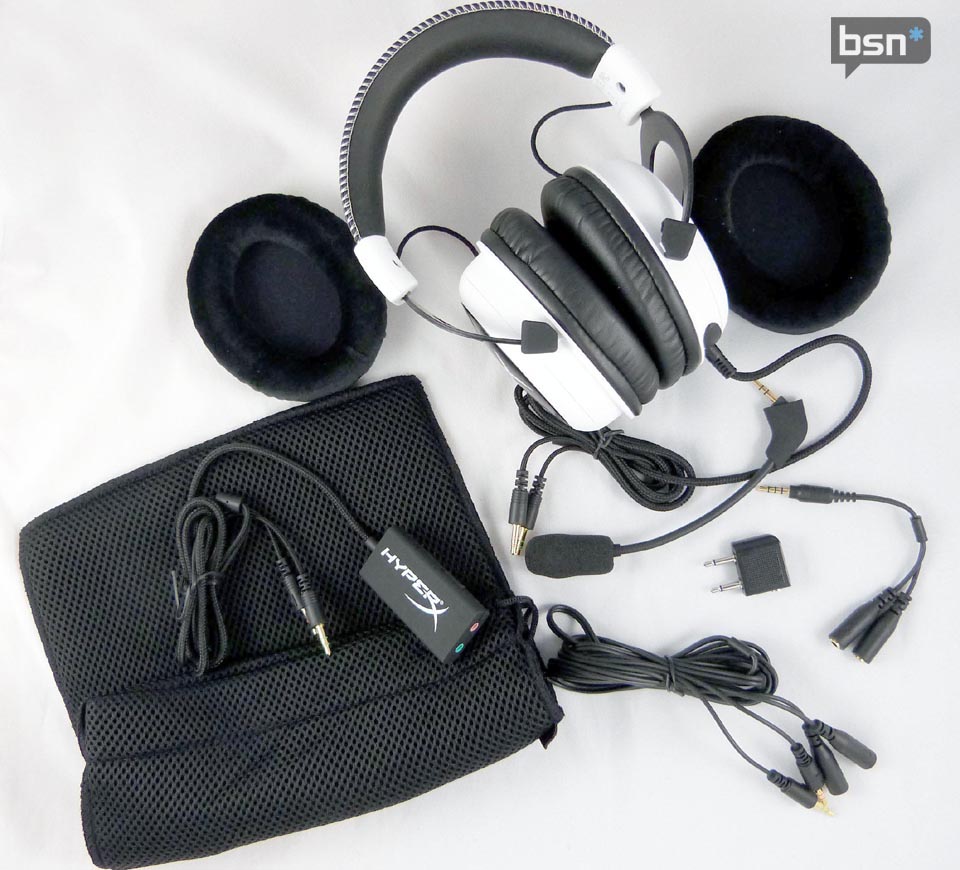 All the parts in full view 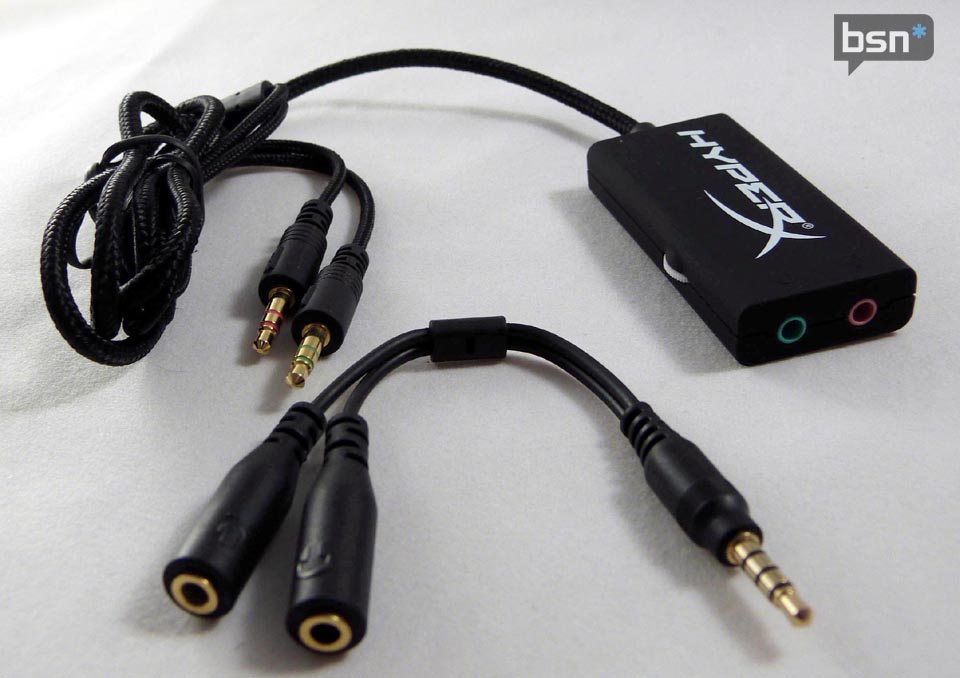 There is a two meter extension cord with color-coded male ends, and the airline seat’s sound adapter. The Y-cord, two-to-one adapter plugs into the dual-prong airline adapter for those long overseas plane rides. 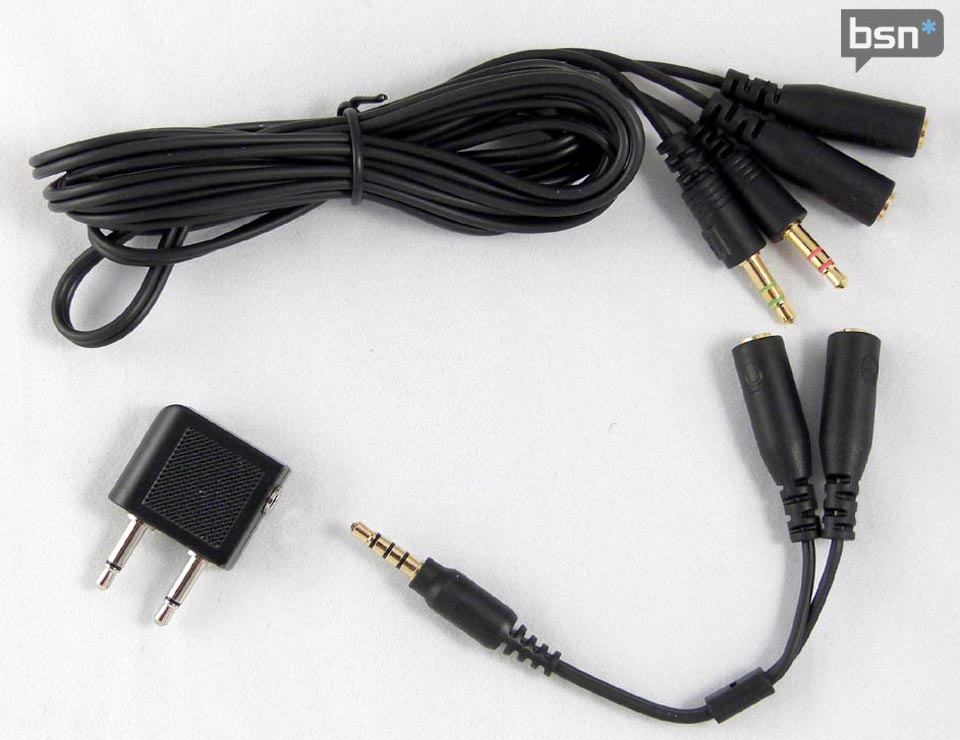 The Kingston HyperX Cloud is a well-built headset. The aluminum head band has foam padding and is covered in stitched soft leather with the HyperX logo. The headband is flexible, yet has a gentle clamping on your head. Several different people tried the headset and it accommodated sizes from youngsters to full-sized football player. The headband connects the closed ear cups with a hinge and there are braided cables to each cup. 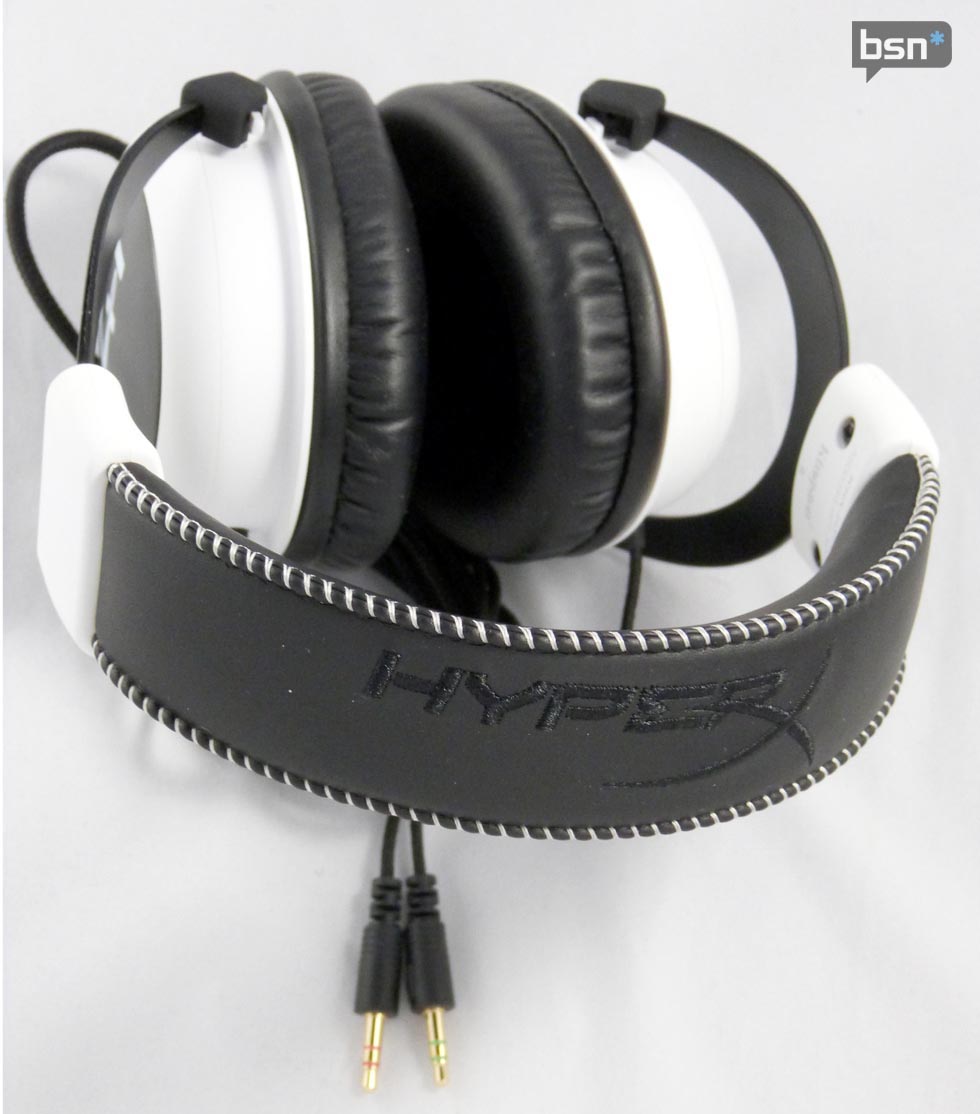 There are optional soft velour cups for the headset. They will change the sound because they are permeable. One problem I had was it took me nearly an hour to switch from the leather ones to the velour and back to the leather ones. I would not recommend trying this just before you sit down to play a game or listen to music. The slot for slipping the elasticized edges of the cups back into the cups slot is a really tight fit which is good for listening, but difficult for changing out. 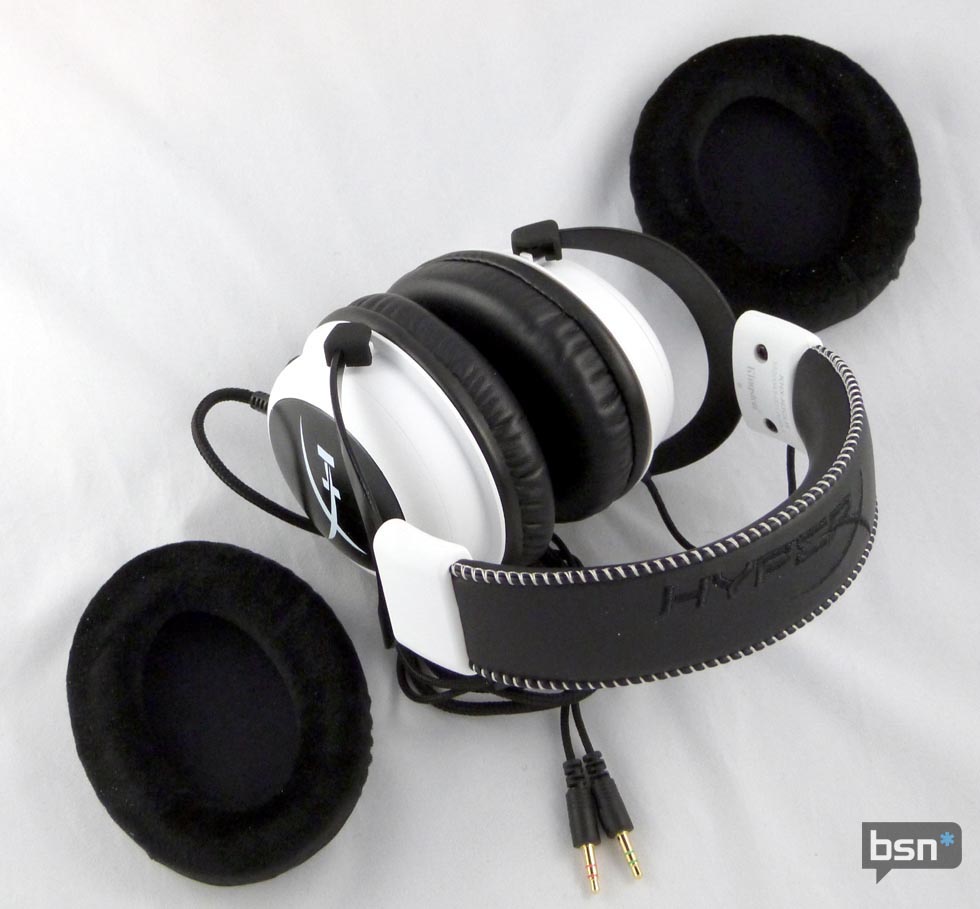 The microphone has a foam windscreen cover with a flexible six-inch boom. In the photo below you see the small plug that can be inserted into the left ear cup where the microphone plugs in. 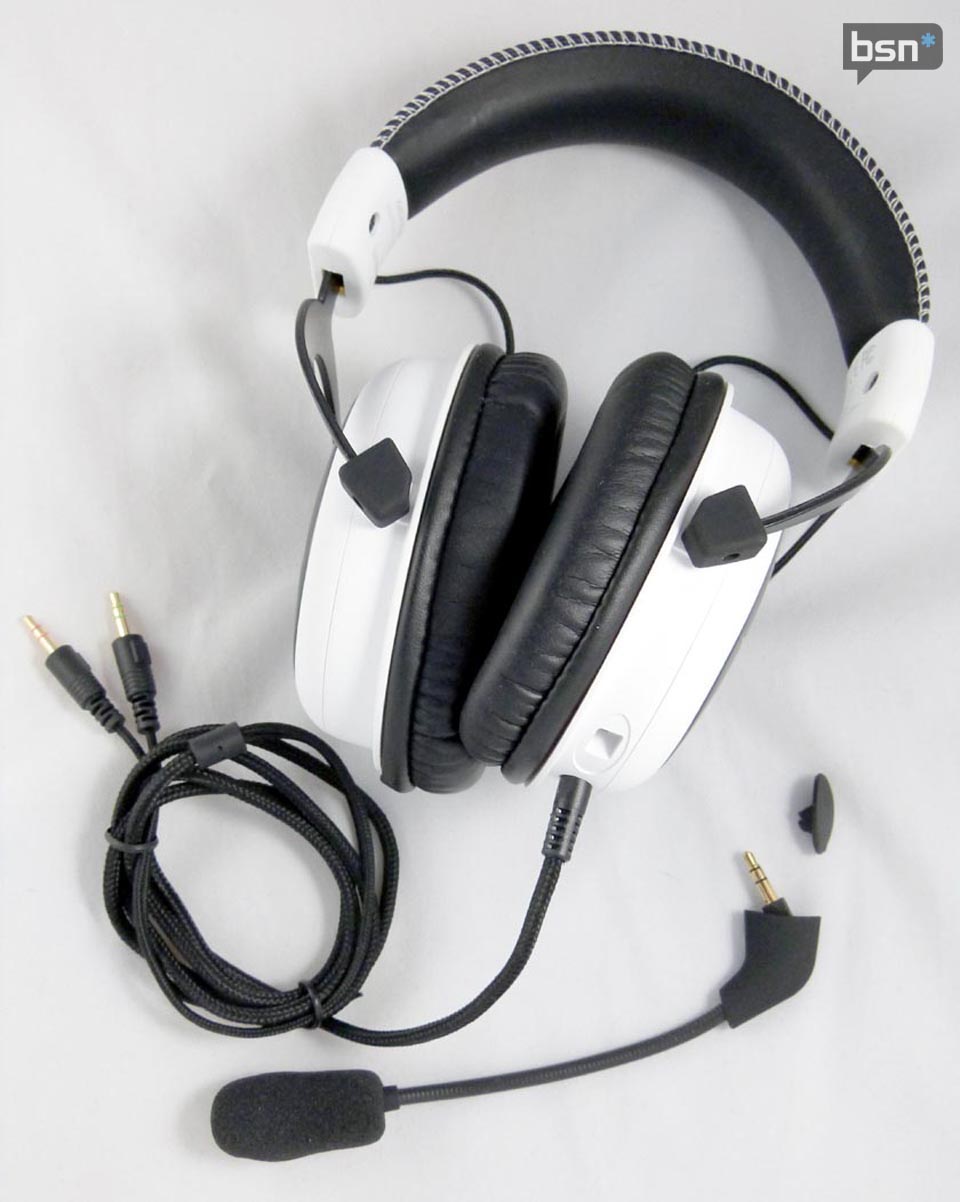 How does music sound? Everybody hears sound differently. Younger people have better hearing than us older folks. Also how much variation in musical styles you are familiar with will affect your expectations.

When I first tried the Kingston HyperX Cloud headset, I plugged it into the ASUS A55M-AUSB motherboard. I found that neither the treble highs, the bass lows, nor the volume matched my expectations. Next I tried the ASUS F2A85M Pro motherboard which was only a small amount better. Finally, I switched to the MSI A88XM-E45 gaming motherboard and I got the performance I was looking for. I immediately noticed the difference in symphonic music with the clear separation of the orchestra’s instruments. Then I switched to hard driving Jimmy Hendrix feedback guitar solos from Woodstock turned up all the way. The headsets didn’t distort.

I tried a couple of different movie DVDs and the actor’s speech was clear over the background sounds. Explosions were distinct and didn’t fuzz out like some inexpensive stand-alone speakers do. Jet engine aircraft sounded like they do on the runway tarmac. Next I plugged them into an older Onkyo receiver and DVD changer using the Y-cord, two-to-one adapter. The response range was very good to my ears. I even dozed off wearing them and awoke without any pain from having them on for a long time. The HyperX Cloud headset uses 60ohms and is capable of 150 watts input. The 53mm drivers are capable of driving sound levels that can be painful. Overall, the sound was bright and BSN* recommends gamers use a proven gaming motherboard with this headset. When I had the velour ear cups installed, although cozy, I noticed a considerable drop in volume and the highs and lows were just not there.

The microphone worked well for Skype and passed the compatibility testing for Dragon’s Naturally Speaking speech-to-text application . The latter can be a problem for some so-called gaming headsets. If as a gamer, you want that ultimate 3D surround-sound experience, you will have to double or triple the price of Kingston’s HyperX Cloud headset. If you play mainly story driven games and isometric games, this headset will do the job. The Kingston HyperX Cloud headset build quality is very good and the comfort level is excellent. It is a very good quality audiophile headset that is being sold to the price conscious gamer.