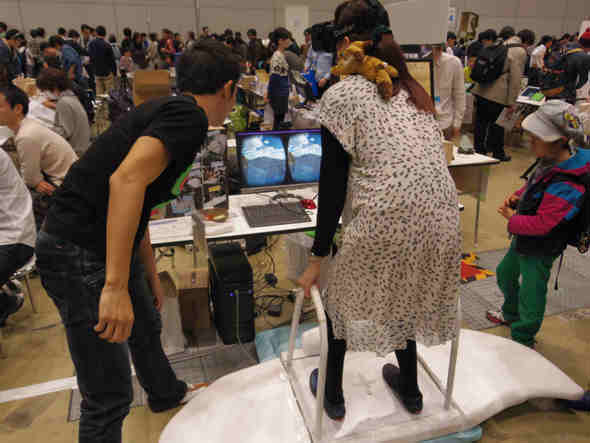 Nausicaä of the Valley of the Wind may be generally popular as a Japanese animation classic, but it also inspired technology, the Möwe glider being one of its iconic symbols. While there is already an ongoing project to build the real thing, one Japanese folk have decided to just settle on the next best thing: a virtual Möwe glider powered by Oculus Rift.

The Möwe (pronounced as mehve in the movie) glider is generally seen in Nausicaä of the Valley of the Wind as a wide, tailless glider, with its rider at the top of the vehicle (rather than inside or under it). The VR glider of the Möwe Flight Simulator is essentially the same; the user is strapped to a custom built platform where the rider stands, while traversing the virtual skies with the Oculus Rift headset. It was introduced a few days ago during the Maker Faire Tokyo 2014 event, where visitors of its booth were given the chance to try it out, and see the skies as did the royal protagonist of the original title.

Positioning of the virtual glider is adjusted using accelerators installed on the actual platform, while fans in front provide the “wind” as the virtual glider moves. A motor underneath also gives the sensation of a working rotor, increasing the overall level of immersion. Of course, with the Oculus Rift, you can get a 360-degree view of the virtual skies, so you might even see a bird or two flying along with you as you glide away.

The concept, as well as the entire setup and software for the Möwe Flight Simulator were developed by Wada Takahiko, and he has publicly made the program source code and schematics available at his own developers website. As it is a privately-built project, it is unlikely that a commercial version will be available soon.

But who knows, maybe the concept might spark an entirely different idea for a new immersive Oculus Rift-based game.