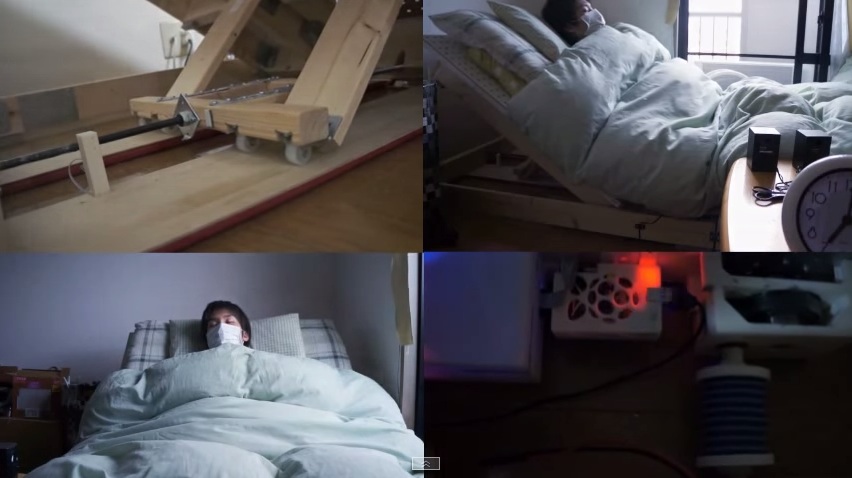 If you’re one of those people struggling to crawl out of bed early in the morning for work, then don’t worry, you’re not alone. But if you need something that would definitely get you out of that sleepy spell, then this Japanese guy might just have the perfect solution for you.

The user first starts his/her day with a timely ring of his phone alarm. At this point of the day, the simple automatic slider starts rolling the room curtain to reveal the rising sun. After a while, if the user still doesn’t wake up, he/she will then be greeted by automatically opening windows, which also activate after a set period of time as a “snooze” option. If a set time passes again and the incoming fresh morning air is still insufficient to wake its user up, the bed would automatically start getting its sleeping user up, accompanied by a sudden boom of music that’s supposed to be stimulating (or irritating) to the user’s ears.

To test if the user is already awake enough, the switch to turn it off gives a set pattern (which is situated way over at the sink by the way). If the user inputs the correct pattern, the alarm is finally turned off. As a bonus, or reward for waking up in time, the system also automatically activates a coffee machine to start pouring the morning coffee. Of course, what else could be a tech-savvy way to end this geeky wake up routine, than with a special self-stirring mug?

The entire setup is named as “The Most Useful Wake Up Machine”, and indeed we might have to agree that it is. If you’re interested to set up one for yourself, its creator has provided a few pointers in his introduction video, as well as the entire schematics at DMM.make.