Thanksgiving is a day for turkey. Black Friday is a day for statistics. Traffic on Thanksgiving from mobile devices edged just over 52 percent of all online traffic, while Black Friday mobile traffic dipped just below 50 percent. According to 24/7 Wall St, sales from mobile devices on Black Friday were about 30 percent higher than last year, accounting for 28 percent of that day’s online sales. Thanksgiving Day sales were below those of the widely hyped day that follows indigestion.Those online shoppers live mostly on the East Coast with Los Angeles wedged in the middle of New York City, Washington, D.C., Atlanta, and Chicago. Smartphones accounted for 35 percent of all on-line traffic, but tablets led the charge in sales numbers and dollars spent by $18.95.

The Apple platform outdistanced that of Google with Apple products typically being higher priced than Google’s. IBM Data reports as Average Order Value: ”iOS users averaged $121.86 per order compared to $98.07 for Android users, a difference 24.3 percent.” The data shows as Online Sales: “iOS sales accounted for 21.9 percent of total online sales, nearly quadruple that of Android, which drove 5.8 percent of all online sales.” According to comScore, Apple has 42 percent of the market, and Android has 52 percent. However, Android’s market share advantage pales beside iOS popularity. 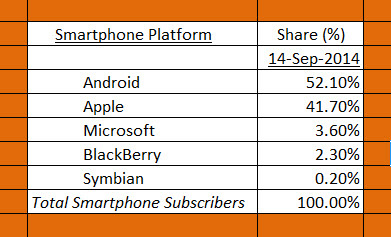 We’ll have to wait to see what Cyber Monday brings after all the online sales that have already taken place over the weekend.