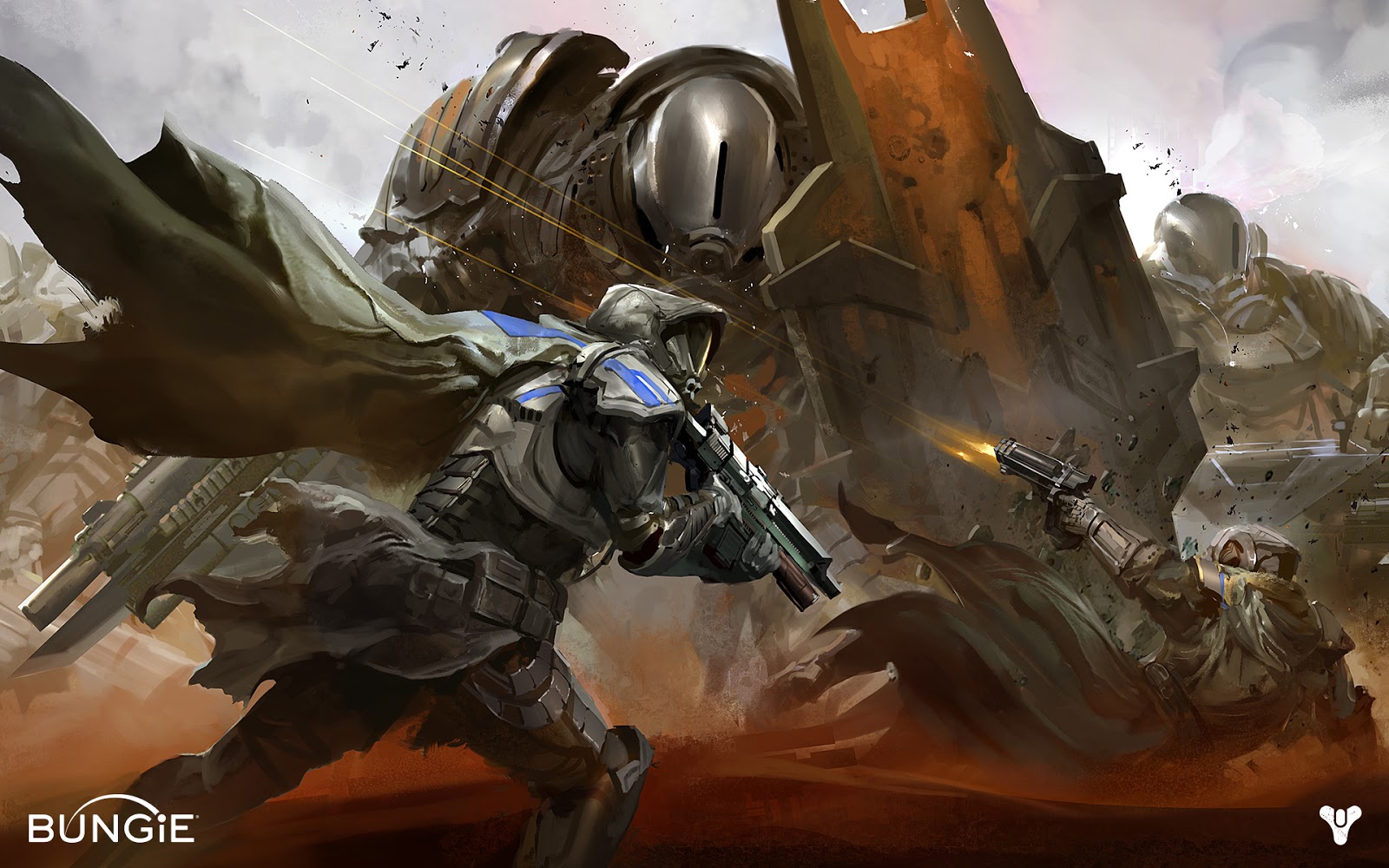 Today’s new Destiny patch brings a host of welcome changes to the MMOFPS.

First and foremost the update will mix up Exotic items quite a bit, as Bungie has effectively adjusted and refined mods on a number of top-tier weapons.

But the most exciting feature is that vendors now sell precious upgrade materials.

Guardians can now trade in Crucible or Vanguard Marks to get Spinmetal, Relic Iron, Helium Filaments and Spirit Bloom. 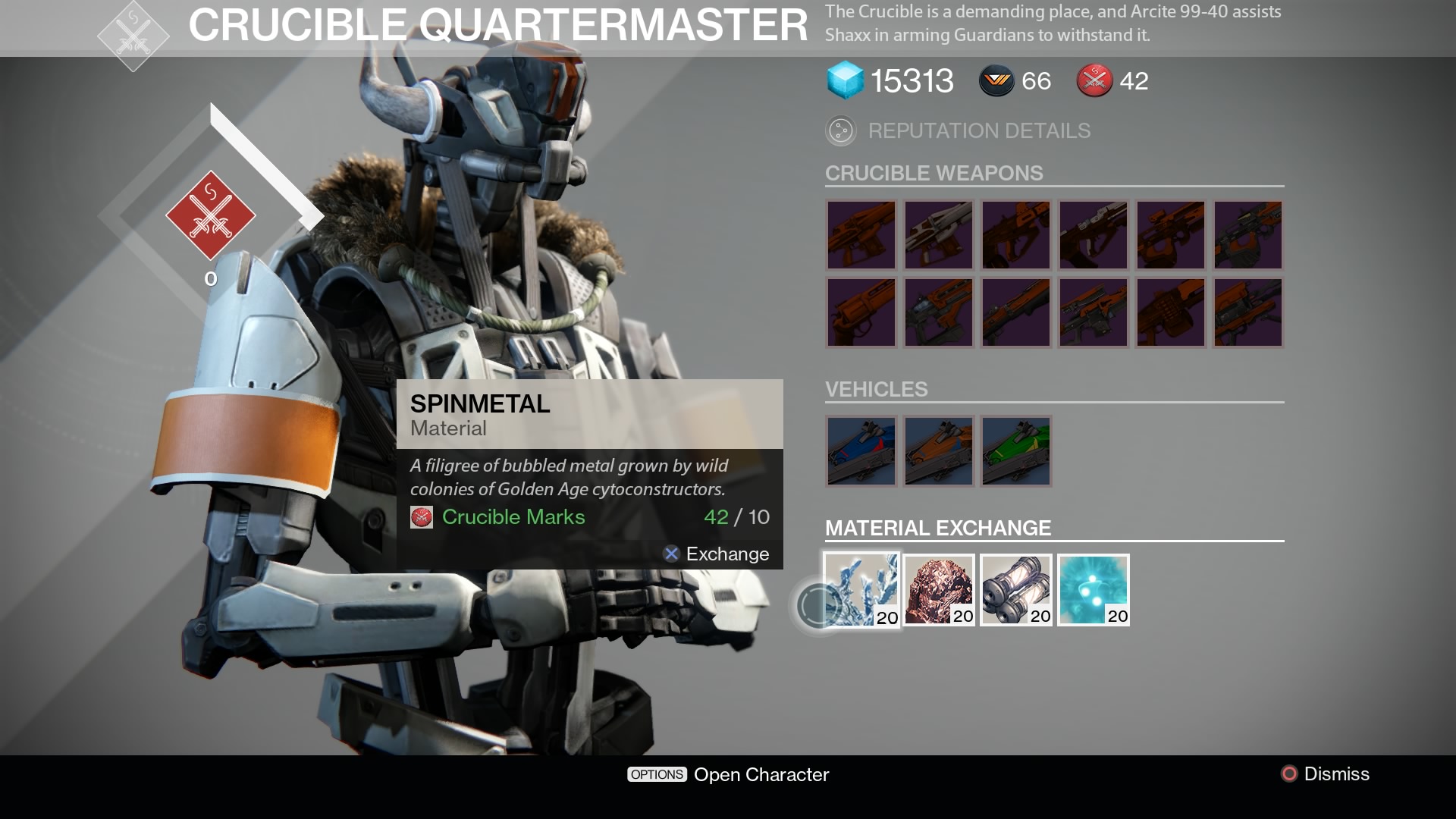 The Crucible and Vanguard Quartermasters in the Tower each sell stacks of 20 upgrade materials per 10 marks. That’s a pretty splendid ratio, especially considering you can rack up some serious marks in the Tiger Strike playlist. It’s like Christmas!

Players have spent hundreds of hours tediously collecting these indigenous interplanetary flora to upgrade their gear. I’ve done it, everyone on my friend’s list has done it, and chances are you’ve done it, too.

It’s not fun and it serves as rather boring refresher in MMO-style farming. And we’ve all spent far too much time in Destiny doing it. 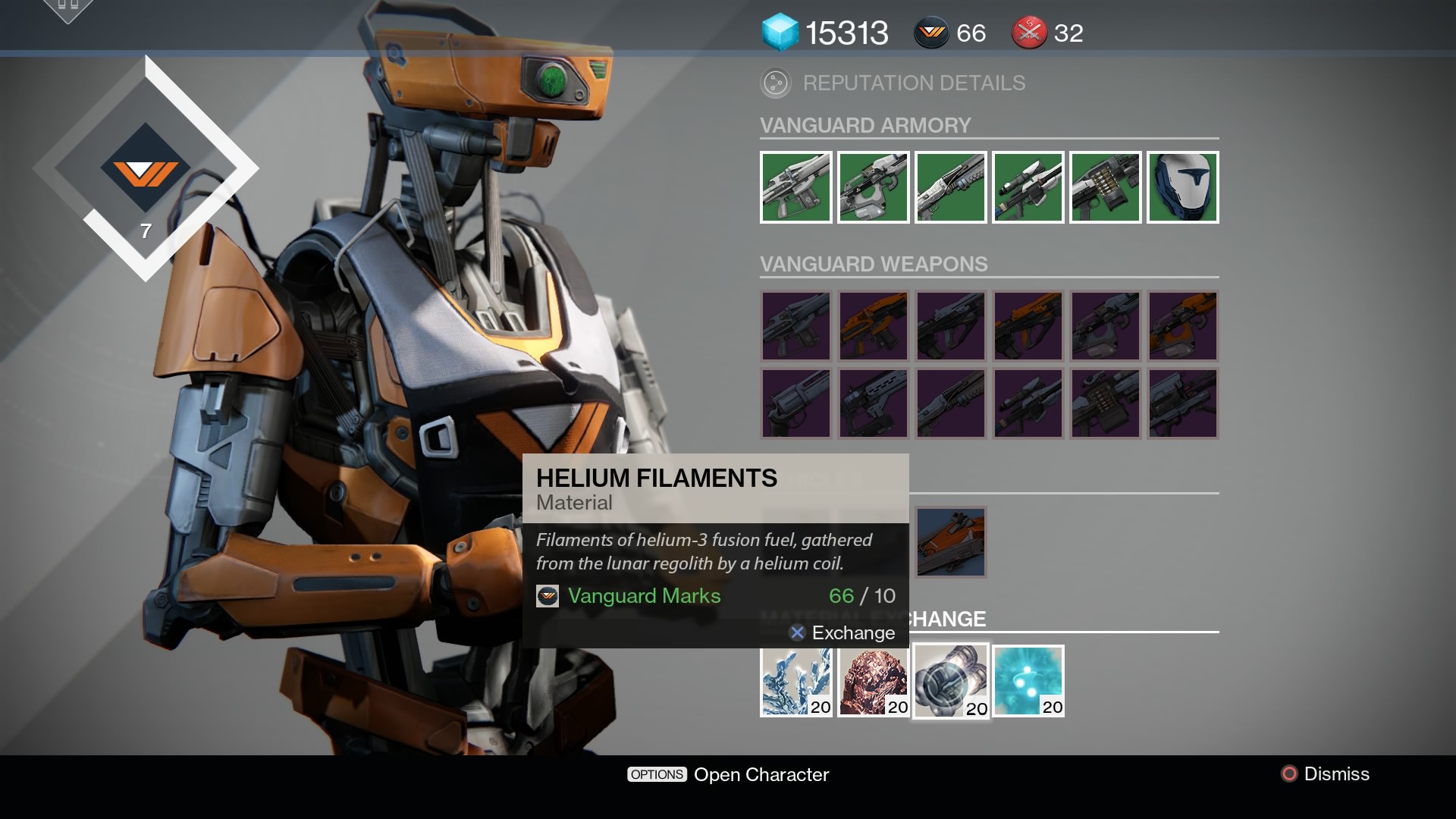 Another change is that Exotics won’t take Ascendant Energies or Shards to upgrade any more. Only Legendary class items will use Ascendant Shards and Energies

Exotics will now use their own exclusive upgrade mats: Exotic Shards. And you’ll only need one.

The developer reveals that these new materials will be needed to fill out the last node and max all Exotic weapons and armor, meaning you’ll need them to max out any given yellow item. It’s a bit of a balancing act for the buffs/stat boosts to existing weaponry.

Exotic Shards can be attained by dismantling an Exotic item or by purchasing them from Xur for 7 Strange Coins. But of course if you already have your items maxed out, this shouldn’t apply to you.

Since you can pick up all the upgrade materials you need, maxing out your gear shouldn’t be hard at all. In fact one might say it’s a little too easy, considering you can pick up a dummy Exotic from Xur, break it down, grab your Exotic Shard and max out your Hawkmoon like clockwork.

The SUROS Regime gets its max damage cut a bit, but is balanced out be an increase in stability.

Already-powerful Exotics like the Thorn handcannon, Hard Light auto-rifle, Suros Regime auto-rifle, MIDA Mult-Tool scout rifle, Hawkmoon handcannon, Plan C fusion rifle, Bad Juju pulse rifle and others have been boosted with slight increases to random stats, making them more effective in both PvP and PvE gametypes. It’s a great and refreshing change to see Bungie beefing out or items rather than nerfing them across the board.

Bad news is that the Templar in the Vault of Glass Raid can’t be cheesed any more.

Cheesing was an exploit wherein players used the impact of specific grenades to push a boss off the edge of the map for an easy victory. But there was an actual reason to cheese the Templar, as your entire team would get extra bonus loot as a result.

Bungie is listening to our feedback; they’ve brought in voice-chat options and have catered do our upgrade mat woes. They’re taking the hint, and I for one am delighted to see how this trend will continue.

Below we have a copy of Bungie’s patch notes for the new update, and we’ll see you starside, Guardian.

Exotics
Exotic Weapons are designed to look, feel, and sound overpowered. At the same time, they are not supposed to break the balance of the game. We hope these weapons challenge the way players think about their loadouts. Exotics will be a constant work in-progress!